"Everything I do is not going right."

So sobs Howard, the adrenaline-junkie diamond dealer gambling addict played by Adam Sandler in "Uncut Gems." Taking place over the course of a couple of days, "Uncut Gems," directed by Josh and Benny Safdie, hurtles along a narrow track over a yawning abyss, following Howard as he attempts to pay down his huge gambling debts by, of course, placing increasingly risky bets. There's the hope that once he pays it all off, he'll wipe the slate clean, and repair some of the bridges he's burned. But everyone around Howard knows this is a fantasy. His addiction is too entrenched. The dazzle of the "uncut gems" in the title is not a surface shine. It glows at the center of the earth, it burns in Howard's core.

It makes sense, then, that "Uncut Gems" would start with a sequence where the camera goes inside a black opal (dug out of the Welo opal mines in northern Ethiopia) which then morphs into the inside of a human colon. The colon of Howard, to be exact, as he endures a colonoscopy. The images on the hospital monitor look similar to the fantastical space of the opal's innards, its curves and layers. This is metaphor writ so large it's brazen, a theme hammered home with refreshing rhetorical candor. The opal is inside Howard, his need for it comes from the basest part of him. He lives in a state of "gold sickness" or "dragon sickness" (so vividly described by J.R.R. Tolkien in The Hobbit), the hypnotic power of gems luring men into madness since the beginning of time, seeking pirate's gold, El Dorado, the Holy Grail, on doomed colonialist adventures. Howard's black opal is the same as any long-besought gem: it emanates a magical pull on all who look upon it. Its power is almost wholly symbolic.

Co-written by the Safdies and regular collaborator Ronald Bronstein, "Uncut Gems" immerses you in Howard's nutty cacophonous world. Howard's jewelry shop in New York's Diamond District is a tiny space with the atmosphere of a three-ring circus. The double entrance to his shop—requiring two buzzes—is a buffer between Howard and the world, giving him (at the most) 10 seconds lead time against anyone looking for him. His assistant Demany (LaKeith Stanfield) hustles clients who might be interested in the flashy items in Howard's inventory, and the latest lure is Boston Celtics star Kevin Garnett (playing himself), waiting in the shop when Howard returns from the colonoscopy. Howard can't resist showing Garnett his latest acquisition: the opal, just arrived from Ethiopia, which Howard is putting it up for auction later in the week (at a hugely inflated price). He tells Garnett about how he feels connected to the Ethiopian Jews who dig up the opals, and his enthusiasm is so passionate it's catching. Garnett asks if he could borrow the opal for good luck at the upcoming Eastern Conference finals, and Howard says yes.

Howard saying "yes" is the first of the many, many terrible choices he makes over the next 135 minutes. He owes so much money that goons follow him around, showing up at his office. These people mean business. His wife (Idina Menzel) seethes with hatred for him. His daughter can barely tolerate him. He's put up his young mistress (Julia Fox) in an apartment he's rented for her. Howard is always on the go, always running out of rooms, racing down sidewalks, charging across lobbies.

And that's the thing about addiction, the thing that "Uncut Gems" really understands. On some level, the stress is the point. The nerve endings are so frayed they need the stress. Howard is useless without panic. So is his mistress, who also suffers from a form of "gold sickness.” It is their main bond. This is not a "cautionary tale" about the dangers of gambling. It's more like a virtual-reality game where you step into Howard's experience.

The Safdies use New York City in ways that haven't been seen since films in the '70s. The city has been so cleaned up and gentrified and homogenized it might be easy to forget that so much goes on at street-level, so much chaos, the marginalized and lost seeking a foothold, the grifters and hustlers slipping through the cracks, working their angles. The Safdies' "Heaven Knows What" was documentary-like in its approach, but their follow-up "Good Time" was a race-against-the-clock thriller, its action sprawling over the five boroughs. The Safdies are nervy, funny, and comfortable with discomfort. Their characters have no access to comfort, and yet in every moment they're striving to escape, hustle, talk their way out of things, talk their way into things, get what they need, what they want. Veteran cinematographer Darius Khondji (a changeup from the Safdies' regular collaboration with Sean Price Williams) brings out the sickly gleam in this world, the green-fuzz of the interior lighting, the glamour of some of the interiors juxtaposed with the sleaze of the others.

In a recent conversation between Adam Sandler and Brad Pitt for Variety's Actors on Actors series, Pitt observed that even though Howard makes all these bad choices in "Uncut Gems," you worry about the guy. It is Pitt's contention that this is because of Sandler's "warm-heartedness," something you always feel, no matter the material. I think there's something to that. You hear people expressing surprise when Sandler gives a good performance. There should be no surprise. When he's given good material, like Paul Thomas Anderson's "Punch Drunk Love," or Noah Baumbach's "The Meyerowitz Stories" (to name just a few), he's as good as it gets. Behind his humor is pain and rage, both of which he is able to tap into. Here, as Howard, complete with goatee, fancy glasses, "club" clothes, he is a portrait of a man living on the edge. He never stops talking. He never stops striving, scheming, shouting, hustling. In his eyes is the devotional gleam of the big score.

"Self-delusion" is a redundant term. All delusions come from a willingness to buy into a fantasy, an off-chance, a long shot. In a delusion, your brain is a cage, and you are your own prison guard, monitoring the perimeters of allowable thought. Delusion feeds addiction, and addiction needs a constant supply of delusion. "Uncut Gems" shows this electrified-fence feedback loop like no other film in recent memory. It's excruciating and exhilarating. 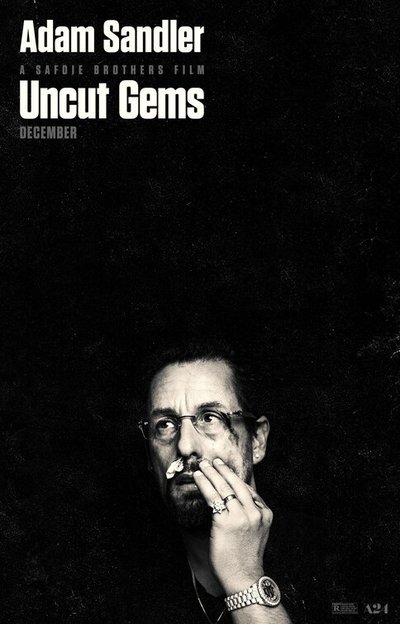