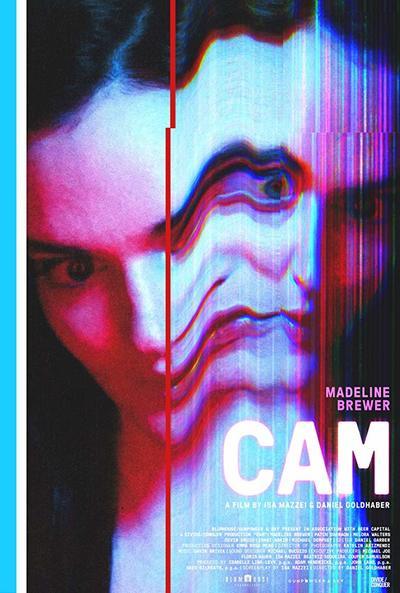 Daniel Goldhaber’s “Cam,” premiering today on Netflix, has two things going for it that instantly elevate it above a lot of genre product: a great concept and an even better performance. The concept is one that the writers of “Black Mirror” are probably kicking themselves for not coming up with first and the performance is from Madeline Brewer, so spectacularly committed here that she sells the technological nightmare believably. Sure, when you sit back from “Cam” and consider its action and message you might have a few questions, but this is the kind of clever jolt to the system we want from horror thrillers—an unexpected commentary on today’s society burrowing its way through an intense story.

Horror and sci-fi have long been the genres most deft at commenting on current fears and societal ills, and so it makes sense that a great deal of both genres has turned its attention to how technology has forever altered the human species. Our obsession with our online personas has brought us to a point where some people have more vibrant e-lives than real ones. There’s a definite sense that we’re losing something to the machines we hold in our hands or place in front of our eyes. Of course, the dehumanization of women through online sex shows that allow for anonymity on both sides of the transaction are another element of the 2018 inter-experience that impacts human behavior in ways we probably don’t even fully comprehend yet.

It’s in that world that “Cam” unfolds, telling us the story of Alice (Madeline Brewer), who goes by Lola on the cam girl site at which she works. Alice hasn’t told her mother (Melora Walters) that 'Lola' is quickly rising up the ranks of the most popular cam girls on the site, fueled by loyal customers like the twitchy Tinker (Patch Darragh) and the gift-giving Barney (Michael Dempsey). Lola’s show is a bit different from the average cam girl, pushing the boundaries of taste and makeup, but in ways that feel unique. Lola tells her friends that she won’t fake an orgasm but the first show we see her do includes an elaborate routine in which she pretends to slit her own throat for tips, complete with excessive fake blood. From the beginning, “Cam” is asking interesting questions about what is real and how far someone is willing to go online for attention.

And then Alice wakes up one day to find Lola online doing a show. Someone who looks exactly like her and has her screen name and loyal customers is in a kiddie pool in a bikini, surrounded by blow-up dolphins. The customer service people at her company and the cops don’t really care that someone has quite literally stolen Alice’s identity. It’s just a cam girl account. What if someone was online with your voice and body doing sex shows? Naturally, Alice starts to crack, but she perseveres, digging deeper into the mystery of how this has happened. And if it’s happened before.

Here’s about the point that I usually write about how this is a “Twilight Zone” or “Masters of Horror” concept that would have been better suited to 30 or 60 minutes, but one of the remarkable things about “Cam” is that this is not the case here. Goldhaber maintains the tension of his ingenious concept from beginning to end, thanks in no small part to Brewer’s completely committed, fantastic performance. It’s a turn that really goes to another level when it essentially becomes a dual one, the dead-eyed “sexy” banter of the faux Lola on screen compared to the increasingly frantic Alice. She’s great and this is the kind of role that should immediately take her to another level.

A few literal questions start to nag in the second half of the film regarding Alice’s behavior, especially around her loyal customers like Tinker and Barney, who one would think would be White Knight saviors to help her, and the subplot about her family’s disapproval feels undercooked, but the narrative questions are displaced by more interesting thematic ones. What if your online persona was completely distinct from you? And then what if it was more popular than you?!?! “Cam” is a fascinating conversation starter driven by a great performance. Turn it on.

The Great Performances of 2018

The Individual Top Tens of 2018