The search for life on other planets has always been about the search for meaning in regards to our own mysterious existence. Stepping aboard a ship bound for the heavens isn’t all that far removed from bidding adieu to life in the mortal sense, causing our loved ones to look skyward, holding tightly to the faith that we will see each other again. Whereas Alfonso Cuarón’s “Gravity” likened a female astronaut’s adventure with her grieving process, as she strives to remain tethered to earth rather than spiral into the void, Alice Winocour’s “Proxima” explores the liberating power of emancipation, whether it be a woman leaving earth or a girl finding her own identity in the absence of her mother.

Along with her co-writer, Jean-Stéphane Bron, Winocour deftly links the alienation of Sarah (Eva Green), an astronaut assigned as a last-second addition to a crew headed for Mars, with that of her daughter, Stella (Zélie Boulant), who must make new friends while living with her estranged father, Thomas (Lars Eidinger), until her mother returns. Neither transition is without a great deal of pain, yet Winocour—who is a mother of a young daughter herself—understands the paradoxes of such a relationship and how it can limit one’s growth when freedom is denied.

Ever since she ignited the screen with her blazing eyes in Bernardo Bertolucci’s “The Dreamers,” Green has upstaged everyone from James Bond to Dumbo with her mere gaze, which is adept at radiating the warring emotions her characters often struggle to suppress. Consider the scene in “Proxima” when Sarah is informed, in the midst of a celebration, that her daughter has missed a crucial flight, thus preventing them from hugging each other goodbye. This is one of many instances in which Winocour nails the tendency of life to toss conflicting feelings at us all at once, and the effort with which Green snaps on a smile to shield her despair is thoroughly wrenching.

Leaving the warm familiarity of earth’s atmosphere for a zero-gravity environment that causes tears to form a ball of water on your cheek is strikingly juxtaposed with Stella’s fresh view of the world as her mother grows increasingly distant. Their frayed connection is hauntingly illustrated by a dropped FaceTime call that leaves Stella’s expression of disappointment frozen on Sarah’s screen. Boulant is a revelation here in how she navigates her character’s evolving sense of self, making her first steps toward forging her own path while grappling with the gravitational pull that leads her back into her mother’s arms. There’s a lovely moment where she insists on holding Sarah for a minute longer in a pool, prompting her mother to check her watch until the girl takes ahold of it herself, savoring each second as she counts them down. “It never stops,” she observes.

“Proxima” is less concerned with the particulars of what draws Sarah to the stars than it is with the difficulty of having a profession that not only separates you from your children for extended periods of time but also places your life in perpetual danger. As co-writer of Deniz Gamze Ergüven’s 2015 drama, “Mustang,” a brilliant portrait of young girls revolting against their patriarchal society in Turkey, Winocour has already proven skilled in depicting the misogyny that women endure on a daily basis. What’s surprising is how this film pivots away from painting various supporting characters as villains at the precise moment we expect them to fulfill our pessimistic expectations.

Crew member Mike (Matt Dillon) exudes all the signs of being a sexist jerk—by suggesting that Sarah will be in charge of cooking while leering at her in the locker room—until it is gradually revealed that he is primarily concerned with the safety of his fellow astronauts, and feels he must challenge his new colleague in order to ensure her seriousness. A night where he agrees to provide her with company pleasingly ends with nothing more than a chaste hug. Similarly, the great Sandra Hüller, whose comedic chops brought down the house in “Toni Erdmann,” plays Wendy, a humorless psychologist who threatens to become an overbearing presence in Stella’s life, stoking the girl’s fears about Sarah’s safety. Yet as the film progresses, it becomes clear that Wendy genuinely cares about Stella’s well-being, and is absolutely correct in encouraging Sarah against having her daughter present at a debriefing session where topics such as “life expectancy in cold waters” are addressed.

The vast majority of this picture is extremely well done, which is what makes its sudden misstep into wish fulfillment sentimentality during the final twenty minutes all the more of a letdown (consider this your spoiler alert). In the span of a single scene, our belief in the main character’s integrity takes such a dramatic nosedive that it nearly sends the entire movie careening off the rails. Had it been revealed to be a dreamed denouement on the order of “The Florida Project,” all would’ve been salvaged. Alas, we’re supposed to be reassured with a quick shot of iodine that Sarah hasn’t proven Mike’s initial suspicions entirely correct, yet her behavior still inadvertently plays into outdated stereotypes of women letting their emotions get the best of them.

What precedes this ill-judged moment is a beautiful reunion—oddly mirroring the final shot of Damien Chazelle’s “First Man”—as Stella has her final pre-launch chat through a glass window with Sarah, who has agreed along with her crew mates to be quarantined for two weeks before liftoff. Boulant plays the scene in a way that illustrates how her character has reached a new level of maturity and made peace with the fact that this farewell is not what she had dreamed it to be. As Thomas had predicted, Stella’s struggles have “worked themselves out.” Sarah’s subsequent reckless decision may have played differently prior to the COVID-19 pandemic, but no matter how well-intentioned her actions may have been, they come across as no less selfish as Dodgers player Justin Turner when he put his fellow teammates at risk after testing positive for coronavirus on the night of the World Series.

When Winocour was asked about this scene during the film’s Q&A at TIFF last fall, she revealed that a female astronaut had admitted to her that she had done the same thing, eliciting guffaws from the audience. Alas, breaking quarantine is anything but a laughing matter in 2020, and it mars the remaining scenes that follow, which are otherwise gorgeous and poignant. Can one bad scene torpedo the merits of a movie as poetic and intricately nuanced as “Proxima”? Not at all, though it does cause what could’ve been a great film to feel more like a missed opportunity. 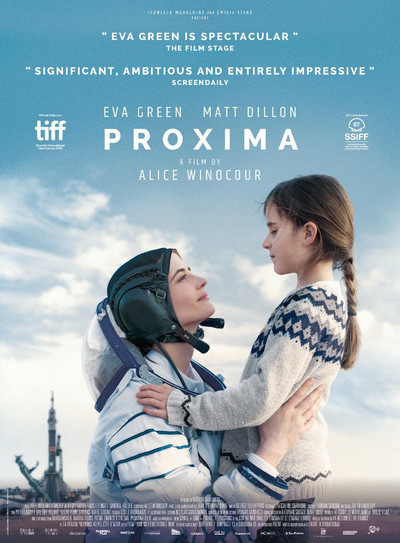