If you want to get an almost first-person sense of what it felt like to fly in one of the earliest supersonic planes or ride a rocket into orbit and beyond, "First Man" is the movie to see. More so than other films about the US space program, including "The Right Stuff" and "Apollo 13," it makes the experience seem more wild and scary than grand, like being in the cab of a runaway truck as it smashes through a guardrail and tumbles down the side of a mountain.

Future first-man-on-the-moon Neil Armstrong (Ryan Gosling) and his fellow Apollo Program team-members zip themselves into insulated suits fitted with bags to catch their body waste, strap themselves into narrow seats, wait hours or days for clearance to take off, then spend a few minutes being shaken and rolled. The vibrations of the trip rattle their bones and the noise scorches their eardrums. There might be a brief moment of beauty or peace, along with a sidelong glimpse through a window of the blue earth, the grey-white moon, or the blackness of space, but that's generally all the aesthetic pleasure they get—and maybe all they can handle. They expend most of their mental energy studying the instrument panels in front of them and trying to process the information that's being fed through their headsets by mission control, knowing that one missed fact or wrong choice could mean their deaths.

To do this kind of work, you have to be the bravest person on earth, or have a death wish. This blockbuster drama from director Damien Chazelle ("Whiplash," "La La Land") and screenwriter Josh Singer ("Spotlight," "The Post") implies that there might not be a lot of difference, and that if there is, the astronauts aren't the people to explain it, because they're steeped in a tradition that forbids admitting you even have feelings, much less discussing them.

Neil, a handsome but tight-lipped test pilot in the mold of Sam Shepard's Chuck Yeager from "The Right Stuff," enrolls in the Apollo program in part because he wants to be distracted from the pain of losing his two-year-old daughter Karen to cancer. Neil's wife Janet (Claire Foy) is grieving, too, but during missions she's stuck at home, or roaming the halls of NASA trying to get information about Neil's safety. To their credit, the filmmakers periodically remind us that, as dangerous as Neil's job is, it's at least a respite from the emotional pain of living with loss—and that the helplessness the wives felt as they sat in the living room watching coverage of the mission on TV, or waiting for the phone to ring, was uncompensated emotional torture.

Every now and then, the movie lets you know that other things were going on in 1960s America besides a race to beat the Soviets to the moon. A brief sequence near the midpoint shows that many African-Americans (who were behind the scenes participants in the space program, as "Hidden Figures" showed, but weren't allowed in planes and rockets) thought the Apollo missions were an expensive distraction from the fight for racial and economic equality on the ground. Much of the white political left and some women felt the same, even when they were inspired by the astronauts' bravery. We get hints of this disquiet in conversations and TV images alluding to Vietnam and social protest, and in glimpses of astronauts' wives stewing in the shadows while their husbands claim the spotlight. Chazelle and Singer deserve credit for allowing notes of national unease to creep into the story; it helps make "First Man" feel truer to the period than other movies about the US space program (although, for its totality of vision, the HBO miniseries "From the Earth to the Moon" is superior).

Unfortunately, none of these notes are developed into anything but side trips or afterthoughts. It soon becomes clear that the director's heart is in the flight sequences, the climactic moon landing reenactment, and the various scenes of Neil tamping down his depression and anger because he's a mid-century American man who understands more about physics and engineering than he does his social conditioning. When Chazelle is examining Neil's inarticulateness, "First Man" becomes a tragedy of American machismo, in the vein of "American Sniper" (which wasn't shy in admitting that its hero kept volunteering for combat duty because he couldn't deal with being a husband and father) and "The Deer Hunter" (in which straight white men expressed love for each other through pain and sacrifice).

Almost every man in the Apollo program is in the same emotional boat as Neil—including Kyle Chandler's Deke Slayton, Ethan Embry's Pete Conrad, Pablo Schreiber's Jim Lovell, Jason Clarke's Ed White, Shea Whigham's Gus Grissom, Cory Michael Smith's Roger Chaffee, William Gregory Lee's Gordon "Gordo" Cooper, and the crewcuts of mission control. They all have the correct Life Magazine corn-fed, square-jawed look, and the actors all do their best to inhabit the time period without fuss. But ultimately, none of Neil's colleagues register as much more than glorified background characters. When Chazelle re-enacts the 1967 Apollo 1 capsule fire that killed three astronauts, it's upsetting because of the matter-of-fact abruptness of the staging (as if a candle had been unexpectedly snuffed out), not because we'd gotten to know and care about the crew. Their deaths register mainly as threats to Neil's safety and the future happiness of his family.

The only actor besides Gosling who makes a strong impression is Corey Stoll as Neil's future Apollo 11 capsule-mate Buzz Aldrin. The character is presented as a wry, talkative fellow who can access his own emotional interior, knows he's handsome and charming, and enjoys acting the role of the cocky space pilot when TV cameras are pointed at him. Neil respects Buzz but sometimes seems annoyed by how comfortable he is in his own skin. Whenever they share the screen, Chazelle and Singer veer a little too close to endorsing the idea that emotional constipation equals manly virtue. If the movie didn't suggest that Neil's stoic nature and suppressed grief make him resent anyone who seems happy, "First Man" might've come across as validating the notion that, after all these decades, the strong, silent type is still the masculine ideal. The first man was, after all, a caveman.

Even when "First Man" stumbles as historical psychodrama, it still represents a giant leap forward for movies about the physical experience of flight. I wouldn't call the test piloting and blastoff-and-orbit scenes artful, exactly—there's little poetry in the images—but I don't think they're aiming for that. They're about single-mindedly putting you inside Neil Armstrong's body and brainpan, and giving you a sense of how hard it must have been to focus, work out equations and flip switches with all that motion and noise battering the senses.

Chazelle and his regular cinematographer Linus Sandgren try to keep the camera on, or with, Neil, whether he's absorbing facts during a NASA briefing, reading to his son at bedtime, fighting with his wife, or walking away from a burning wreck. The objective seems to be to make you feel, by the end, as if you've walked a million miles in Neil Armstrong's boots. On that score, judged solely as a spectacle, "First Man" has to be considered a success—especially if you see it in IMAX format, which imparts astonishing clarity to the images even when Sandgren's handheld camera is shaking so hard that Southern Californians might wonder if the film is doing its job or if the San Andreas Fault has finally called it quits.

Chazelle is an extremely visceral director, more in the mold of a technically adept big-screen showman like Robert Zemeckis ("Contact," "Flight") than the gritty '70s character-driven filmmakers that he cites as heroes during interviews. The musical scenes in "Whiplash" were so intense that they sometimes made you feel as if you were trapped inside a drum during a solo. The large-scale action scenes in "First Man" play like the most hellish amusement park ride ever, so unrelenting that you'll wonder how long you'd have been able to endure the real thing without giving up and pressing the "Eject" button. The three stars at the top of this review are for Chazelle and Sandgren's visuals, Gosling's internalized but rarely mannered acting, the script's ability to communicate Neil's buried emotions without dialogue, and the bowel-rattling sound design. If you watch it in IMAX, add half a star but make sure not to eat beforehand. If you see the movie at night, you may glance up at the moon afterward and realize that it's nice to look at, but you'd never want to go there. 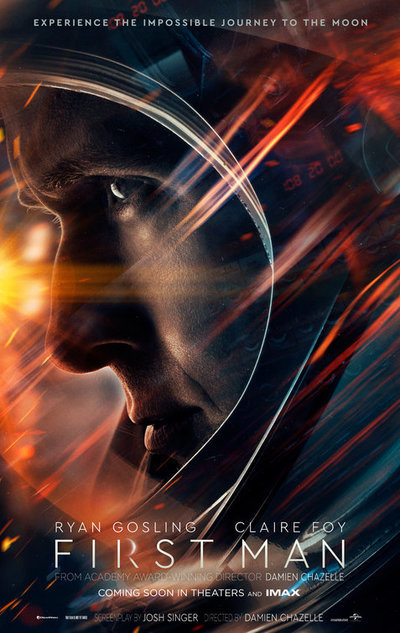