For a while, the camera moves around the room observing the undifferentiated mass of orgiasts indulging in an array of sex acts. Most, if not all, participants are presumably unknown to each other. Soon, the middle-aged guy spots a younger guy and tries to get something going. The younger guy quickly moves away and engages other partners. Then his eyes fall on another young guy he obviously finds attractive. The feeling is mutual, we soon see. The two move toward each other and embrace. The camera observes them as they have sex over a few minutes.

It should be noted that this scene is hardcore, meaning it contains erect penises and sex acts that are shown explicitly. There are two things, though, that set it apart from most pornography. One is that it is very artfully filmed and doesn’t include close-ups of genitals. The other is that it’s not an end unto itself but a set-up for the story that follows.

That story, in fact, is announced and begun in the sex scene, with the looks exchanged between the two guys. They are not simply lustful looks but seem to suggest something more. Love at first sight? Could be.

Referencing Agnes Varda’s New Wave classic “Cleo from 5 to 7,” “Paris 05:59” follows the two young guys in real time from the moment they leave the sex club, shortly after 4:30 a.m., till the minute given in the title. Theo (Geoffrey Couet), who has short brown curly hair, and Hugo (Francois Nabmot), with straight dark hair, start out getting rent-a-bikes and talking exultantly as they wheel through the city.

Recalling not only Varda but also Godard, Rivette and other directors who’ve made visual love to Paris using mobile cameras and high-speed film stocks, this bicycling passage has a lyrical exhilaration in its breathless rush through the beautiful city’s empty pre-dawn streets. The conversation contains its own intoxication, as the two guys begin discussing their carnal but also more-than-carnal attraction to each other.

The emotional up comes crashing down, though, when they stop riding and start recalling what happened at the club. Hugo admits he had an orgasm inside Theo without using a condom, and he’s HIV+. He says he’s on meds and his viral load is negligible, but that doesn’t keep Theo from freaking out. An AIDS hotline they call advises going to a hospital right away. Theo says he doesn’t want Hugo to accompany him and sets off on his own. But Hugo follows him and, at the hospital, they see the doctor together.

In this scene it’s noted that the chances of Theo contracting HIV from that single encounter are less than one percent. Nevertheless the doctor advises his undergoing the currently standard morning-after treatment, which involves taking pills for 28 days. As much as this solution seems viable, it doesn’t banish the tension and mistrust that have emerged between the men since Hugo dropped his bombshell.

The remainder of the film follows the guys as they wend their way homeward and basically try to decide if they want this new relationship to last more than this one night or not. The key here is an attraction that looks from the very first like love, and the film conveys its growth—amid difficulties like those just noted—both delicately and persuasively.

“People tell me to learn to live with AIDS. I don’t want to live with it,” Hugo notes somewhat morosely. “I want to live against it.” With dialogue like this, “Paris 05:59” conjures a world and a moment in time, and it does so with an understated skill throughout. Enormous credit, though, must also go to the casting and performances of the two actors. Couet and Nambot are slender, nice- but not extraordinary-looking twentysomethings who are very believable in their roles, but most of all have a chemistry that makes you wonder how much of their romantic attraction is acting.

Twenty or 30 years ago, the explicitness and authenticity of “Paris 05:59” might’ve made it into a crossover hit. Indeed, Cyril Collard’s “Savage Nights” (1992), which had some of the same qualities, became one of the most honored French films of its era. But today, exceptions-that-prove-the-rule like “Weekend” and “Stranger by the Lake” notwithstanding, such films rarely escape cinema’s gay ghetto. “Paris 05:59,”’s charms are likely slight enough, and its raunch raunchy enough, to keep it from becoming one of those rare exceptions.

Plus, gays of these characters’ age are likely to find it curiously outdated, since PrEP is never mentioned. But then, if you took the specter of AIDS away from the story, it would lose much of its drama. That reality poses interesting questions about the future of films like this. 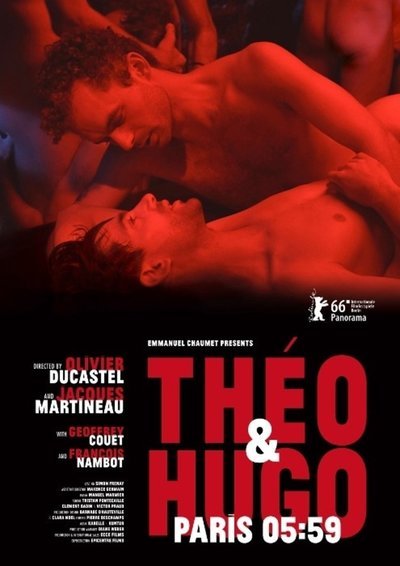