There has been a slight if significant shift in the types of films aimed at adolescents lately. Somewhere between the overwrought gothic romance of “Twilight” and the gross-out ribaldry of “Superbad” exists a funny-sad expanse of melodramatic normalcy aimed at young adults that owes more to the issue-oriented “Afterschool Specials” from ‘70s TV and John Hughes than to Dracula and the Farrelly brothers.

The primary source for this 21st-century upgrade of teen-angst cinema is the sensitive, grounded-in-reality novels written by John Green. I’m not even in the same time zone let alone ballpark of the target demo for last year’s hit based on his “The Fault in Our Stars,” which starred Shailene Woodley and Ansel Elgort as two cancer-stricken kids in love. But it reduced me to an immensely satisfied blubbering puddle of tears—and happily so. The honest treatment of the subject matter, the beautifully rendered characters, the mordant humor and the respectful way the relationships were drawn—including those concerning parents—elevated what could have been a maudlin weeper into cathartic nirvana. That it managed to open to $48 million domestically and grossed $307 million worldwide offered hope that kids born during the past decade and a half will someday have their answer to “Rebel Without a Cause” or even “The Breakfast Club” to cherish.

The current Green adaptation, “Paper Towns,” might not possess the same exhilarating highs and somber lows as “The Fault in Our Stars,” but this teen drama wrapped around a human enigma does share more than a few commonalities, including the same savvy writing team of Scott Neustadter and Michael H. Weber, who also did the screenplay for what is probably the pinnacle so far of this mini multiplex youthquake, 2013’s “The Spectacular Now,” as well as 2009’s “(500) Days of Summer.“ Its director, Jake Shreier (“Robot & Frank”), is once again a relative newcomer hungry to establish himself with a low budget and a troupe of charismatic mostly unknowns .

The smart script is brave enough to venture beyond yesterday’s fleeting Twitter fodder for its pop-cultural references. As a result, “Paper Towns” might be the only movie to ever pay tribute to Walt Whitman’s poetry, Woody Guthrie’s music and the empowering theme song from the “Pokemon” cartoon series. The setup, with its theme of seeing people beyond their public facades and not insisting that they to live up to your fantasy version of them, has more in common with “Gone Girl” than “Fast Times at Ridgemont High.”

The male star of “Paper Towns,” Nat Wolff—who acquitted himself impressively as Elgort’s blind friend in “The Fault in Our Stars”—proves himself to be leading-man material here by conquering the difficult task of making a straitlaced, perfectly normal, high-achieving sweet guy obsessed with the girl across the street  into an appealing character.

Yes, it features yet another plot that revolves around the life-altering events of senior year, this time at a high school in Orlando. And the core relationship is the one Wolff’s Quentin—also known as Q—shares with his two geeky buddies, baby-faced big talker Ben (Austin Abrams) and bespectacled worrywart Radar (Justice Smith). It’s a three-way bromance, but with a key difference: This trio talk and react to the world like teenagers you might actually know, not sitcom-ish wisecrackers.

After an opening segment that has 7-year-old Quentin meeting new neighbor Margo Roth Spiegelman—also known as M—and falling instantly in love, we are introduced to their current-day versions. As close as they were as children, when she would often visit Quentin via his second-story bedroom window, they are now worlds apart socially. Margo, as embodied with feline allure by model-turned-actress Cara Delevingne, has gone her own way and is now the coolest member of the cool crowd. Meanwhile, the still-infatuated Quentin is reduced to catching mere glimpses of his dream girl as they pass in the hallways.

That is, until Margo comes knocking on his window in the dead of the night and demands he drives her around town so she can carry out a series of vandalizing acts inspired by the fact that her rich jock boyfriend cheated on her with one of her friends. Mission completed, the two share an intimate interlude in a high-rise building and even dance to “Lady in Red.”

Quentin gets his hopes up that this could be the start of a beautiful friendship. Then—poof—Margo mysteriously goes missing the next day, right before prom and graduation.

But Ms. M is not one to go into hiding without sprinkling a trail of Amazing Amy-style clues along the way, which occasionally includes leaving behind a spray-painted “M.” Perhaps it’s a Fritz Lang reference or maybe Zorro. But soon Quentin enlists his pals, and eventually Radar’s girlfriend and Margo’s ex-BFF Lacey, to help search her down. Surely, that is what she wants, Q believes.

Almost everyone in the main cast gets a standout moment or two, including Halston Sage—what a name—as the misunderstood Lacey. But  “Paper Towns,” which refers to invented locales that cartographers would use to ensure no one purloined their map, is winning enough that you probably won’t ponder its flaws at least until after you toss your popcorn bag away.

For instance: What kind of parents don’t call the cops when their home is vandalized, or grow suspicious when their SUV suddenly screeches out of the driveway in the wee hours? Also, how laid back do you have to be to express zero concern when your son calls to say that he and his friends are going to skip school and drive all night in the family car from Orlando to a rural area in upstate New York just for kicks?

But even if “Paper Towns” reduces its authority figures to paper cutouts, what it fully realizes is more than compensation. 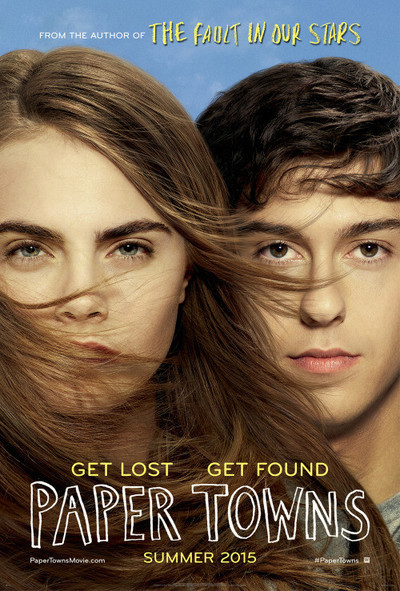 Rated PG-13 for some language, drinking, sexuality and partial nudity - all involving teens