On Tuesday night, at a Los Angeles multiplex, writer-director Cameron Crowe introduced his latest film, “Aloha,” to a packed audience of media and regular moviegoers alike. This would be a highly unusual gesture in and of itself—filmmakers rarely show up randomly just to say hi, especially ones who are as established as Crowe—but what he said was just as unusual.

It was a plea: Take this film for what it’s intended to be, a love letter to Hawaii. Tune out the peripheral noise that’s surrounded it for months. Have an open mind and heart and enjoy yourself. He never specifically said the words “Sony hack,” although that’s clearly what Crowe was referring to: the release of embarrassing e-mails that revealed his star-studded romantic comedy was in trouble based on early screenings. “Aloha” also has drawn criticism for its perceived lack of Hawaiian characters (although there are indeed some).

Even if you didn’t know any of that going into the film, though, the sensation of tinkering and re-tinkering would be inescapable. This is the rare Crowe film that could stand to be a little longer, that could use some more development in its characters and breathing room in their relationships. As it stands now, “Aloha” feels like several films at once, crammed together and sped up, with results that are emotionally hollow and narratively confusing.

You can see the editing, and not in a good way. It’s obvious in big developments that make you go: “Huh?” but also within individual scenes, with cutaways to different camera angles that disrupt the flow of dialogue. And the dialogue itself—the thing Crowe made his name on in his great, early films “Say Anything …,” “Jerry Maguire” and “Almost Famous”—so frequently strains for his signature poignancy that it feels like a parody of a Crowe script.

For all its needless complications, “Aloha” can be summed up simply: It’s “Elizabethtown,” in Hawaii. So much here is so similar to Crowe’s 2005 film, which previously had been considered his least successful. It features a man who’s hit bottom, personally and professionally, who must return to his home of sorts to right some wrongs. In the process, he meets a perky and quirky young blonde who sees the innate good in this flawed creature and aggressively makes it her mission to make him happy again.

Bradley Cooper is the Orlando Bloom figure in the equation and Emma Stone is his Kirsten Dunst—his manic pixie dream girl, if you will, since “Elizabethtown” is the film that inspired that phrase.

Cooper stars as Brian Gilcrest, whose job is a little vague, but it seems he’s a former military man who nearly died in a missile attack in Afghanistan. He now works for billionaire private defense contractor Carson Welch (Bill Murray), which requires him to return to his former Air Force base in Hawaii—something to do with launching a satellite AND helping gain the native Hawaiians’ blessing for a new pedestrian gate. Why him, of all people? Doesn’t matter.

Conveniently, the pilot who flies him there, the stoic Woody (John Krasinski), happens to be married to Brian’s former girlfriend, Tracy (Rachel McAdams), the one who got away. Woody and Tracy now have two kids together and a seemingly happy life—until they don’t, suddenly.

Brian’s escort and minder while on the base is Emma Stone’s Captain Ng. She’s abrupt and uptight and all business—until she isn’t, suddenly. One minute, the up-and-coming officer is snapping crisp salutes; the next, she’s smiling radiantly, casually playing an acoustic guitar and singing a traditional folk tune with the locals. As she repeatedly points out, she’s a quarter Hawaiian—and a quarter Chinese, if you can believe that—and so the mysticism within the culture moves her deeply. This person’s actions make absolutely no sense from one scene to the next, including her out-of-nowhere but admittedly entertaining dance routine with Murray’s character to Hall and Oates’ “I Can’t Go For That.” (Soundtracks are always crucial to Crowe, the former rock journalist; this one also includes the Tears for Fears classic “Everybody Wants to Rule the World.”)

Naturally, Brian and Ng will fall for each other, which Crowe depicts in part through the tried-and-true cliché of a shopping montage. But he also must reconcile his failed relationship with Tracy. And he must do Carson’s bidding, which puts his current relationship with Ng in jeopardy. Besides Murray’s underwritten character, “Aloha” also struggles to make room for Danny McBride as a longtime friend of Brian’s who’s now in charge of the base (his primary personality trait is that he messes with his fingers while he talks) and Alec Baldwin as the gruff and insulting general, a role Baldwin could perform in his sleep.

So yes, there’s a lot going on here. Stranded in the middle of it all in a flimsy love triangle are three actors who normally radiate charisma: Cooper, Stone and McAdams. French cinematographer Eric Gautier (“The Motorcycle Diaries,” “Into the Wild”) photographs them all beautifully, with lighting that always captures their piercing eyes and strong cheekbones just right. And the Hawaiian scenery is, of course, lovely. But a movie with such likable stars in such a gorgeous setting should feel like a vacation itself, not work. 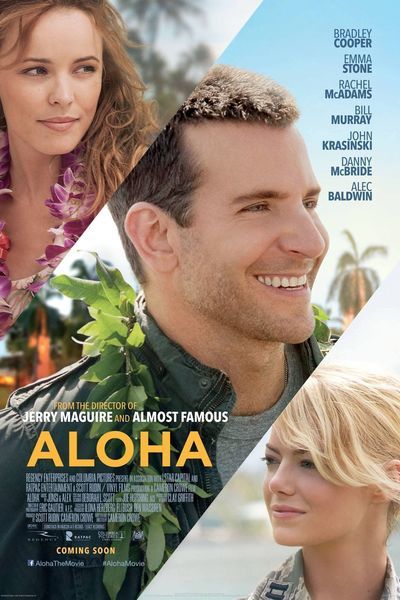 Rated PG-13 for some language including suggestive comments