Because the Internet moves with the speed and ferocity of a hornet swarm, there's a chance that by the time you read this, Spike Lee's American remake of "Oldboy" will already have been stung to death. If so, too bad. This American version of Park Chan-Wook's Korean thriller is Lee's most exciting movie since "Inside Man"—not a masterpiece by any stretch, but a lively commercial genre picture with a hypnotic, obsessive quality, and an utter indifference to being liked, much less approved of. The studio that released "Oldboy" doesn't seem to like the movie any more than critics: it stifled pre-release discussion by making reviewers sign non-disclosure agreements, and forced Lee to shorten an apparently much longer director's cut. So barring a miracle, this film is doomed.

Like Park's version, "Oldboy" tells of a drunken, abusive lout named Joe Doucette (Josh Brolin) who's imprisoned for a long time by a mysterious jailer. He gets clean in prison, then escapes to learn the identity of his tormentor and punish him. Like Park's version, this one's a reptilian brain film, all violence and sex and fear and revenge and crying and screaming. The lighting is dark but the colors are supersaturated, especially in scenes with a lot of blood, neon, or wet pavement. The camera goes much lower or much higher than you expect it to, and peers at the characters from disorienting angles. Bruce Hornsby contributes a score in a Bernard Herrmann vein, an instrumental chorus to the modern urban version of a Greek tragedy.

As Joe, the alcoholic ad executive, Brolin is a raw nerve at first—a bloated and haggard man whose smile and laugh are false. From certain angles he looks and sounds like the young Nick Nolte: a brutish alpha male gone to seed, but not without a certain tenderness. Drink is ruining his life and estranging him from his wife and newborn daughter. We sense that his alcoholism is a symptom of long-held guilt that will be explained as the tale unfolds, and we're more right than we could imagine. Joe finds himself trapped in a jail cell made up to look like a hotel suite, getting mysterious updates on the room's TV about the life of the daughter that he never got to know. He stays there for twenty years (five more than in Park's version). After seeming eons of self-pity capped by a suicide attempt, he starts a Travis Bickle-like regimen of Spartan self-improvement, winnowing himself down into a lean, mean killer, and finally escaping to seek vengeance against his tormentor.

Where the film's first half is a Kafka-esque fable of guilt and punishment, the second is a riff on the criminal revenge flick, with Joe working his way through the underbelly of a New York City that's been reimagined as a landscape of the mind. He joins up with a drug clinic worker played by Elizabeth Olsen and slowly begins piecing together the identity of his jailer: a rich and rather effete sadist (Sharlto Copley of "District 9") who knew Joe a long time ago, and who now lives like a drug dealer from an '80s cop thriller.

Lee restages some famous (or infamous) moments from the original, including the hammer fight, pictured here as a more elaborately choreographed scene that unfolds over two levels of a warehouse populated by criminals and ruled by a glowering boss played by Samuel L. Jackson (seemingly channeling his character from "Unbreakable"). In other cases, the film changes small details (including specific violent acts and lines of dialogue) or else jokingly acknowledges places where even it won't go (the scene in the original in which the hero devours a live octopus is thrown away by having Joe glance at one in a restaurant fishtank).  It all leads to a climactic revelation identical to the one in Park's movie, though key details of the back story have been changed, and the denouement is more harsh and sad. If you haven't seen the original "Oldboy," which provided the template for most of this one, I won't spoil it here. Suffice to say that Lee and his screenwriter Mark Protosevich do a good job of keeping their cards close to their vest, and when they finally play them, the result has a sick, powerful charge.

It's worth pointing out here that Park's film is not an original story, but an adaptation of a Japanese comic book of the same name. Both versions find ways to visually suggest that you're reading a big-screen graphic novel with pages that come to life. The compositions in Lee's movie have such a painterly or "illustrated" quality that they might as well have thick black lines marking off the edges of the frame. At no point does the film try to be "realistic," except when it comes to the strong, simple emotions that its characters feel. Lee's "Oldboy," like Park's, obeys its own illogical logic (a hotel room hallucination starring Lee's brother Cinque has the goofy randomness of a joke in a David Lynch movie). The whole thing flows as dreams flow, linking situations to other situations and images to other images in a seemingly free-associative manner.

At its wooziest, Lee's direction reminded me of Brian DePalma or John Carpenter in nightmare reverie mode, or Alfred Hitchcock when he seemed possessed by whatever horrible muses drove him. It's purely intuitive, at times musical, direction. The lack of a political dimension seems to have freed Lee to be looser and more (cruelly) playful than usual. There's news footage on Joe's hotel room TV, but when we see, for instance, scenes from 9/11 or the Iraq war, it's not meant to drive home anything but the passage of time and its effect on Joe's psyche. The performances are all over the map, in what struck me as a DePalma-like way. Some actors give fairly naturalistic performances (Brolin and Olsen) while others (Jackson and Copley) chew the scenery into fine shreds and then pluck them from their shiny teeth. Lee presides over the madness with a droll serenity that says, "This is the movie; deal with it."

The big problem with Lee's "Oldboy" is that for all its dark confidence, it doesn't reimagine the original boldly enough. This isn't like Martin Scorsese's "Cape Fear," David Cronenberg's "The Fly" or Jonathan Demme's "The Manchurian Candidate"—or the recent superhero-inflected version of "Carrie," which I liked better than most critics—all of which drastically rethought their inspirations. Lee's "Oldboy," in contrast, is more like "Point of No Return," the American remake of "La Femme Nikita." It's so close to its predecessor in so many ways that I can't see much reason for it to exist, except to give xenophobic viewers an experience similar to the original, but minus the subtitled Korean and the octopus-eating scene—and with a more ostentatiously cartoonish bad guy, and lot more monologuing to explain the convoluted plot.

That's not a bad thing, though, when you consider the current climate for mainstream American films. For people who haven't seen the original "Oldboy" or anything like it, this will be a rare studio release that feels shocking and abrasive and perverse and in some way new. I'd love to sit through Lee's movie again in a theater with newbies who came to see a straightforward revenge picture starring a guy who's been locked up for a long time and have no idea what they're actually in for: a swan-dive into the toxic id. Few American auteurs are making mainstream studio movies in the vein of Spike Lee's "Oldboy": unabashedly hardcore genre pictures that aren't afraid to treat sex and violence as colors on a palette, and get nasty and raw, in that seventies-movie way. Park's "Oldboy" was no skip through the daisy field, but this one is even harder to watch, sometimes indulging in savagery that blurs the line between Old Testament morality play and straight-up exploitation.The filmmakers seem obsessed with making everything as extreme as possible, replacing, for example, a bruising bit of hammer torture with a prolonged sequence in which the hero uses an X-acto knife to slice a dotted-line-shaped pattern into a former jailer's throat.

Roger Ebert's four-star review of the original praised it as "the kind of movie that can no longer easily be made in the United States" thanks to content restrictions imposed by "a puritanical minority." The same sentiments apply here, but even more so, because Park's film came out ten years ago, and things have only gotten more restrictive since then. Plenty of international filmmakers are working in this mode—Park, Takashi Miike, Nicolas Winding Refn and Lars von Trier spring immediately to mind—but not too many English-language directors, aside from Quentin Tarantino and sometimes Oliver Stone ("Savages"). Martin Scorsese and David Cronenberg used to make this sort of picture all the time, but haven't in a while, perhaps because it's just too much for some people, and "just too much" movies tend not to get made at a major studio level because the financial stakes are too grave. I don't like or approve of everything in "Oldboy," but I'm glad it exists. The multiplexes are filled with PG-13 movies that should have been R-rated movies, released by studios that don't make adults-only genre films anymore. This is one such film, starring a real actor, directed by a real director. It deserves to be seen and argued about. 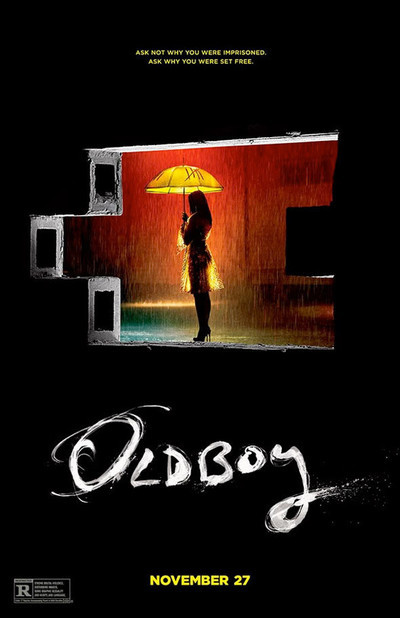