An air of possibility permeates “My Salinger Year,” the kind one typically inhales in their younger days, wondering with impatience and curiosity what the future might hold. The wide-eyed pull of this sensation is so powerful in the otherwise mild and docile film’s early moments that you can’t help but ease into the story’s allure at once.

Set against the backdrop of New York’s intellectual literary scene of the mid ‘90s, the near-period “My Salinger Year” has something else that will be instantly recognizable to most people, especially to those working in more artistic and unconventional fields. That thing is the silent panic of being stuck doing a job that was supposed to be just temporary; perhaps a bill-paying springboard towards idealized pursuits and career goals. So when the young, spirited, poetry-loving recent-graduate Joanna Rakoff (Margaret Qualley) nabs one such gig as a literary agency assistant in “Monsieur Lazhar” filmmaker Philippe Falardeau’s movie, you can’t help but feel for the aspiring writer. You wish for her success at this transition, while rooting for her eventual departure, just so she can pursue her actual vision of the future before years slip away.

It’s a familiar yet high-stakes circumstance, the risky sensation of which “My Salinger Year” can’t sustain beyond energetically proposing it in its first act. Still, writer/director Falardeau’s faithful adaptation of Rakoff’s 2014 memoir, which chronicles the author’s time working at one of New York City’s oldest literary agencies (Harold Ober Associates goes unnamed in the film), miraculously maintains a certain appeal, thanks in large part to Qualley. With her expressively enormous eyes, boisterous energy and inviting (yet frustratingly overused) voice-over, she leads the way as Rakoff, who chooses NYC’s mahogany-deep, bookish mystique over the sunny rhythms of Berkeley and a thriving musician boyfriend (Hamza Haq). Even though her performance, at least when compared to her uncontainable presence in movies like “Novitiate” and “Once Upon a Time in Hollywood,” registers as somewhat tame here mostly due to the film’s own meekness, Qualley nonetheless possesses ample charm and plausibility as a young woman at a major junction. The littlest details in her presentation here—from her sometimes hesitant demeanor, to acts as ordinary as slowly savoring an expensive dessert at a fancy hotel patisserie—leave an existential mark on the screen.

Again, this is the mid-'90s—a time when some wished email was just an annoying trend, smoking indoors over boozy lunches was still a thing, and the world was becoming anyone’s oyster fast with internet starting to dominate daily lives. It’s amid this atmosphere that Rakoff was placed in her agency job inside a sepia-colored, majestically wood-heavy workplace by a staffing firm. Looking at the photos of the literary geniuses that decorate the walls of her new office—we’re talking about the likes of Agatha Christie and of course, the famously reclusive J.D. Salinger—she quickly feels right at home. But then just as rapidly, she realizes that her boss Margaret (a subdued Sigourney Weaver, delivering a minor-key but affecting performance) prefers someone who isn’t an aspiring writer—“writers usually make the worst assistants,” we hear her say, not forgetting to tell the new novice that in order to succeed in this business, she should read some living writers.

The poker-faced, cold-mannered chief who is dead-against computers (used mostly as decorations in her office) or anything technological, soon puts the rookie typist Joanna in charge of dictations as well as an unusual task: reading all the fan mail that “Jerry” (that is, Salinger) receives and sending them a stock “we won’t be able to share this with Salinger” reply, before shredding the letters. We learn that they adopted this precautionary measure after Mark David Chapman’s assassination of John Lennon, citing Salinger’s The Catcher in the Rye as an inspiration for the murder—Joanna is supposed to use her judgment and report the crazies.

The obvious point of comparison for “My Salinger Year” is the far superior “The Devil Wears Prada,” with the dynamic between Joanna and Margaret closely resembling that of Anne Hathaway’s green Andy and Meryl Streep’s imposing Miranda. Often, you wish something bolder, more explosive and humorous from the former movie in the vein of the latter, but instead, Falardeau’s exercise only tentatively feels its way through Rakoff’s fascinating true story. The stakes in this movie gradually diminish in their intensity, even when Joanna, overtaken by the voices that write letters to the iconic author, decides to engage with them by responding to a distinct few. How could she not, when the people who write them actually walk in circles around Joanna in flesh-and-blood form (a nice visual and narrative touch, with one of them memorably played by Théodore Pellerin of “Never Rarely Sometimes Always”), and demand to be heard by their favorite wordsmith?

Your wish won’t be granted if you come to “My Salinger Year” hoping to understand the legendary but lonesome author more, and grasp how Joanna—who apparently hadn’t read a single page of his work until she started working at the agency—managed to impress him. In fact, it's shocking, even phony when we hear Salinger’s chipper voice on the phone for the first time, talking to the young woman as if he already knows she’s the real deal. Perhaps relying too much on our goodwill for Joanna and Qualley’s gifts to sell any emotion, Falardeau doesn’t deepen the bond between the famous author, whose presence is fleeting in a movie that carries his name in the title, and the burgeoning assistant.

And yet, the film's strangely entrancing aura persists in spite of it all, with melancholic cinematography and lovely notes of production design that studiously touch everything—from the dusty shelves of the bookstore Joanna’s increasingly unsympathetic and dismissive NYC boyfriend (Douglas Booth) works at, to the cheap, hilariously sink-less apartment the couple shares together. “My Salinger Year” sometimes drags and falters with questionable tonal shifts. But it’s never a complete waste of time to witness a young woman grow into her voice on her own terms, especially when her canvas is this cinematic. 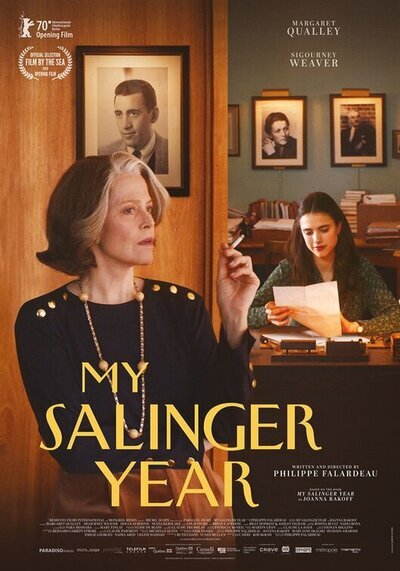 Théodore Pellerin as Boy from Winston-Salem