“I’m in LOVE, Mom!” a teenager cries out to her mother with a heady mix of girlish giddiness and adolescent angst. But the object of her affection isn’t a boy, or even another girl. It’s God, and her ardor is powerful enough to drive her to devote her life to Him as a nun. Writer/director Margaret Betts explores this mystical passion in “Novitiate,” her thematically ambitious, technically-precise feature debut.

A movie about nuns in the '60s may not sound exciting. It may not even sound vaguely intriguing. But Betts wisely depicts these young women as individuals who contain multitudes, even within such a structured setting. They’re full of contradictions as they figure out who they are and what their place is in the world—just like any young woman in any walk of life. These teenage girls, however, have chosen to dedicate themselves to God—to marry Him, as they say in the vernacular, which includes donning a white gown and veil and taking vows. It’s a decision Betts portrays with open-heartedness and without judgment, an unusual and admirable feat in a film about organized religion.

And yet there’s something exotic about this sacred realm: a sheltered, silent convent where stone walls, immaculate grounds and rigid rules can only contain secrets for so long. “Novitiate” explores what happens when the girls’ natural sexual urges begin to bubble up—for men they’ve not yet met, for each other, for God Himself—and how they clash with the inherent chastity of their calling.

It’s a time of flux for the Catholic Church, though. “Novitiate” takes place just as the changes of Vatican II are going into effect throughout the world—radical, liberal shifts in ideology that are meant to foster openness and inclusiveness, but which fly in the face of hard-liners’ long-held beliefs and practices. As the Reverend Mother—a cruel leader who hasn’t set foot outside the convent’s gates in 40 years—Melissa Leo is chilling and often deliciously over the top. She intends to run things the way she always has, with an iron hand and a raging temper, and finds it increasingly difficult to do so.

Her young postulants—who aspire to become novitiates before taking their finals vows—aim to please her every step of the way, but they also undergo moments of questioning and doubt. We endure this demanding experience with them through the eyes of Cathleen (Margaret Qualley in a star-making performance), the aspiring nun who proclaims her love for God at the film’s start. At first, her choice seems like an act of rebellion against her single mother, a profane, chain-smoking atheist. Julianne Nicholson is excellent as always in the role, a no-nonsense spitfire and voice of reason whose brashness cuts through a deliberately-paced film that can be quiet and restrained to a fault.

As Cathleen gets further into her training, though, she finds the strength of her faith repeatedly tested. Reverend Mother warns the girls from the get-go that she’s “the voice of God” on Earth, and that hard work awaits them. She’s R. Lee Ermey from “Full Metal Jacket” in a floor-length habit, sadistic and manipulative as she separates the wheat from the chaff.

Cathleen’s devotion manifests itself in primal ways, a potentially shocking notion that Betts depicts with understated intimacy. Betts’ camera does wonders with Qualley’s open, expressive face. And she remains tasteful in her approach as the arduousness of the training steadily takes its toll on Cathleen, body and soul. Again, though, hers is but one experience.

Rather than indicting the church itself, Betts seems more interested in exploring what drives these girls on the brink of adulthood to pursue such a rigorous spiritual quest—and what prompts some of them to abandon it. As Sister Evelyn, Morgan Saylor gives a wrenching monologue during a ritual in which she’s forced to examine her faults before the Reverend Mother and her fellow novitiates; conversely, Dianna Agron provides a much-needed source of warmth as the girls’ trainer, who embraces Vatican II’s changes at her own peril.

“Novitiate” finds room for all these viewpoints; appreciating the dedication it takes to live such a life while also questioning its suppression of individuality and emotion. This willingness to embrace such complexity is a bit of a miracle in itself. 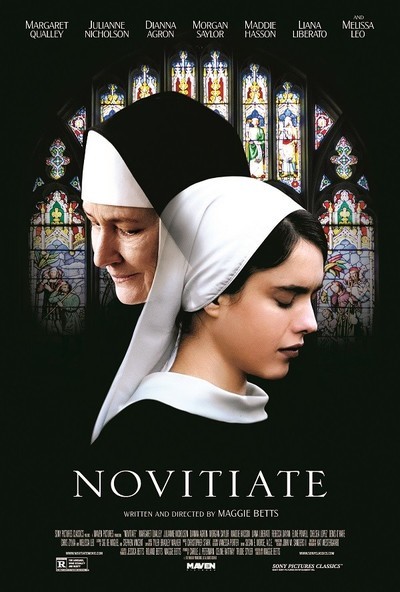 Rated R for language, some sexuality and nudity.