Reviewing Alonso Ruizpalacios’ “Güeros” here three years ago, I called it the best debut feature I’d seen in the past year as well as the best movie from the ever-fecund Mexican cinema in recent memory. “Museo,” the director’s sophomore feature, builds on its predecessor’s promise very handily. A quasi-caper comedy about two layabouts who hit the road after stealing some priceless artifacts from Mexico City’s Anthropology Museum, the new film combines the filmmaker’s distinctive stylistic verve and droll wit with the talents and charisma of Mexico’s leading international movie star, Gael Garcia Bernal.

Both of Ruizpalacios’ features radiate a fondness for the textures and peculiarities of life in Mexico City, and both revisit questionable episodes in the metropolis’ late-20th century history. Where “Güeros” looked back at the university student strikes of 1999, “Museo” concerns a notorious crime that took place on Christmas Eve, 1985. As I understand it, Ruizpalacios’ and Manuel Alcalá’s screenplay offers a very loose, fictionalized version of the actual theft of these objects, many of which have only recently have been recovered.

If there’s a Spanish word for “slacker,” it would roughly fit the two guys at the center of both Ruizpalacios features. Yet while the do-nothing students in “Güeros” were cut off from family life and almost totally idle – they claimed to be “on strike from the strike” – the pals in “Museo” are well into their thirties and have been living at home way too long as they haphazardly pursue degrees in veterinary medicine. Juan Nuñez (Bernal) also has recently taken a job in the Anthropology Museum in order to support his marijuana habit, and there he evidently learned enough of the museum’s operations to conceive of the heist he plans to execute with his bestie Benjamin Wilson (Leonardo Ortizgris).

Granted, neither Juan nor Benjamin seems motivated, disciplined or, frankly, smart enough to bring off even a much less elaborate crime than this one. But one of the cheeky pleasures of Ruizpalacios’ filmmaking is the way he introduces absurd improbabilities into otherwise realistic stories, which keeps us guessing as to the intent of the storytelling. Another pleasure is how meandering and unpredictable his offbeat narratives are. Going into “Museo,” we may know that we’re in for a story about a heist, but Ruizpalacios spends the first quarter of the movie introducing us to Juan and Benjamin’s quirky friendship and uncomfortable situations with their families, which surely are prime motivators for their criminal aspirations.

Benjamin’s situation is simplest: his father is mortally ill, so he’s reluctant to execute the theft and take off as Juan proposes. Juan, meanwhile, has a large family that gathers for Christmas in a way that seems to promise spats and insults, even as he for the first time must endure the chagrin of dressing up as Santa Claus. His dour father (Alfredo Castro) appears perpetually disappointed in him, and to make matters worse, Juan can’t pull off the heist without borrowing dad’s car.

When, in the dark of night, Juan and Benjamin enter the spectacular Museum of Anthropology, with its masses of pre-Columbian treasures, they are able to elude guards and remove scores of art works, including an especially valuable jade mask. But as soon as they’ve gotten away with their loot, they begin to get a glimmer of something they hadn’t contemplated before: its meaning to Mexicans. As the television news relays the public outcry over the thefts, Juan’s dad angrily brands the thieves cowards and traitors who should be hung in the public square.

There’s a sense in all of this that Ruizpalacios is probing Mexican identity and its connection to the civilizations that existed in Mexico prior to the Spanish invasion. The theme continues when Juan and Benjamin hit the road with their loot and end up in Chiapas, where they seek out a friend who’s giving lectures in English to tourists at the Palenque ruins. Inside a Mayan temple, Juan half-jokingly discusses with the guide the theory that the underground sculptures here depict a Mayan king about to take off in a spaceship. Here, as in subsequent mentions of American mystical author Carlos Castaneda, present-day imagination and pop culture intertwine with the relics of an alluring, inscrutable past.

Our two thieves have come to their pal hoping he can help them sell their treasures. But what results is a trip to Acapulco where they dress up in suits and go to the swank home of a British art collector (a superb turn by Simon Russell Beale), who doesn’t take them seriously for a second. How, he asks, do they think they could possibly sell these artifacts? It’s inconceivable. They’re world famous and now the whole world knows they’ve been stolen. No one, not even the sleaziest dealer, would risk taking them.

Earlier in this scene, before the boys get the big kiss-off, the collector tells them about the dispute over the rights to a sunken Spanish galleon carrying gold worth $500 million. While he’s talking about this, the camera turns to an aquarium and spends a little while gazing at the gold-colored fish swimming there. This is typical of the unexpected visual wit that Ruizpalacios employs throughout. In both of his films, his assured compositions and other stylistic strategies convey an easy, practiced mastery together with a joy of filmmaking that is infectious. Here, he receives notable support in the terrific work of cinematographer Damián Garcia and composer Tomás Barreiro.

There are also important contributions from the actors. Ortizgris, who was one of the leads in “Güeros” and whose character here narrates the tale, brings a soulful melancholy to Benjamin. And Bernal adds to his excellent body of work with a performance that’s vibrant but subtly shaded, making us care about Juan’s quest even as we sense its futility. 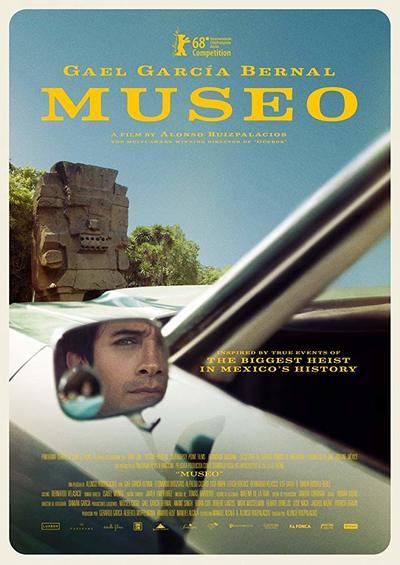