Prof. Moriarty is renowned as Sherlock Holmes’ most notorious archenemy. But the world’s greatest detective grapples with an even more relentless foe in “Mr. Holmes,” the latest big-screen incarnation of Arthur Conan Doyle’s literary creation. His name? Mortality. His game? Inevitability. And the game is definitely afoot in 1947, as the elderly super sleuth attempts to crack some of the mysteries that continue to haunt him at this late stage of his life.

There are more than a few clues as to why director Bill Condon would like to erase the bad taste left by 2013’s “The Fifth Estate,” his botched attempt to capture the enigma that is WikiLeaks creator Julian Assange (as played by another Mr. Holmes, Benedict Cumberbatch), with this intriguing if only semi-satisfying Sherlockian enterprise.

For one, “Mr. Holmes’ provides a perfect chance for a reunion with Ian McKellen, who was Oscar-nominated for his wily and witty work as the original “Frankenstein” director James Whale in 1998’s “Gods and Monsters,” which won the filmmaker an Academy Award for his adapted screenplay. “Mr. Holmes’ also features one of his stars from 2004’s “Kinsey,” Laura Linney, who earned an Oscar nod as the noted sex researcher’s wife. Here, she dowdies herself down nicely as Holmes’ often-disapproving housekeeper.

Condon does right by both actors again, although the film is at its best as a showcase for the splendid and spell-binding Sir Ian, who has taken on two other pop-cultural icons, Gandalf the wizard and X-Men nemesis Magneto, since they last collaborated. Much like “Woman in Gold,” where the glowing presence of Helen Mirren was compensation enough to sit through a rather spotty enterprise, the 76-year-old actor—donning rivulets of extra wrinkles and a padded aquiline nose—overcomes a script with an excess of flashbacks to convince us that we are truly witnessing the one and only Sherlock in his dotage.

Not that Holmes, first seen as a 93-year-old retiree spending his waning twilight years at a picturesque cottage by the sea in the southern part of post-World War II England, isn’t attempting to fight back against the infirmities of old age. He has taken up beekeeping as an avocation, partly to gather royal jelly that supposedly wards off forgetfulness.

When we first see him, the former private eye is freshly back from a Japan that is still reeling from the effects of the atom bomb after securing a batch of a mysterious restorative herb known as prickly ash. Or, as his disbelieving physician calls it, “ashly prick”—which is as close to bawdy as “Mr. Holmes” ever gets.

There is a fount of welcome youth to be found on the premises to fill in for the late Dr. Watson, Sherlock’s faithful sidekick, in the form of the widowed housekeeper’s young son. The collusion between a crusty yet still-ticking Sherlock and Roger (a tiptop Milo Parker, whose boyish resilience and innate curiosity is reminiscent of onetime Disney child star Bobby Driscoll) as he teaches the lad about both bee farming and the art of detecting is the heart and most compelling part of “Mr. Holmes.”

There is something sadly discomforting in witnessing this genius in decline, his blue eyes going opaque to indicate senior moments and his fading voice expressing deep regret over the past, especially his valuing of logic over emotion. In order to pay Roger back for his services and also prod his own memory, he devotes himself to recalling details of his final and least successful case in story form, which the boy eagerly reads as each page is done. As Holmes scribbles what happened on parchment, we are taken back to 1917, when the husband of a woman named Ann Kelmot (Hattie Morahan) hired Holmes to check up on his wife’s strange behavior following two miscarriages.

The case itself ultimately proves less an involving puzzle for the audience than a lesson for Holmes in humility—a state that he has rarely if ever exhibited in his many incarnations, whether in the original tales, Basil Rathbone’s cinematic version from the ‘30s and ‘40s or Jeremy Brett’s TV portrayal in the ‘80s and ‘90s.

In fact, Condon has some fun with having the elder Holmes head to the theater to check out one of the overwrought B-movies based on Dr. Watson’s much-embellished written renderings of his friend’s exploits. That it is Nicholas Rowe, who played the title character in 1985’s “Young Sherlock Holmes,” appearing in the black-and-white picture is a neat trick, indeed.

But then we also must deal with less-interesting flashbacks to Holmes’ recent foray to Japan, where a local guide (Hiroyuki Sanada) helps him find the supposedly rejuvenating plant. This plot strand eventually sets up the film’s redemptive conclusion but falls somewhat flat.

Actually, a certain placidity seeps into too much of the film, even if McKellen is consistently enjoyable and gets a chance to share a nice moment of interplay when a still-dapper Holmes and Kelmot eventually meet on a park bench. But whatever tension exists onscreen primarily is in Sherlock’s mind. And, in this movie at least, it is like watching a door oh so slowly being shut. 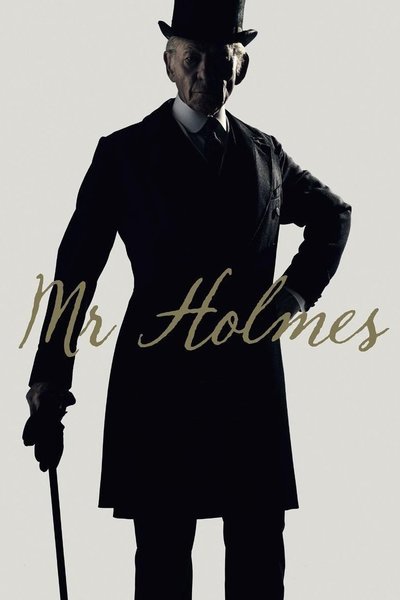