This time, it’s personal and, for the most part, the outcome is better for it.

Last year, George Clooney’s “The Monuments Men” squandered what should have been a perfectly fine basis for a wartime thriller—a squad of art experts sent to rescue great European works that were either stolen from the Jews or put in harm’s way during World War II—by losing its narrative grip and falling strangely flat.

“Woman in Gold,” directed by Simon Curtis (“My Week With Marilyn”), is a more intimate history-making variation on a similar theme. Not only does it have more than enough narrative to go around. It is blessed with Helen Mirren, lusciously luminous even with aging makeup as Maria Altmann. Revelations cause this shrewd yet cultured octogenarian, Holocaust survivor and Los Angeles transplant to decide 60 years after the fact to initiate her own personal recovery mission of masterpieces snatched from her family’s stately Vienna apartment during the Nazi annexation of Austria.

At this magnificent point in her career, Mirren doesn’t even need a crown anymore to exude majesty. She is in charge of all her faculties as a performer and can’t help but draw our attention, whether it’s her character’s clipped Old World accent or how she slowly unveils her growing resolve to see her goal through despite the odds.

Gilding the script, which strings together multiple story strands surrounding Maria’s eventual landmark legal case that would allow reparation to Jewish descendants, is a mother lode of platitudinous sentiment that will likely prove pleasing to the masses but will irk those more cynically inclined. In addition, the welcome indulgence in the photographic splendor of Viennese streets scenes, architecture and interiors provide a gorgeous distraction from a couple unfortunate acting choices, a few too many officious authority types standing in Maria’s way and a half-hearted escape sequence.

True, matters do drag in the latter stages when the plot boils down to a courtroom procedural that is so drawn out that it relies on regular updates on how many months have passed since the previous scene. Although a portion that plays out in the Supreme Court allows British actor Jonathan Pryce to provide a show-stopping take on Chief Justice William Rehnquist.

At least “Woman in Gold” quickly produces an enticing visual hook by opening with the creation of the central object of contention: “The Portrait of Adele Bloch-Bauer,” the shimmering jewel of a painting by Gustav Klimt that inspires the film’s title and functions as a muse that hauntingly hovers over the proceedings. This so-called “Mona Lisa” of Austria—the subject of which was Maria’s aunt, whose husband owned the piece after she died years before the war—ended up being the main tourist attraction in the collection hanging in Vienna’s Belvedere Museum. No way would the government nor the institution’s overtly snide curator portrayed here let Maria have her way without a protracted fight.

The movie begins in earnest when Maria finds letters among her late sister’s effects that mention the paintings. She calls upon J. Randol Schoenberg, a friend’s struggling lawyer son and grandson of famed Austrian composer Arnold Schoenberg who is deep in debt, has a wife and infant to support and is starting a job. Hiding behind nerd-specs, a closely cropped hairstyle and a wall of social awkwardness, Ryan Reynolds might seem a strange choice for Dame Helen to commandingly cajole. But while they aren’t exactly Oscar and Felix (or even Judi Dench and Steve Coogan in the similarly structured “Philomena”), they do strike some odd couple chemistry now and then as she agrees to break her vow of never returning and accompany him to her homeland in order to seek restitution and justice. For her, it’s less about money—and the works are worth many, many millions—and more about righting a grievously overlooked wrong.

It’s kind of quaintly adorable how Randy, as he is called, is taken aback when the aristocratic Maria tries to buy him off with homemade strudel (the old “I made it just for you” ploy). However, Reynolds is unfortunately saddled with Katie Holmes as his wife, whose function is to vacillate from smiling and supportive to scowling and scolding as required. While his light touch is often appreciated, the actor is less convincing when his character undergoes his own spiritual awakening after visiting Vienna’s Holocaust memorial and breaks down in tears while recalling his own ancestors who suffered persecution.

Several noteworthy supporting players are barely allowed the chance to make any impact. After his breakout in “Rush,” Daniel Bruhl should by all rights be beyond the type of foreign journalist ally role that he is stuck with here. And Charles Dance seems to still be looking down his nose and doing his finger-wagging bit from “The Imitation Game” as the head of Randy’s law firm.

Interestingly enough, a better match for Mirren is someone who never even shares the screen with her. As the young Maria in flashbacks, Tatiana Maslany, the spitfire star of the sci-fi TV series “Orphan Black,” beautifully mirrors Mirren’s regal essence in her facial expressions and body language, with her hair helpfully echoing the character’s late-life style.

Speaking German with subtitles, Maslany single-handedly enlivens these passages to Vienna in the ‘30s, although she and Max Irons as opera-singing husband Fritz make for a pretty pair. Oddly missing are any references to Fritz having been sent to Dachau or that the couple had four children. There are, however, some rather effective depictions of abuse and humiliation heaped publicly upon the Jewish citizens while gleeful crowds cheer on the Nazis.

While Mirren unquestioningly rules this roost, one cast member’s late arrival onscreen did get the audience murmuring in recognition. Namely, Lady Grantham herself—Elizabeth McGovern—who appears as a judge during one of the key moments in the legal case. One can assume that the “Downton Abbey” star took the slim part as a favor for her husband, who happens to be the director. Although her actions at least provide Mirren with a reason to juicily observe: “I always thought there should be more women judges.” Then again, Lord Grantham (Hugh Bonneville) showed up in “The Monuments Men.” Let’s just say she fares better here than he did in there. 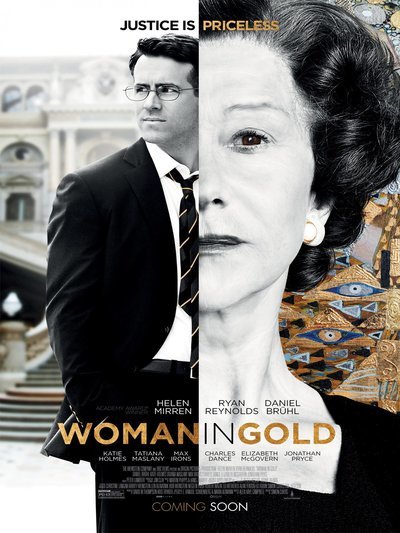 Rated PG-13 for some thematic elements and brief strong language