The most surprising thing about director/writer/star Edward Norton’s “Motherless Brooklyn” is how drastically it departs from its source. Jonathan Lethem’s National Book award-winning novel focused on a Lionel Essrog (Norton), a detective with Tourette’s Syndrome posing as a reporter to investigate the murder of his boss and surrogate father (Bruce Willis’ Frank Minna), who plucked him and several other boys from a Catholic orphanage and trained them to be hard-boiled gumshoes. Along the way, Lionel uncovers a conspiracy that criticizes the gentrification of New York City during the last part of the 20th century. Lethem’s book was set in the 1980s, but Norton has transposed the tale to 1959, which makes Lethem’s playful, retro-tough-guy, Dashiell Hammett/Raymond Chandler affectations seem more organic, while unfortunately making the film’s feel conceptually less odd and special. Daringly—or misguidedly, depending on how you feel about staying faithful to source material—Norton has also fused Lethem’s novel with material from Robert Caro’s classic biography The Power Broker. Alec Baldwin plays the Big Bad, Moses Randolph, a master builder modeled on Robert Moses, the un-elected autocrat who ripped apart the neighborhoods of New York City, making it more hospitable to cars and displacing hundreds of thousands of working-class and poor residents, many of them nonwhite.

The end product is another modern noir in the vein of “Chinatown,” “The Two Jakes,” “Who Framed Roger Rabbit,” “Mulholland Falls,” and so many period TV dramas focusing on tough guys in hats, where the investigation of a seemingly straightforward crime leads the stalwart hero up the social ladder until he finally confronts the person responsible for every other character’s misfortune, an embodiment of wealth, power and venality so connected that he probably can’t be taken down, only bruised a bit. (Lionel’s guide and ward is Gugu Mbatha-Raw’s Laurie Rose, a political activist helping African-Americans resist displacement; they turn out to have more in common than they initially thought, and Norton resists the urge to turn the character into a combination love interest and information delivery device, letting Mbatha-Raw create a real person with a believable connection to her community.)

The second most surprising thing about “Motherless Brooklyn” is what a crowd-pleaser it is, despite its determination to be both a stylish period detective story and a tutorial on how institutionalized racism, civic corruption, and gentrification are braided together in American life. The storytelling leans too hard on verbal exposition, particularly during the second half, but it’s remarkable how cleanly the film lays out its conspiracy and defines every character in its large cast, from Minna’s wife Julia (Leslie Mann) to Norton’s colleagues and former orphanage-mates (Dallas Roberts, Ethan Suplee and Bobby Cannavale, 100% credible as a sleazy alpha) to Laurie’s supervisor, neighborhood activist Gabby Horowitz (Cherry Jones), to the inhabitants of Brooklyn’s working class and poor Black community (standouts include a Miles Davis-like trumpeter played by Michael K. Williams, and a club owner and World War II combat veteran played by Robert Wisdom). There’s also a brutal henchman (Radu Spinghel) so gigantic that Norton might as well have pulled a “Police Squad!” and cut the top of his head off at the frame line.

Norton, his editor Joe Klotz, and the movie’s diverse and skilled cast inject lots of humor and clever bits of character business into the story. Even the darkest or most upsetting scenes are leavened with the sort of deadpan wit that we used to associate with old detective and film noir pictures—the kind where characters entered rooms preceded by their own shadows, had a cutting remark for every situation, and carried lighters even if they didn’t smoke.

You get to the point where you expect the characters to do things they always do, even when it might jeopardize the success of whatever mission they’re on: character-based suspense, rooted in personality. Will Lionel blurt something out during an interview with a witness that will ruin his shaky cover story? Will Laurie’s zeal for justice jeopardize Gabby’s activist campaign, which has to be cognizant of racial resentment by the whites who run the city? Will Randolph’s desire to immediately break and humiliate any public officials who stand in his way torpedo his plan to remake New York? These are the kinds of questions that settled in moviegoers’ minds more often during earlier eras, when films like “Motherless Brooklyn”—genre exercises about realistic characters doing things that could actually happen—were a more common sight on big screens.

Although pans of this film have accused Norton of optioning the book twenty years ago cynically hoping to win an Oscar for playing a character with a disability, his performance as Lionel largely avoids showboating and self-aggrandizement. He embraces the unavoidable humor of Lionel’s verbal explosions during delicate conversations without turning the character into, as another character describes him, a “freak show.” We get to know Lionel and his distinctive traits as the story unfurls, laughing with him rather than at him, and appreciating how deftly he manages a series of life-or-death tasks despite the burdens imposed by his condition. He’s too old to play the character described in Lethem’s book, but this doesn’t hurt the movie. In fact, watching a fortysomething man who’s still coping (like Raw’s character) with the wounds of childhood as well as societal marginalization makes Lionel a sadder, more delicate creation.

The movie suffers a bit from having such an unrelentingly one-note bully as its villain. It’s clear that Donald Trump, whom Baldwin has often played on “Saturday Night Live,” was an inspiration for this fictionalized Moses-like monster, particularly the way he talks about women and people of color, but the way Norton, er, integrates the two strands—racism/sexism and lust for power—diminishes the political by rooting it too simplistically in the personal. And at nearly two-and-a-half hours, “Motherless Brooklyn” is arguably too long for its own good. It’s easy to imagine the film taxing the patience of audiences who can’t sit through a story like this without checking their phones; it’s the kind of story where, if you look away for a minute, you might get lost. But the period details, humor, strong characterizations, and mostly graceful articulation of complex material make “Motherless Brooklyn” mostly a pleasure to watch.

Most striking of all is the unabashedly political nature of the project. It’s rare to see a big-budget American film that deals so bluntly with complex issues that affect moviegoers every day, albeit couched in the atmosphere and language of anther time. For the most part, Norton’s “Chinatown” fetish pays off in subtle as well as obvious ways. The script weds its sociopolitical elements to characterization and plot so deftly that it never feels as if the filmmaker is awkwardly pausing one kind of movie and swapping in bits of another.

“Motherless Brooklyn” is strongest when  diving into the heart of what clearly sparked the filmmaker’s imagination in the first place, as when Norton gives the film over to a public meeting about urban planning and racism. The film puts Lionel at the back of the room and has him watch and listen while Jones’ Gabby and various citizens confront the officials who represent money rather than democracy. The sequence feels as if it were guest-directed by a muckraking dramatist like Ken Loach or Spike Lee (who cast Norton as the lead in “The 25th Hour”), and there are many more like it. This is far from a perfect movie, but it’s passionate, controlled and smart—a throwback to another era of American cinema, not just American life. 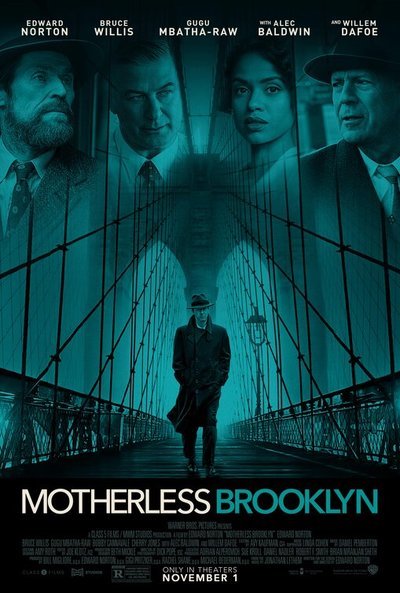 Rated R for language throughout including some sexual references, brief drug use, and violence.