This is a movie that’s been sitting around for a while, having premiered at the Sundance Film Festival in 2018. Since then, several of its key stars have gone onto great things. Harrison has shown impressive range between “Luce” and “Waves.” Jerome won universal acclaim for his crucial role in the Ava DuVernay miniseries “When They See Us.” And Washington has starred in a couple of little movies called “BlacKkKlansman” and “Tenet.” Watching them here, in a time capsule of sorts as they were all on the verge of exploding into the culture, is one of the film’s few pleasures.

The debut feature from veteran commercial and music video director Anthony Mandler—whose prolific output includes working frequently with Rihanna, Jay-Z, Drake and the Jonas Brothers, among many other top acts and brands—offers some visual flair, but it’s distractingly clunky and self-aware. Based on the 1999 book of the same name by Walter Dean Myers, “Monster” is simultaneously heavy-handed and inert. It spells out all its messages about the injustices young, black men too often suffer at the hands of police and the court system—an all-too necessary and relevant topic, sadly—yet there’s very little to its characters, rendering their struggle superficial and hollow.

Maybe the first-person narrative structure worked better on the page. In adapting Myers’ Young Adult novel, Radha Blank (the creative powerhouse behind “The 40-Year-Old Version”), Colen Wiley, and Janece Shaffer have maintained the device of having the lead character, a 17-year-old aspiring filmmaker, describe his day as if it were a screenplay, complete with scene headings like: “INT. Courtroom.”

“In the light, during the day, it felt like a movie. This is that movie. My story, written, directed, and starring Steve Harmon,” Harrison says as part of the film’s extensive use of voiceover. Often, we’re forced to hear Steve explain what we can see with our own eyes without offering any sort of insight or sardonic twist. The approach repeatedly draws attention to itself and away from the legitimate drama he’s experiencing.

What Steve’s going through is harrowing, to be sure. He’s a likable, goodhearted and conscientious student at the prestigious Stuyvesant High School in New York City with a bright future. All that gets thrown into jeopardy when he’s wrongly accused of being part of a deadly bodega robbery in Harlem. Mandler begins the film with grainy security camera footage of two men storming into the convenience store and killing the clerk before running away. Steve, in the wrong place at the wrong time on the way home from school, gets swept up with the suspects (played by Washington and A$AP Rocky, credited here as Rakim Mayers)—acquaintances from the neighborhood—and charged with felony murder. Witnesses during the trial merely see a bunch of young, black men and are quick to condemn them all.

Hudson and Wright as his parents—a questionable casting choice, given that Hudson is only 13 years older than Harrison—are understandably devastated, but their fear is all that defines them. Ehle is steely and wise as always as the public defender assigned to his case, and she’s consistently a standout regardless of the material. But she can only do so much with generic lines like: “He’s not who you think he is,” in response to a plea deal from the bulldog prosecutor (Paul Ben-Victor). He, too, is a cliché as he relentlessly paces the courtroom to an overbearing drum solo, branding Steve with the label that gives the film its title.

Mandler flashes back and forth between Steve’s trial and incarceration, rendered in bleak grays, and joyous, colorful memories of his freedom, including the time he’s spent with his girlfriend (the captivating “Selah and the Spades” star Lovie Simone). Besides being beautiful and flirty, there’s not much to her, either.

“We see Steve before, riding his bike on the way to school,” Steve tells us as he’s ... riding his bike on the way to school. He also recalls the lessons he’s learned in his high school film club, where Nelson as his teacher and mentor literally shows the group “Rashomon,” as if we couldn’t figure out for ourselves what “Monster” is aiming for in exploring the unreliable nature of memory. “I just want to know who’s telling the truth,” one classmate comments. “You think there’s only one truth, Alexandra?” he responds. It’s cringe-inducing in its obviousness.

Despite the slick variety of shadings and textures Mandler employs to bring the story to life, the ending feels anticlimactic, like the tidy wrap-up at the conclusion of a TV procedural. Harrison is so charismatic, and his character is so abidingly decent, there’s never any doubt about his innocence or tension as to his fate. In retrospect, the comparison to Kurosawa probably wasn’t the best idea. 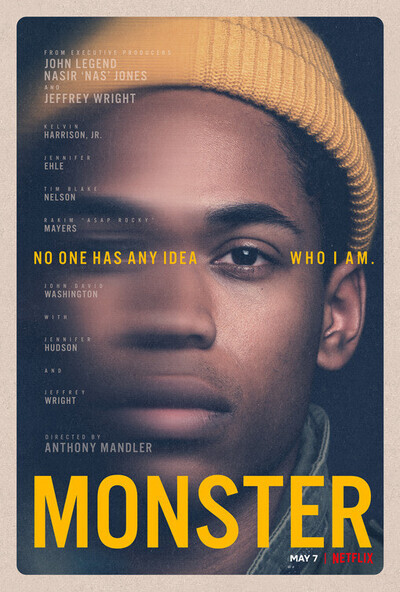