Selah and the Spades

Seated like a queen at the start of the movie that features her name, Selah (Lovie Simone) is inarguably a member of high school royalty. She’s the head of her own faction, known as the Spades, and she’s a head cheerleader. She’s someone most everybody says hello to, even if they’re not friends. Unfortunately, like many an allegory, myth and Shakespearean tragedy have warned us, power corrupts, and Selah’s bid to hold onto her prep school’s queen bee status brings serious consequences and a humbling lesson.

“Selah and the Spades” begins by laying out the groups at war with each other, threatening the balance of the student-run crime rings of illegal drugs, illegitimate parties, underground gambling, and paying classmates to do your homework. Selah and her co-conspirator Maxxie (Jharrel Jerome) lead the Spades, the group responsible for procuring drugs for students. She has no heir apparent to follow her after graduation, and the group may be dissolved or absorbed by one of their rivals. That is until Selah strikes up a friendship with a transfer student, Paloma (Celeste O'Connor), a fresh-faced photographer trying to figure out where she fits in this cliquey new school. Selah sees potential in her new apprentice, so she begins to teach her the less pleasant sides to their on-campus business, like using intimidation and physical violence to get fellow classmates’ respect. When Paloma believes she’s got things figured out on her own, it brings out Selah’s envious side, putting both girls in danger.

Tayarisha Poe’s feature debut includes touches of “Bring It On,” “School Daze” and “Dear White People,” the young gang conflict of “The Warriors” and “West Side Story” by way of prep school culture like in “Rushmore.” There’s even an extra hint at “Rushmore” in the illustrated drawings introducing each faction and its leaders. The film, which was also written by Poe, focuses on the two girls’ relationship and explores the complicated negotiations we sometimes make in order to fit in. At first, Selah’s intentions seem pure—she sees a bit of herself in Paloma and decides to mentor her—but when she loses control and Paloma disagrees with her violent leadership style, Selah’s jealousy leaps out, we see that their friendship was always on her terms all along. The inter-faction drama gives Poe’s stylish high school drama many of the hallmarks of this schoolyard category, but it's the evolving relationship between Selah and Paloma, their insecurities and clashing leadership styles that lend this movie its most thrilling action.

From the moment Selah is shown on her wicker chair throne off-campus, "Selah and the Spades" is impressively filled with style. Through the lens of cinematographer Jomo Fray, the film is vibrantly colorful yet moody, dripping with teen angst. The woods outside the school where the factions meet look green and appealing, a welcome escape from the shadowy halls and old stuffy buildings that make up the prep school outside of Philadelphia. There are a few scenes where Poe breaks from the traditional beat-by-beat storytelling for a stylish interstitial scene, like when Selah and the cheerleading team tell the newly arrived Paloma how they address double standards by holding on to what little freedoms they have as high school girls. “They always try to break you down when you’re 17,” says Selah adding that it’s because they get no respect as teen girls. It’s a fun, almost “Cell Block Tango”-style monologue in a montage of cheer moves, but it’s also a talk-to-the-camera declaration of independence to teachers and parents. It’s one of the strongest scenes in the movie.

Poe’s direction and Fray’s cinematography create a sense of wonder and liveliness for the students, even as the administration is closing in on their racket. There’s a strangely beautiful senior prank involving jewel-toned water that almost looks like a piece of art. Kudos to the production team led by Valeria De Felice for orchestrating so much effort into a brief and meaningful scene as the school’s authority figures are blocked by the will and efforts of their students. Each party scene manages to look almost dreamy, brightly colorful at the moment, but in the harsh light of day, revert back to an empty space. It’s like how fondly we might remember the dances or house parties we went to in our youth, but upon reflection, it wasn’t the spaces that made them stand out—it was the music, the lights, the people that shared this experience with us that made it unforgettable.

With its creative approach to a familiar story about power struggles, “Selah and the Spades” takes these girls and their problems seriously with all the respect their characters crave. “You know you don’t have to be perfect all the time,” Paloma tells Selah. It’s a crushing summation of the pressures put upon many students and the pressures they put on themselves. Hopefully, few follow Selah’s reactionary path, but there is so much in both her and Paloma’s characters that feel intensely relatable, like their shared fear of being left out. No one, not the campus queen or the new kid on the block, ever wants to be in that position. For Poe, “Selah and the Spades” is a declaration of her talents as a filmmaker and a showcase for the stories she wants to tell.

Note: Chaz Ebert is an Executive Producer on this film. She had no editorial oversight or input on this review. 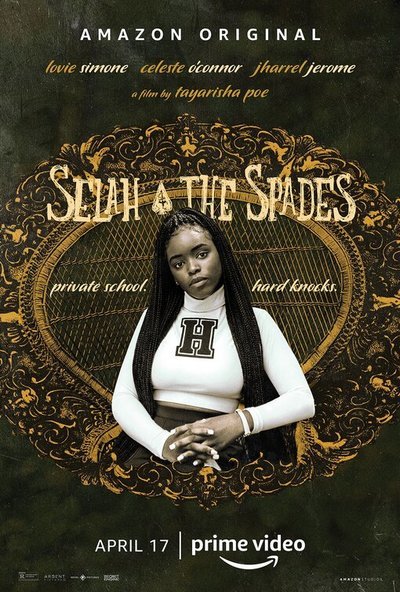