“Luce” is the worst kind of provocateur; it tosses out all manner of outrageous ideas and then, like those pathetic dudes on Twitter, it yells out “DEBATE ME!” As soon as you accept the challenge, the film folds like cheap origami. And this film has a lot to toss at you. It implies that women who say they have been raped are possibly liars with a hidden agenda; it implies that White parents adopting Black children are doing so out of guilt or the desire to be seen as woke; it implies that said Black children may be harboring a dangerous penchant for violence under the façade of being “one of the good ones.” And it does absolutely nothing useful with any of this besides shoehorning these elements into the thriller genre.

Like the abysmal “Crash,” “Luce” is one of those “we need to talk about race movies” where the “we” in question are smugly scolded by the film for falling into the stacked deck-style trap the narrative attempts to set. “You shouldn’t have trusted me!” laughs the film. “You need to check your (fill in the blank: racism, sexism, privilege, Black paranoia, etc.)” Of course, the filmmakers absolve themselves of the crime of being complicit in leading the conversation toward the conclusions they’re tsk-tsking. At best, this is dirty pool. At worst, it intensifies and reinforces the stereotypes it claims to be against.

Since this is a “thriller,” I’m beholden to the rules of spoilers. This is aggravating, because in order for me to tell you why I think “Luce” is lackluster, I’d have to reveal too much information. So here’s what I can tell you. “Luce’ takes place at a high school deeply enamored with a Black student named Luce (Kelvin Harrison Jr.). In addition to looking old enough to be a teacher, Luce is the school’s star pupil, excelling in both sports and academia. He is the proud son of Amy and Peter Edgar (Naomi Watts and Tim Roth, respectively), two White parents who pulled him from a war-torn African country where he was conscripted to be a child soldier. After years of briefly mentioned therapy, Luce has become a productive member of American society. In addition to that splash of “Crash,” we now have a soupçon of “Beasts of No Nation.”

Luce’s former life as an agent of forced violence gets dredged up by his teacher, Harriet Wilson (Octavia Spencer, who also serves as a producer). Wilson is a stern taskmaster who takes no guff in her class. She calls the Edgars in for a parent-teacher conference regarding a paper she assigned the class. The topic required taking a controversial position on a subject. The assignment is just asking for trouble, because a student as good as Luce is going to write one helluva convincing paper. Luce writes about Frantz Fanon, whose ideas about “necessary violence” lead Wilson to think Luce is planning some sort of violent retribution toward the school. This leads to Wilson exercising some obscure school rule that allows her to search Luce’s locker. Inside, she finds fireworks, which she sees as proof of Luce’s intentions. Since Wilson has apparently never seen a crime show before, she gives her evidence to the people who have very good reason to destroy it, and by extension, all her credibility.

Wilson’s bombshell discovery, pardon the pun, causes a rift in the Edgars’ marriage. Regarding Luce, their parental dynamic mirrors the couple in Larry Cohen’s killer infant movie, “It’s Alive”—she refuses to think her kid might be evil even in the face of what may be incontrovertible proof; he is more than willing to take incriminating details at face value. In one of the film’s rare moments of honesty, Peter implies that he would rather have adopted a kid with less baggage and therefore less performative wokeness value. When “Luce” toys with the idea that Amy has a Great White Savior complex, and that it might literally blow up in her face if her ward is a true monster, the film offers the mild bemusement that accompanies schadenfreude. After all, Luce proudly explains that his parents changed his African name because they couldn’t pronounce it. There are centuries of damning history in that action alone.

Unfortunately, “Luce” can’t focus solely on the Edgars’ intentions because it has a truckload of other hot-button issues to dump on the viewer, all of them presented in a half-assed fashion that the film thinks is thought-provoking. It’s nothing but questionable noise, most notably in the guise of Stephanie Kim (Andrea Bang). Stephanie may have been sexually assaulted by jock friends of Luce before he saved her, and Wilson uses her in class as an #MeToo example. Stephanie’s connection to the plot is one of those aforementioned spoilers, but I’ll say it’s as big a problem as a separate subplot whose sole purpose is to brutally humiliate a woman with mental issues for no reason outside of shock value.

Throughout the film, Luce remains a cipher and Harrison’s performance suffers as a result. Luce says he doesn’t want to be a symbol, but that’s all he is here because the film is too gutless to commit to a position. So much is being made about how Nigerian director Julius Onah and his co-screenwriter J.C. Lee are supposedly focusing on the unfair ways Black people are held to unrealistic standards, but this Black person didn’t see enough of that. Luce is so beloved by his school that he’s giving speeches to the entire school on a regular basis! Spencer earns a huge laugh when she responds to Luce’s assertion that he’s never been called the N-word. That’s as ludicrous as the rest of this movie.

Perhaps this material worked better onstage where it originated. “Luce” feels greatly influenced by David Mamet’s controversial play, “Oleanna” which, like all of Mamet’s work, was more effective live. On this very site, Roger Ebert tried to understand why Mamet’s film version didn’t instill in him the same reaction as the play.  I haven’t seen “Luce” in its stage incarnation, but I can easily imagine a clever two-hander between Luce and Harriet Wilson, two Black people with different ideas about how America sees them, and how their birth origins shape their perceptions. There’s a bit of that here, but it’s presented in a late scene between the two that is muddled and confusing rather than illuminating. The constant manipulations make “Luce” profoundly dissatisfying both as a thriller and as social commentary.

According to Rotten Tomatoes, this review is at odds with a consensus of mostly White writers and a few of my fellow voices of color as well. I can live with that. Because if a film is going to toy with the audience, it should at least give them an incentive for having played along, no matter how absurd that reward may be. I mean, I’ll never forget the magic racism-curing staircase of Paul Haggis’ misguided Oscar (and NAACP-award) winning Best Picture. That’s right. “Crash” is more memorable than this. 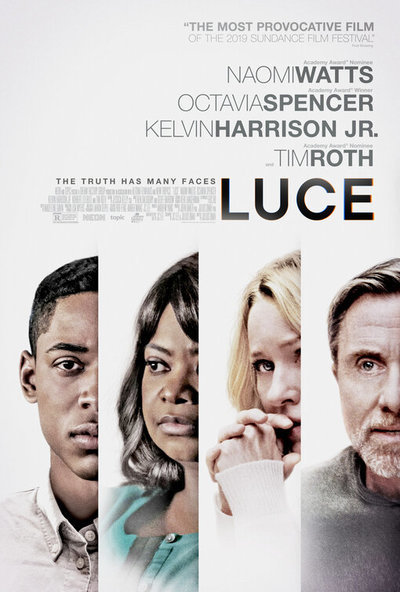 Rated R for language throughout, sexual content, nudity and some drug use.