For transparency’s sake, it feels important to state that this film was screened for limited press in Chicago with extreme precautions that simply won’t be in place for most ticket buyers at least for weeks, including 1% capacity of a huge, sanitized theater first thing in the morning. The intent of this review is not to encourage or discourage anyone from attending a theatrical screening at this specific time. It is an analysis of the work itself for posterity.

No one could possibly mistake “Tenet” as being by anyone but Christopher Nolan. First, it has the kind of budget that only Nolan could get for an original screenplay. There’s so much money in every bursting frame of this opulent film that a scene in which gold bars are literally dumped on a runway feels almost like a self-referential wink. Second, it contains one of those time-twisting narratives that have defined the Nolan brand, one that blends robust action sequences with high-concept stories that viewers have to legitimately strain to follow. Finally, at times, it even seems to echo previous Nolan projects like an album of remastered greatest hits. There are war action scenes that recall “Dunkirk,” an espionage narrative that feels like “Inception,” and even a whole lot of people talking through masks a la Bane in “The Dark Knight Rises.” It is 100% designed as an experience for people who have unpacked films like “The Prestige” and “Memento” late into the night, hoping to give Nolan fans more to chew on than ever before. More certainly seems to be the operating principle of “Tenet,” even if the chewing can get exhausting.

[Note: Spoilers will be incredibly light but if you want to go in completely unvarnished as many Nolan fans do, you’ve been warned.]

“Tenet” wastes no time, dropping viewers into an attack on a symphony performance in Kiev and barely allowing anyone to get oriented. One of the agents sent in to retrieve a high-profile asset during the assault is a man known only as The Protagonist (John David Washington, proving more than capable of carrying a blockbuster film with his charismatic performance). Our hero is captured by the enemy, tortured, and takes a cyanide capsule, as he was ordered to do in training. He survives, and his allegiance to the system and his orders leads to a promotion of sorts, a top-secret assignment that involves a new technology that has the potential to literally rewrite human history.

The Protagonist is taken to a remote facility and introduced to the concept of inverted objects. We look at an object and it is traveling forward through time along with us. That’s obvious from elementary school science class. But what if an object could go in the other direction through history instead? Apparently, objects have been doing exactly this, and the Powers That Be need to control it because if a bullet could be sent back through time, what happens if a nuclear weapon takes the same trip?

Teaming up with a mysterious partner named Neil (a charming Robert Pattinson), our hero tracks inverted objects to a villainous Russian arms dealer named Andrei (Kenneth Branagh). To get closer to this mega-wealthy madman, The Protagonist uses Andrei’s wife Kat (Elizabeth Debicki), who loathes her abusive husband but is being blackmailed into staying with him via threats that she will lose her son if she doesn’t do exactly what he says. On a very basic level, “Tenet” is about the extremes of unmonitored power. When one becomes so rich and powerful that they can literally shape world events, why not try to shape world history too? Sound a little familiar? Andrei is very much cut from the same cloth as classic Bond villains, complete with unchecked opulence, Russian accent and snarling line delivery. Blend Nolan’s obsession with time-twisting high concepts and his love of classic action construction and you have some idea what “Tenet” feels like.

However, there’s never been a Bond movie so stuffed with expository dialogue. “Tenet” spends roughly two hours of its 150-minute run time explaining what is happening, why it is happening, and what might happen next. And yet even with that it’s still incredibly difficult to follow because Nolan goes so far down his own rabbit hole of time travel that one almost needs to take notes to keep up (and I still think it arguably wouldn’t all add up if they could). Scene after scene of Washington, Pattinson, Branagh, and Debicki trying to convey the plot becomes exhausting, and it's Nolan's biggest mistake. It would have been better to just leave more unsaid, and jump chaotically into the film's mood and visuals instead of so often returning to over-analyzing a plot most people still won’t be able to follow. At times, it feels like a film crafted for YouTube explainer video culture. (There’s already one online that purports to deconstruct the ending and the movie isn’t even out in most of the world.) Early in the film, the scientist who explains inversion says, "Don't try to understand, feel it," and I wished Nolan had listened to her more.

For some of his fans, this narrative assault is exactly what they’re looking for, but I prefer emotional registers in my Nolan that he seems only casually interested in here. The stakes don’t feel as high as “Dunkirk,” the maze construction isn’t as thrilling as “Inception,” and even the characters don’t feel as easy to invest in as “Interstellar.” Almost as if he knows his puzzle box is ice cold, Nolan adds the subplot about Kat losing her son, but it’s so underdeveloped that I don’t think her kid even has a line. The kid is as much of a device as an inverted bullet.

If “Tenet” can be a hard movie to engage with emotionally or even comprehend narratively, that doesn't take away from its craftsmanship on a technical level. It’s an impressive film simply to experience, bombarding the viewer with bombastic sound design and gorgeous widescreen cinematography by Hoyte van Hoytema. The movie never sags in terms of technical elements and even performance. Everyone is committed to Nolan's runaway speed. Van Hoytema's work is vibrant, Jennifer Lame's editing is tight, and the performances are all good to great. In particular, Pattinson really shines in a playful register that he's not often allowed to use.

The decision to release “Tenet” in theaters instead of VOD was controversial for many reasons, but there’s no denying that "Tenet" was conceived by Nolan to be an experience that shouldn’t be paused and needs to be projected with a speaker system turned up to 11 (even if that would have still been true if Warner Bros. had delayed the film until it was safer to see it). I almost got the sense that playing "Tenet" at a lower volume or even pausing it at home to take a break might reveal its flaws. Nolan doesn't want you to be able to to dissect it or be distracted by your phone while you watch it. The irony is that he doesn't want you to be able to rewind it. "Tenet" is a movie about momentum, reflected both in its narrative and its aesthetic, and more cracks would show without it.

Viewer response to “Tenet” will come down to how much one engages with that momentum. I expect a surprising number of people will open the door and jump out of this moving race car (look, another palindrome!) before it crosses the finish line, exhausted by a story that doesn’t make sense even as it’s trying to explain itself to you. Others will embrace the filmmaking's energy, which starts with intensity and doesn’t let up much at all. The word I kept thinking of was one I used earlier in this review: “aggressive”—that may sound like high praise to Nolan fans looking for something other than a lazy, predictable blockbuster and harsh criticism to those who aren’t looking to be left weary by a self-serious sci-fi epic. In the spirit of a film about objects moving opposite ways in time in the same space, maybe both groups are right. 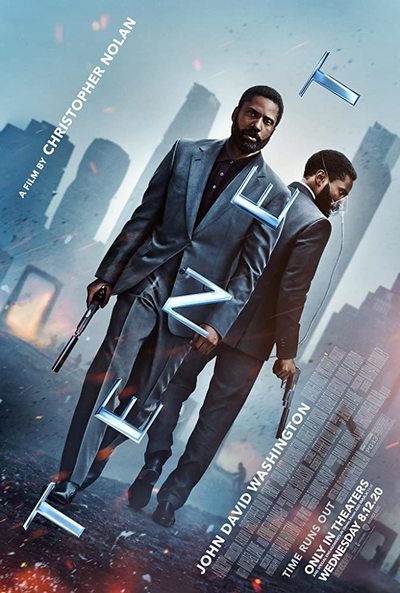 Rated PG-13 for intense sequences of violence and action, some suggestive references and brief strong language.

John David Washington as The Protagonist