“Waves” could also just as accurately be called “Ripples.” It’s about how a series of compounding very bad decisions can ultimately impact good ones. Trey Edward Shults has written and directed an empathetic commentary on the interconnectivity of human nature—a film filled with great, almost unimaginable pain, but also incredible beauty. And it ultimately feels like a call for kindness and forgiveness. Even after the one-two punch of “Krisha” and “It Comes at Night,” “Waves” is unexpectedly ambitious and confident, the work of a filmmaker in complete control of his talents and using them to challenge himself. This is a deeper and more profound film than your average character drama, a masterpiece that’s hard to walk away from without checking your own grievances and grief. The ripple effect continues.

“Waves” opens joyously. Shults’ camera, guided by his regular cinematographer Drew Daniels, glides through the life of a handsome, happy, successful Florida teen named Tyler (Kelvin Harrison Jr.). Tyler’s sister is a sweet girl named Emily (Taylor Russell) and he has a supportive stepmother named Catherine (Renee Elise Goldsberry) and a girlfriend named Alexis (Alexa Demie). Shults captures Tyler’s life with a fluid camera, conveying the constant motion of youth and its boundless joy. He’s a successful athlete in a loving relationship. Sure, he butts head with a stern father named Ronald (Sterling K. Brown), but dad points out that young black men have to work ten times harder than their white counterparts. He seems like a man who a future therapist will call abusive but who honestly believes he’s doing what it takes to make his son successful.

And then Tyler’s world collapses. A shoulder injury could derail his senior year and even college prospects, and Tyler does not have the support structure or skill set to deal with his life’s plan being entirely dismantled. He doesn’t even tell anyone, popping pain pills and slowly coming apart at the seams. And then he finds out Alexis is pregnant. Already in a devastated place emotionally, he fractures further, and “Waves” hurtles toward tragedy, before picking itself up and becoming another film altogether. Not unlike a novel that switches protagonist after the first half, we realize that this has never been only Tyler’s story.

As he did with “It Comes at Night,” Shults plays with aspect ratio, tightening the widescreen ratio on Tyler as the world starts to collapse on him, but this is no look-at-me-ma trick. It’s one of many filmmaking choices that impact how “Waves” gets under your skin, sometimes without you even knowing it, along with the color palette changes and the effective use of a tension-raising score by Atticus Ross & Trent Reznor. “Waves” is a patient, long film, but Shults pays off that patience with the final half-hour, which contains the kind of emotional moments that would feel manipulative and melodramatic in a lesser work but resonate here because of how much we know about these characters.

This kind of dense, complex storytelling requires a lot of trust in performers and Shults’ cast repays that trust with some of the best ensemble work of the year. For lack of a better word, Harrison gets the “flashy” performance, but he’s not the only stand-out here, in fact it’s Taylor Russell who feels like the revelation. Few young actresses have been able to convey so much emotion with a worried look or warm embrace. She only has a few scenes before she’s asked to carry some heavy emotional weight, but she carries it gracefully and movingly. And Brown has a couple scenes that reveal the depth of character he’s found here as well. Like a lot of great dramas, you can see the backstory work done by the actors. Brown isn’t just showing up and delivering lines, he’s playing a fully-realized, complete character. And so when these people are pushed into emotional situations, we feel their pain because of the detailed background they imbued into their characters.

“Waves” is visually daring in ways that will make it perfect for year-end montages about the best films of 2019, but what stuns me most is how much Shults, even at just 30, has found a way to balance the lyrical and the human. Some will compare it to Barry Jenkins’ work—and the Florida setting adds to that—but Shults has his own voice. It’s one that carefully considers all technical decisions – the sound design here is fantastic too—but then grounds it all in character. He finds a way to marry his technical playfulness to the performances he pulls from his award-worthy cast.

When we’re 18, we think we’re invincible, especially in the case of star athletes—Tyler literally shouts “I cannot be taken down” with his teammates before a wrestling match. Yes, Tyler, you can. And not everyone has the emotional strength to handle when life takes them down, or to cope when they make horrible mistakes, and Shults’ film is careful to reveal how that can happen at any age, whether it’s Tyler’s life-changing decisions or the well-meaning but deeply damaging pressure from his father, which is also a mistake. We all make them. But even those mistakes can lead to grace, forgiveness, and beauty. They can lead to a recognition that the wave that crashes on the beach will soon recede back to the peace of the ocean.

This review was filed from the Toronto International Film Festival on September 6th. 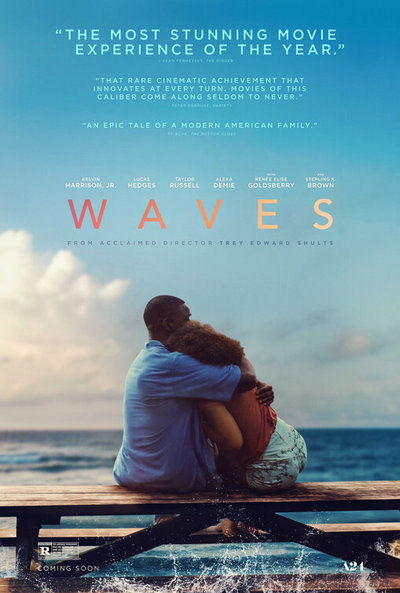