You couldn’t walk into a bar around the turn of the millennium without hearing a song from Moby’s multiplatinum-selling album Play. Whether it was the transfixing repetition of “Honey” or the wistful piano of “Porcelain,” Moby was seemingly everywhere, bringing his brand of dance music to an international audience and becoming a superstar in the process.

And yet, at the height of his fame and success, he was at his most depressed and self-destructive. This paradox isn’t exactly unusual in celebrities in general and artists in particular, an often needy and emotionally damaged lot. But what is novel is the way the documentary “Moby Doc” explores both his childhood trauma and his adult torture. With its surrealist tones, striking visuals, and self-referential asides, director Rob Gordon Bralver establishes a delicate balance between the playful and the tragic that’s constantly alive and surprising.

It’s also a departure from the vast majority of music documentaries we’ve seen over the past decade or so: behind-the-scenes looks at artists including Billie Eilish, J. Balvin, Taylor Swift, Lady Gaga, Katy Perry, and Justin Bieber. (The recent P!nk documentary is so singularly celebratory, it especially feels like an infomercial.) These are films that promise intimate portraits of performers we love and perhaps think we even “know,” thanks to the social media connections they methodically cultivate with their fans. But while such movies can be entertaining and even eye-opening, they’re not exactly warts-and-all depictions. There's still a brand to protect, a record label to serve as ultimate gatekeeper. There’s a structure to them that becomes formulaic, even predictable: the grind of the tour, the wacky backstage antics, and maybe a physical ailment or personal setback that provides an obstacle on the way to The Big Concert at the end.

“Moby Doc,” which Moby (real name Richard Melville Hall) co-wrote with Bralver, takes all those familiar storytelling notions, tears them to shreds, and tosses them out the window. Sure, Moby takes us back to the beginning, which helps us understand both his love of music and his animal rights work, the two driving forces of his life. But he does it with bracing candor, almost a cathartic drive to expose his demons. He also does it with fuzzy finger puppets, Sharpie cartoons, and intentionally simplistic dioramas adorned with colorful stickers. Despite its frequently dark content, “Moby Doc” often carries the sweetly childlike vibe of a Michel Gondry movie in the eclectic and knowingly rough-hewn way it approaches emotionally complicated subject matter. Early on, Moby gathers a few friends to act out some of the more harrowing moments of his youth—a troupe he dubs “The Childhood Trauma Re-Enactment Players”—with Moby himself wearing a beret, holding a riding crop and offering directions such as: “A little more ... sadness.”

An only child growing up in Harlem in the late 1960s, Moby endured anger and neglect from an early age. He recalls screaming matches between his parents, leading to his alcoholic father’s fatal drunk-driving crash. His mother, a widow at 23, moved the two of them to the affluent enclave of Darien, Connecticut, where he was ashamed of his poverty. Within this early instability, Moby says in one of the movie’s many staged therapy sessions, “Music saved me.” (One of the amusing details during these scenes is a reaction shot of the therapist, played by singer-songwriter Julie Mintz, stifling a yawn as he drones on about his success.) A wealth of archival footage reveals the musician’s many looks and styles over the years—when he had hair but didn’t have glasses, when he played punk rock but was gravitating toward EDM. Given the film’s surreal tone, it only makes sense that David Lynch shows up to talk about his longtime friendship with Moby, which dates to the musician’s remix of Angelo Badalamenti’s Laura Palmer theme from “Twin Peaks” for his first huge hit, “Go.” Lynch also offers this vivid bit of wisdom in explaining Moby’s desire to dig deep and understand himself: “Negativity begins to lift away. Hate, anger, fear, all these things start to lift. The suffocating rubber clown suit of negativity dissolving and pure gold coming in from within.”

“Moby Doc” is filled with such intriguing detours. A more traditional music documentary would have provided a bit more background on the process of putting together Play, with its many samples of Southern blues giving his songs their infectious hooks. That would have been instructive, too, in further understanding this artist. “Moby Doc” also fails to mention that much of the reason the music from Play was so ubiquitous two decades ago was because he licensed it for use in commercials, which helped fuel the album’s stratospheric sales. And nowhere will you hear the name Natalie Portman, in case you were wondering about the claim he makes in his memoir that he dated the actress, which she disputes. (He has since apologized.)

But Moby does go in-depth on his addiction issues, or what he calls his rock ‘n’ roll cliches: drinking, drugs, dating strippers. Worldwide fame was “amazing but terrible at the same time” and it gave him an excuse to indulge his worst narcissistic instincts. He missed his mother’s funeral because he was passed out drunk. He contemplated suicide in a luxury high-rise hotel where he shared an exclusive floor with the likes of Madonna. It was literally rarefied air, and it left him feeling empty and lonely. His honesty in exploring the darkest times of his life will surely be helpful even to those of us who haven’t enjoyed astronomical acclaim. Getting sober in 2008 allowed him to make veganism and animal rights activism his primary passion.

“Moby Doc” does indeed end at The Big Concert, but it takes an unexpected and inspired path to get there. There’s also a ton of music threaded throughout, including an intimate, acoustic guitar version of “Porcelain” and a massive, joyous performance of “Natural Blues” featuring a full orchestra and gospel choir. Despite the fact that you’ve heard these songs countless times in a variety of settings, these inspired incarnations will make you feel like you’re experiencing them for the first time, just as “Moby Doc” as a whole breathes thrilling new life into a safe and conventional genre. 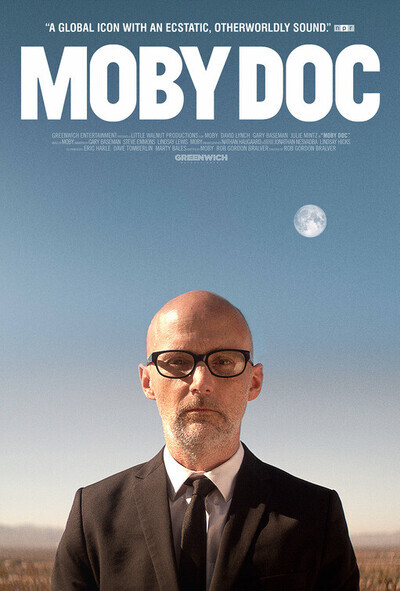 David Lynch as Self

David Bowie as Self

Shepard Fairey as Self

Gary Baseman as Self