Bring tissues. Because whether you’re the faithful target audience for “Miracles From Heaven,” a non-believer or someone in the mass agnostic middle ground, you may find it hard to hold back the tears during various points in this real-life tale. And they’ll be earned.

This could be the first faith-based film to truly cross over and find both critical acclaim and a mainstream audience beyond just the church-going crowd. And there have been a lot of them lately which have opened with varying degrees of success, from cheesy bombs like “Kirk Cameron’s Saving Christmas” and the Nicolas Cage version of “Left Behind” to films that have been box-office hits (if not critical ones) like “God’s Not Dead” and “Heaven Is for Real.”

“Miracles From Heaven” shares the same producers as that last film, as well as some of the same redemptive, inspirational ideas and the real-life hook. It’s based on the 2015 memoir of the same name by Christy Beam, whose daughter, Anna, suddenly suffered from a rare intestinal disorder—and then, just as suddenly, was cured in the craziest of ways.

Much of what makes the film work is its emotionally demanding performance from the ever-accessible Jennifer Garner. She gets a big arc to work within, revealing warmth and vulnerability, grit and determination as Christy. She asks all the existential questions any of us would in the midst of such a faith-testing trauma.

Faith is, of course, the crucial component here: the mystery of it, the need for it and—ultimately—the validation of it. From the title alone, it’s clear that faith will win out in the end. But the journey there takes some turns that feel (mostly) honest and true, which should make the movie universally relatable despite the unique and specific troubles the Beam family faced.

The trailer pretty much tells the whole story, so there will be no spoilers here. But because we know what will happen at the outset, the challenge for director Patricia Riggen is finding a source of tension to keep us emotionally engaged. (Riggen tackled a similar prospect with last year’s “The 33,” based on the true story of the Chilean miners who survived 69 days while trapped underground.) Her approach, which is non-fussy and intimate, relies on the power of the human drama and its significant stakes.

At the film’s start, 10-year-old Anna (Kylie Rogers, showing not the slightest trace of child-actor precociousness) is the middle child of three daughters in a loving and devoutly Christian home in Burleson, Texas, just south of Fort Worth. She’s a smart, confident kid with a passion for books and a yearning to visit Paris. But out of nowhere one night, she’s violently vomiting, which leads to massive stomach pain, which leads to various doctors telling Christy and her veterinarian husband, Kevin (Martin Henderson), that it’s lactose intolerance or acid reflux or something else that’s minor and treatable.

But the pain doesn’t go away. In fact, it gets worse. So Christy’s fierce maternal instinct inspires her to fly with Anna to Boston in hopes of seeing top pediatric gastroenterologist Dr. Samuel Nurko (Eugenio Derbez), whom she’s been calling for months to schedule an appointment. When he eventually agrees to see them, he confirms what a local doctor (Bruce Altman, very good in a small role) initially diagnosed: Anna is suffering from a severe and incurable intestinal motility disorder which makes eating impossible.

From there, it’s a non-stop back-and-forth between Texas and Boston, with some painful moments involving feeding tubes as well as heavenly imagery of sunlight piercing fluffy, white clouds or the water where majestic creatures swim at the New England Aquarium. (The film’s cinematographer, Checco Varese, is Riggen’s husband.) “Miracles From Heaven” wisely and efficiently depicts the toll Anna’s illness is taking on this once-idyllic home, with Kevin struggling to make ends meet and generally holding down the fort while Christy and Anna are away every six weeks.

Back in Boston, an unlikely friendship the mother and daughter strike up with a big-hearted waitress (Queen Latifah) would seem like a facile method of injecting comic relief—except it really happened. But this bond, and several other acts of kindness that are revealed along the way, play neatly into the film’s central notion that miracles are everywhere, in the smallest, kindest gestures, which isn’t exactly the worst message a movie can convey.

One of the most poignant scenes is also one of the most understated as Anna and the young girl in the hospital bed next to her (Hannah Alligood), who’s battling cancer, discuss whether they’re afraid of dying. The directness on display in Randy Brown's script, and in later scenes when Anna suffers from depression and Christy acknowledges that her faith is so shattered that she can’t even pray anymore, represents a welcome balance of emotion and tone.

Ultimately, though, the film is about the possibility of miracles. The biggest and most bizarre of them all occurs back home when Anna has given up hope and reluctantly agrees to climb that big ol’ cottonwood tree in the family’s front yard with her older sister, Abbie (Brighton Sharbino), one last time. The branch they’re sitting on gives way and she dives into the tree's hollow trunk for safety, only to plummet 30 feet to the ground and land on her head. Again, this is all in the trailer—and in the book—but in a seemingly implausible twist, not only does Anna survive the drop without a scratch, she’s cured of her intestinal disease.

She also emerges from the debacle with a vivid story about leaving her body and going to heaven, a place so vibrantly, colorfully pastoral you’ll swear you’ve seen it in countless commercials for allergy medication. (Visual effects are not the film’s strong suit.) There, God has told her she’ll be fine, and she should go home to her family. Impossible? Maybe. But the film suggests that you can interpret this magical moment in any way you like, depending on your beliefs and needs—and that’s sort of miraculous in itself. 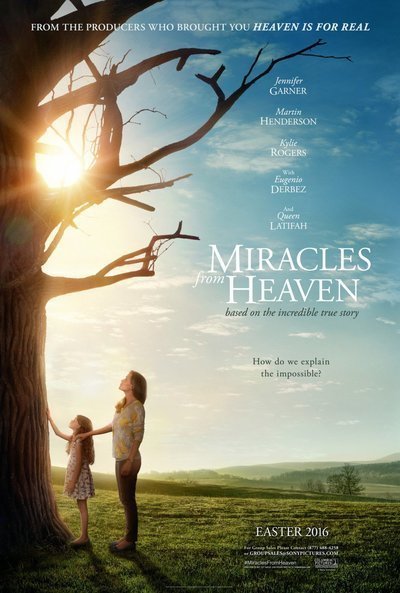 Rated PG for thematic material, including accident and medical images.