Yes, Cage’s howl-inducing remake of ‘The Wicker Man” from 2006 actually feels like a legitimately good time compared to this dull groaner about the end times. It’s a remake too: a version of “Left Behind” starring Kirk Cameron quickly came and went from theaters in 2001, followed by a couple of straight-to-DVD sequels. All are based on the apocalyptic novels by Jerry B. Jenkins and Tim LaHaye.

Christian readers and audiences are the base here, but it’s hard to imagine that this incarnation of the story will persuade anyone else to find the Lord unless they’re sitting in the theater praying for the dialogue or special effects to improve. This is essentially an “Airport” movie with an Evangelical spin, but it lacks the self-awareness to turn such a wild concept into a guilty pleasure.

Director Vic Armstrong, a longtime stuntman making only his second feature (and his first in a couple of decades), had a larger budget than the original's, and a more established star in the lead. None of that shows up on screen. The "big" set pieces look small and chintzy, the lighting is hard and flat, and the pacing is a monotonous back-and-forth between an airplane in the skies across the Atlantic and the chaos on the ground below.

But the more serious disappointment comes from Cage’s performance. As the awesomely named Rayford Steele, a philandering airline pilot who sees the light as the end is nigh, Cage needed to bring the wild-eyed, full-bore crazy. This has been his bread and butter of late, and it’s been a thoroughly enjoyable career shift. Instead, he’s oddly inert as the movie's voice of reason. Looking distractingly rubbery with a helmet of fake, dark hair, he seems to have been Photoshopped into the film. His presence is so strangely awkward and unconvincing.

Then again, the script from Paul Lalonde (who also produced the original “Left Behind” movies) and John Patus doesn’t exactly give him or the rest of the cast much to work with. It’s full of flat character types and blandly expository dialogue. At the film’s start, Rayford’s daughter, Chloe (the perky Cassi Thomson), has come home from college for the weekend for her dad’s birthday. But Rayford got a last-minute assignment to fly from New York to London overnight, which will keep him away all that time. At least that’s what he told his wife Irene (Lea Thompson), who’s no fun anymore now that she’s found Jesus and is urging everyone around her to do the same. (The camera lingers as Irene tosses her gardening gloves on top of her ever-present Bible.) His real plan is to seduce a hot, blonde flight attendant (Nicky Whelan) over the weekend, beginning with prime tickets to see U2.

This is actually a vaguely intriguing premise: What happens to a marriage when one spouse undergoes a religious conversion and the other does not? It seems similar to what happens when one spouse gets sober and the other keeps drinking. What sort of wedge does this create? How does the family survive? But these aren’t the questions “Left Behind” cares to ponder. Armageddon is on the horizon.

Anyway, Chloe and her dad have a brief, stilted conversation in the airport waiting area between her arrival and his departure. Being the skeptic that she is, she also has a confrontation about religion with a woman who’s just bought a book about God at the bookstore. Chloe also finds time for a long chat with hunky, hotshot TV news correspondent Buck Williams, who happens to be a passenger on Rayford’s flight to London. (Chad Michael Murray takes over the role Cameron played in the original. I’d say that’s an improvement.) There's a lot of sitting around and talking in “Left Behind.”

But then! Out of nowhere, God starts calling the pure of heart to heaven: children, mostly, but also people who have the words BIBLE STUDY written in their calendars in big capital letters. At first, no one realizes this is God’s doing. People just disappear, leaving their clothes and belongings in a pile where they once stood, including Chloe’s little brother and (of course) her mom.

Pandemonium ensues as millions go missing worldwide–or at least, implied pandemonium. This includes a school bus driving off an overpass and a small plane crashing into a shopping mall parking lot. There is zero finesse to these supposedly dramatic images. Mostly, Armstrong gives us a lot of people running around, flailing their hands in the air.

Meanwhile, up in the sky, folks start disappearing, too–including a flight attendant and Rayford’s second-in-command. (Guess this means God really is his co-pilot.) The barely sketched-out passengers in first class start panicking and bickering, including a Texas businessman, an Asian conspiracy theorist and a drugged-up heiress. Former “American Idol” winner Jordin Sparks fares poorly as a paranoid, unstable mom who somehow smuggled a handgun on the plane. Worst of all is the consistent yammering between a kindly Muslim and a surly little person. The movie cuts to them repeatedly for comic relief, but it’s painfully unfunny every time.

“Left Behind” finally edges toward an enjoyable level of insanity as it reaches its conclusion. I wouldn’t dream of giving away the details–mysterious ways, and all–but I will say that it involves the petite Chloe driving a steamroller in the dead of night on a deserted stretch of highway that’s under construction.

Still, for a movie that spells everything out, it’s unclear why God chose this particular moment to inflict his wrath upon the masses. Was it because Rayford tried to forsake his wedding vows with a flirty flight attendant at a U2 show? Still, if you’re a true believer, it’s a beautiful day. 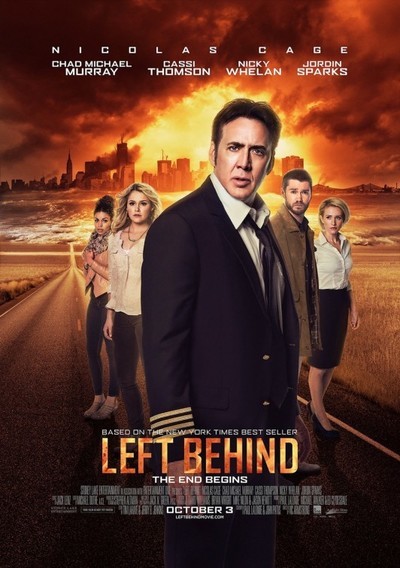