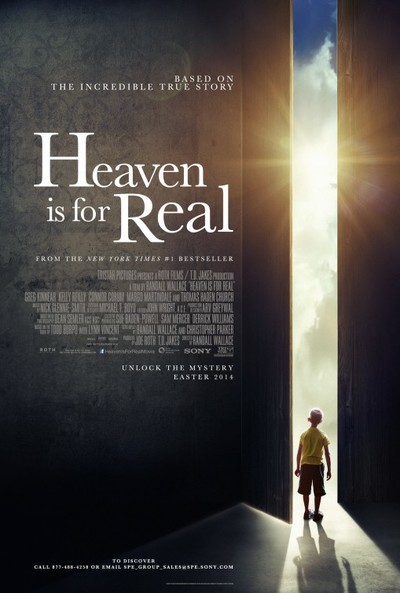 Rated PG for thematic material including some medical situations

I am conflicted about "Heaven is for Real," which proves this is a better movie than you might expect. It has some good performances, a sense of humor and an adorable little boy as its lead. It has actors you’ll recognize, like Oscar nominees Greg Kinnear and Thomas Haden Church. The always-welcome Margo Martindale has a key supporting role too. Outside of some mild gore, it has nothing that might jolt or offend kids or sensitive viewers.

But "Heaven is for Real" also has an agenda, which is handily spelled out in its declarative sentence of a title. It is the latest, and thus far best, of the current flood of faith-based films. Hollywood is finally warming up to a market Tyler Perry has been servicing for a decade. Contrary to popular belief, Perry’s films are attended by churchgoers of every skin color. The Polish church on my block sends me cards (I guess Jesus gave them my address) inviting me to group screenings of the latest Madea movie AND "Son of God."

Based on a bestselling book by Todd Burpo and Lynn Vincent, "Heaven is for Real" tells the story of how Burpo’s 4-year old son, Colton (Connor Corum) visited Heaven and lived to tell of its pleasures. Colton didn’t actually die; he was just under some really good anesthesia during an appendectomy. Colton returns home armed with knowledge he had never been privy to before. He knows things about his family that nobody has told him. When pressed by Todd (Greg Kinnear), Colton insists that Jesus informed him on these matters.

I have no problem believing the plot line of this movie; if I can believe Captain America is darting across the sky with the star of "She Hate Me," I can believe a little boy went to Heaven and met the Lord. In fact, as someone who has died twice and didn’t get 1/1000th as good an out-of-body experience this kid got, I was intrigued by "Heaven is for Real."

But, without fail, every time I found myself liking this movie, it would break the spell with its ulterior motives. To make its points, it relies on the kind of cheap, reassuring notes of one of those psychics who purports to talk to dead people. Everybody the Burpos cared about is in Heaven, and they’re all young, except in the case of the one particular unborn character who skews much older. That character pushes "Heaven is for Real" to the depths of manipulation from which it never recovers.

Unlike the recent "God’s Not Dead," which is the "Beaches" of faith-based films in that it embodies every single complaint against its genre, "Heaven is for Real" attempts to cast a wider audience net. At times, you can feel director and co-screenwriter Randall Wallace ("Braveheart") reaching beyond the low-hanging fruit of his Christian audience. He devotes credible moments of doubt to the film’s characters, asking some of the same questions a non-believer in the audience might.

There’s a nice give-and-take between church pastor Todd and his wife Sonja (Kelly Reilly) in regards to whether Colton’s story is really the miracle it appears to be. Kinnear is very good at being consumed by his son’s story and what it spiritually means. Reilly matches him, and has a fine scene where she demands her husband focus on life instead of the afterlife. In scenes like this, the characters feel real and identifiable.

The problem is that "Heaven is for Real" cannot leave well-enough alone. It has to show its hand at all times. It destroys the beautiful mystery of Colton’s experience and uses improper methods to shame the unconverted. Preaching to the choir is just fine by me, as I was once a member of that choir. But doing victory laps, sticking your tongue out at non-members and hi-fiving the choir while chanting "Amirite, amirite?" does not help the cause.

For example: In distress, Todd visits a therapist who is not a Christian. Their conversation starts off interesting, with Todd citing that perhaps her non-belief will help him put things in perspective. When she offers a scientific explanation that the brain induces hallucinogenic chemicals when a person is near death, Todd gives her a kiss-off line about not having faith. Later, we see this same shrink at Todd’s church. Why is she there? Did one accusatory line turn her into Shirley Caesar?

Another example: Colton tells us about his Heaven, and it’s vivid enough from his words. But Wallace also has to show it to us, which can only lead to disappointment because it’s incredibly cheesy and stereotypical. There are angels (who don’t dance on the head of a pin because this is Protestant Heaven), a population that proves I never had a shot at getting past the Pearly Gates, and of course, Jesus. While I rolled my eyes at Heaven’s depiction, I loved how, for a time, Wallace keeps Jesus’ face off camera. He has an aura of mystery and a calming voice, but never faces us; we can project our own expectations as to appearance.

Unfortunately, "Heaven is for Real" just HAS to show us Jesus’ face and, unlike the hippie in those paintings your grandma had on her wall (or in the case of my grandma, the picture that looked suspiciously like Nick Ashford from Ashford & Simpson), Jesus bears an uncanny resemblance to Kenny Loggins. "This is it," I said to myself. Thankfully, the movie was over.

Kinnear makes a fine preacher and a good comic foil. I liked him, and I liked his last sermon in which he reflects on how people measure miracles with yardsticks when they should be looking for them in much smaller measurements. The widescreen cinematography by veteran Dean Semler is gorgeous to look at (it’s mostly outside, so the art direction is by God) and Wallace directs the tight, quiet moments with such grace that I resented when he constantly went loud and broad.

I really wanted to like this movie, but it kept poking me in the eye every time I got close to it. My two star, middle of the road rating seems appropriate for a preacher’s kid who left the flock 20 years ago, destined never to return. Add two stars to my rating if you’re a true believer who goes to church every Sunday. Now subtract half a star from that, because you know God’ll strike you for lying about going every Sunday.