"Men, Women and Children" is a film that wants to make a grand and profound statement about where we are as a society today; how modern technology has affected human relationships by showing how the very tools theoretically designed to bring people together have instead driven them further into their own individual online worlds filled with hardcore pornography, violent video games, potentially dangerous chat-mates and whatever that Tumblr thing is. A potentially interesting premise is handled so badly that what might have been a provocative drama quickly and irrevocably devolves into the technological equivalent of the old anti-dope chestnut "Reefer Madness," squandering the efforts of a strong and talented cast struggling mightily to make something of the ridiculously trite material.

Based on the novel by Chad Kulgen, Reitman's adaptation is set in a small Texas town, and follows a group of high school students and their parents whose lives have been overrun with high-tech gadgets and all the troubles they can inspire. Donny (Adam Sandler) is an ordinary guy whose dissatisfaction with his marriage leads him first to straightforward internet pornography and later to an escort service for a fling; little does he suspect that wife Helen (Rosemarie DeWitt) is following a similar mental trajectory. Their son, Chris (Travis Trope), has become so versed in pornography that direct human contact with a girl is no longer enough to excite him—a condition that reaches a head, so to speak, when sexpot cheerleader Hannah (Olivia Crocicchia) makes a play for him. Hannah, by the way, is an aspiring starlet who has a website filled with provocative photos for her "fans," and if you are curious as to where her mother is, it turns out than Mom (Judy Greer) runs the site and takes the photos in the hopes of giving her daughter the Hollywood career that was denied her years earlier.

Mom, by the way, is beginning to see Kent (Dean Norris), who is still reeling from his wife's recent abandonment of him and his son, school football star Tim (Ansel Elgort). As a result of his mother's absence, Tim has developed an existential funk that leads him to quit the team and start spending his time playing video games and pursuing the school's requisite quirky outsider girl—you can tell because she reads actual books—Brandy (Kaitlyn Dever). Brandy, alas, is living under the yoke of her wildly overprotective mother, Patricia (Jennifer Garner), who not only monitors her every online move right down to the number of keystrokes but leads a neighborhood discussion group dedicated to warning about the hidden dangers of being online. ("I want to give you a pamphlet about the dangers of selfies.")

Finally, there is Allison (Elena Kampouris), a young girl whose desire to be thin has driven her to an eating disorder and a website where other anorexics offer inspiration as she starves herself. All of this activity is being monitored by an unseen narrator (Emma Thompson), who muses about the frivolity of our behavior while Voyager hurtles through space with its records showing mankind at his best.

In theory, "Men, Women and Children" sounds like it has all the makings of a promising drama about contemporary mores in our social media-saturated culture, but, in practice, it fumbles the ball in virtually every department. All of the various interconnecting stories are shallowly conceived morality plays in which the characters are forced to march their way towards potentially tragic denouements that can be seen coming a mile away and all appear to have been taken directly from a guidebook highlighting the perils of the Internet penned in 1999. At one point, Patricia is mocked for relating an urban legend about the perils of extended online usage, but the film more often than not seems to be sharing her hysterical perspective on the subject.

Nearly all the characters are unlikable, which is not necessarily a problem, and uninteresting, which is. Therefore, it becomes difficult to care about what happens to the vast majority of them. There is also a smugness to the proceedings that is difficult to get behind, especially in Thompson's incredibly arch and largely unnecessary narration. And in a desperate attempt to generate some kind of sympathy from viewers without actually earning it, the screenplay even shoehorns in such things as 9/11 and Carl Sagan's "Pale Blue Dot" to try to move people.

While the characters on the screen desperately fumble for the answers to their technological anomie, people in the audience will instead be desperately fumbling for the answer to the question of what is going on with the career of co-writer/director Jason Reitman. Over the course of his first four films—"Thank You for Smoking," "Juno," "Up in the Air" and "Young Adult," quite possibly one of the best American films of recent years that you have not yet seen—Reitman proved himself to be both an acerbic social satirist of the highest order and an unusually empathic storyteller. He did stumble last year with "Labor Day," the mawkish melodrama that saw him abandoning the altar of Billy Wilder to attempt to make a modern-day version of a Douglas Sirk weepie, but even though that one didn't work, it was more boring that awful (save for its instant camp classic pie-making sequence) and could be written off as a noble but dumb attempt by Reitman to expand his artistic palette.

Although "Men, Women and Children" would seem to offer opportunities for slashing satire, Reitman and co-writer Erin Cressida Wilson appear to have taking several pages from the Stanley Kramer playbook, delivering a film that all but flashes signs warning viewers of impending moral messages. For example, there is a scene in which the starlet's mom gets bad news regarding her daughter's website while shopping at the butcher's area of the grocery store—just to make sure everyone gets the point, the scene ends on a giant sign that reads "MEAT."

What is really frustrating about "Men, Women and Children" is that there are actually some good performances here from actors trying to bring this gibberish to life. On the grown-up side of things, Adam Sandler is effective in a straight dramatic part and once again suggests that he has the makings of a fine dramatic actor when he stops making glorified home movies with his buddies and genuinely applies himself. As the key young couple, Kaitlyn Dever, who was so good in "Short Term 12," and Ansel Elgort make the most of what they have been given to work with here, and Elena Kampouris is also affecting at times as the anorexic.

It is just too bad that the same thing that has happened to so many young people traveling the information superhighway over the years has happened to these young actors—they put their trust and faith in someone who seemed to have their best intentions at heart, did some embarrassing things in front of cameras (though not as embarrassing as the things done behind them), and now they will have to live with the results of their decisions for the rest of their lives, no matter how many times they try to scrub their IMDB filmographies. 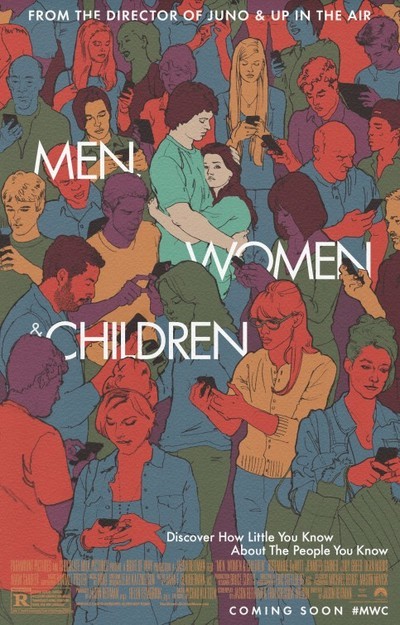