"Memphis" is a gorgeous, gorgeous movie—the kind that prompts critics to say "every frame could be a painting"—but it is also proof that the woozy, opaque mode of American independent filmmaking has its limits.

Written and directed by Tim Sutton, whose debut feature "Pavilion" was similarly cool and observant and unconcerned with plot, it's a quasi-documentary drama about the creative struggles of Memphis blues musician and poet Willis Earl Beal, who's playing a version of himself here. The character's depression, aimlessness and recessiveness keep the audience at arm's length throughout, never offering much in the way of compensatory insight.

Beal is a superficially compelling character, in his passive and medicated way. He seems to be blocked. His label wants him to finish his new album but he seems to have fallen down a sort of tinkering spiral, endlessly reworking his work. Is he a perfectionist, or is he procrastinating? When his bandmates press him for more specific directions and grow irritated by his vagueness, are we seeing a misunderstood genius struggle to make himself understood by lesser talents, or a man whose gifts don't really match his mystique?

There's not enough information to answer any of those questions. After a certain point it seems that we're supposed to file them under Life's Great Mysteries, alongside the movie's many haunting ephemeral moments: a kid on a bike shifting back and forth before he rides down the street; dim lamplight casting shadows on dim apartment walls; the sun peeking down through the canopies of old Memphis oak trees, seen in Terrence Malick-style, upward-gazing dolly shots.

As a people-watching and city-watching experience, the movie has its virtues. Sutton, cinematographer Chris Dapkins and editor Seth Bomse have an eye for poetic images and moments. But after a while you might worry that the filmmakers are luxuriating in the stoner poet stylings of certain movies by Malick and Gus van Sant ("Last Days") and early David Gordon Green ("George Washington" especially) for the same reason that their hero keeps noodling and revising instead of forging ahead: because he's not entirely sure what he wants to say. There's nothing in this assured yet strangely fuzzy feature to allay those worries.

You watch Beale stroll, sit, shoot the breeze with friends and fans and colleagues (including Stax label veterans Larry Dodson and John Gary Williams), banter comfortably with his significant other, Lopaka (Lopaka Thomas), and go out into the swamp and talk and sing to the trees. You watch him do interviews about his art, and dance around why he might be having trouble accessing the source of his creativity, and deny Lopaka's assertion that he invited her over to his place because he needs her. You watch other characters, most of them nameless and shorn of individualizing details, in tight closeup, as if seen through the viewfinder of a foreign tourist checking focus before snapping pictures that he'll upload to his "Memphis trip" folder on Facebook. Train horns moan. Insects whir. You watch and watch, and listen, waiting for the moment when all will coalesce and give you some sense of why you've been watching and listening. The momentary splendors remain momentary.

"I consider myself a wizard," Willis tells an interviewer early on, but allows that "the magic doesn't fulfill everything that you want it to fulfill," then ends his statement with, "It's all artifice." Arriving, as it does, in the movie's first few minutes, this statement plays like a foreshadowing of revelations to come, but in time it starts to seem like an excuse for inertia. "Pavilion" was slow and quiet and rather opaque as well, but there, at least, the lyrical tendencies were strung along the clothesline of a tough-tender coming-of-age tale.

The film that "Memphis" most reminds me of is Bruce Weber's "Let's Get Lost," a meandering, ostentatiously gorgeous black-and-white doc about Chet Baker that often got, well, lost in its own reveries, to the point of staring endlessly at old Chet's craggy visage or watching him drive around in convertibles and bumper cars with young women as if participating in a fashion shoot for Interview Magazine. "Let's Get Lost" is a nearly great film, though, despite its indulgences, because it's about a real man with a real history that's repeatedly, empathetically explored by real witnesses: ex-wives, colleagues, children. Even when Chet Baker withdraws from us like a whipped dog or spins webs of self-serving fiction, the movie and the many other voices contained in the movie assure you that there is, in fact, some kind of There there.

That's not the case with "Memphis." When a man in a church that Willis attends tells the congregation, "I'm in a spiritual war within myself," and his fellow parishioners murmur "Amens," you may smile ruefully, because it's more than the hero ever gives us, and because this nameless man who has less than a minute of screen time is livelier than the man that the director put at the center of his second feature. This is kind of movie you'd watch for a while if it were projected on the back wall of a bar without asking the bartender to turn the sound up. 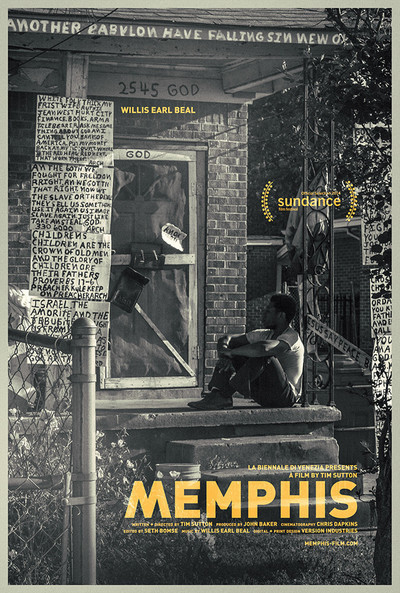