A movie about color, movement and little else

Hazy, teenager-centric community portraits have become something of an indie sub-genre in recent years; Chris Fuller's "Loren Cass" (2006) and Matthew Porterfield's "Putty Hill" (2010) both come to mind as prominent examples. These films are typically anti-dramatic, populated by unaffected non-professional actors, and set in the least scenic parts of rural and suburban America. They display a strong sense of form and structure (especially true of "Putty Hill"), yet almost never come across as self-consciously arty. Their tone is unsensantional, unsentimental, and nonjudgemental. More often than not, they lack a central protagonist.

Tim Sutton's debut feature "Pavilion" is arguably the most abstract film to emerge from this trend. It has no interest in the adult world and no political edge. It does not grapple with a larger theme. It articulates no big idea. In essence, the movie is a mood piece about teenage bodies in motion: riding BMX bikes, skateboarding, swimming, ambling through woods, pushing shopping carts and laundry trolleys. It's about color and light, drift-like movement, a sense of isolation — and little else. If you're already on the movie's wavelength, it can be entrancing. If not, "Pavilion" may come off as flat and aimless.

"Pavilion" has only a thin sliver of plot — something about a 15-year old boy (Max Schaffner) who moves away from his mother's house in upstate New York to live with his father in Arizona. This premise has the makings of a realist drama, but writer/director Tim Sutton deliberately avoids anything resembling dramatic tension or characterization. The non-professionals in the cast function not as characters but as bodies within the frame; the set-up is a change of scenery — from the verdant Northeast to the arid Southwest — and not much more.

The movie opens with three boys setting off fireworks in a clearing. The scene is composed in wobbly pans; the depth-of-field is so shallow that only the brims of the boys' caps are in focus. After about a minute, the movie cuts to a girl playing with a sparkler; she appears to be alone. The sparkler illuminates her face in the indigo-colored dark.

This opening sequence is both a statement of purpose and a litmus test. Sutton's images are evocative but largely devoid of context or subtext; his use of extremely shallow focus is almost a metaphor for the film itself, which hones in on small details while leaving everything else blurry.

The movie doesn't offer much insight beyond the notion that teenagers exist in a world apart from adults — a notion that's hardly new. Taken as a whole, "Pavilion" resembles a themed photospread; every scene articulates a variation on the same idea. There's a certain irony in the fact that a movie characterized by its loose sense of perspective and by the constant movement of its characters — hiking, biking, walking — never really goes beyond its opening sequence.

And yet many of "Pavilion"'s images are vivid enough to qualify as poetry: dapples of sunlight moving across skin, a sunset rippling across the surface of a lake, a boy idly playing with his 3D glasses during a movie. Working with cinematographer Chris Dapkins, Sutton manages to craft some truly striking moments — not the least of which are the numerous biking sequences, where camera and subject move to the soft click-click-clicking of the bike chains. "Pavilion" is an odd thing: a movie that manages to be immersive without being about much of anything. 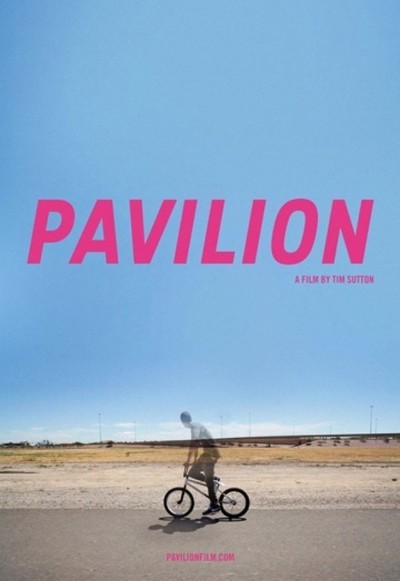