It may feel like a remix of “Notting Hill,” with an adorably dorky ordinary guy falling for a glamorous superstar, but it is based on a web comic-turned series of graphic novels by Bobby Crosby and Remy "Eisu" Mokhtar. Lopez plays Kat Valdez, a thrice-divorced pop superstar. She is constantly surrounded by the people posting on her many social media accounts and making sure she delivers on her promotional obligations. Cameras are on her every minute, either to be instantly uploaded or “banked” for future release. She is more product than person.

Kat's latest hit is called “Marry Me,” a duet with her fiancé, Bastian (Colombian singer Maluma). They have announced that they will top off her “Marry Me” concert tour by having their wedding on stage and streaming, with an expected audience of 20 million. Seconds before the ceremony she learns that Bastian has been unfaithful.

In the audience is Charlie (Owen Wilson), a grade school math teacher and single dad invited to the concert by his friend Parker (Sarah Silverman). Kat spots him in the audience, holding Parker’s “Marry Me” sign, and impulsively says yes, inviting him on stage. And he accepts, not because he has any romantic illusions but because he does not want to add to her humiliation with a rejection.

Kat and her team promise to make a contribution to Charlie’s school if he will go along with the marriage for a few months, make some public appearances, and do some interviews. He stands by her on a red carpet. She shows up at Math Club to teach the kids some cool dance moves and a lesson about resilience. He encourages her to turn off the cameras and take off the hair extensions. She encourages him to make some changes that are not really meaningful, but this movie really is not about him.

Lopez can act as we saw in “Hustlers,” “Selena,” and especially in “Out of Sight.” Here, she does not really need to. She is playing someone much like herself, a pop star and celebrity who has not been lucky in love and is still “Jenny from the block” at heart. She is “just a girl, standing in front of a boy, asking him to love her.” Wait, that last part is from “Notting Hill.” It's so easy to get them mixed up.

Lopez is the heart of the film, which rests on her warmth and pure star power. She shines in several concert performances. The songs are all bangers, though one number will be of concern to some viewers, with dancers wearing nuns’ coifs and wimples, Lopez herself barely wearing anything, and lyrics that use church to refer to love or something more physical. The title song and “On My Way” will be giving the “Encanto” songs some competition on the Hot 100.

The quiet moments with Wilson have an endearing tenderness. It is easy to suspend disbelief about actors in their 50s playing characters in their 30s. They look great. J.Lo is ageless and Wilson’s shaggy charm hasn’t changed since “Wedding Crashers.” But they bring a mature sweetness and a feeling of calm in the connection between Charlie and Kat that we do not usually see in rom-coms and it is most welcome. If "Marry Me" over-repeats its mantra about sitting in the question until the answer finds you, at least that notion reflects a seasoned patience that is a nice contrast to the usual frantic emotions of movie love stories.

Yes, the script might as well have been written by an algorithm to hit every rom-com beat, from the meet-cute to the magical connection to the setback to the happy ending, but it deserves extra credit for what it avoids. There are no silly misunderstandings, contrived situations, or cartoonishly awful people. Even the one character whose trash talk at a school competition goes too far gets a happy ending. And the “When Harry Met Sally”-style clips over the credits with couples telling their stories make the possibility of happy endings for all of us seem a little closer. 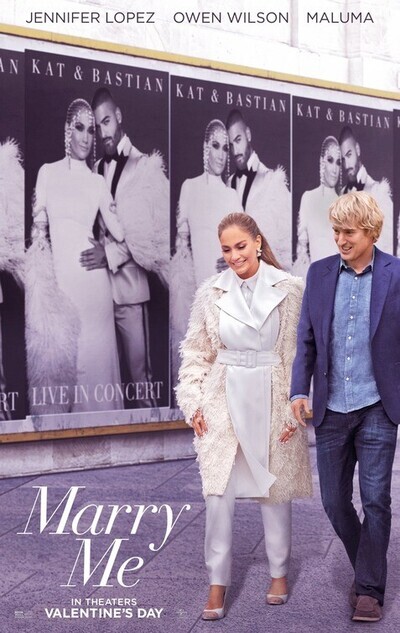 Rated PG-13 for some language and suggestive material.

Writer (based on the graphic novel by)