Defiantly episodic and inconsistent when it comes to character, the frustrating "On My Way" seeks to test the commonly held belief that Catherine Deneuve makes anything she's in better. The living legend certainly deserves little blame for this misfire but she can't handle the heavy lifting required by a script and director that feel as unfocused as the film's protagonist for at least an hour. And by the time the film's rambling narrative finally solidifies, it will be too late for all but the most diehard Deneuve admirers.

Why make one late-life crisis movie when you can make eight? Emmanuelle Bercot's third film opens with a promising shot of Bettie (Deneuve) walking down a beach. There's a flash of a younger Bettie, winner of a local beauty contest, and she stridently turns around, heading in the other direction with notably more confidence. The intent is clear. Change, likely related to her past, is about to push Bettie off her chosen course. Sadly, Bercot and co-writer Jerome Tonnere take too long to find the path to send her on and are too tonally inconsistent to make the journey interesting for audiences.

Bettie's staid life as a restaurant owner who lives with her mother is upended when she learns that the marriage of her former lover is ending. Memories of a doomed romance (along with the pending reunion of former beauty queens that Bettie resists attending) send her into a tailspin. She starts smoking again and essentially runs away from home. What follows is a series of road trip episodes like a conversation with an elderly gentlemen rolling cigarettes, a one-night stand with a younger man, an interlude with a store owner who provides shelter from the rain, and, inevitably, a return to family. As in most films like this, Bettie learns that running away from emotion and familial turmoil can only be temporary. We always return to those who know us best.

Much of Bettie's emotional upheaval is internal and Deneuve does her best to sell this character's inconsistent behavior but Bercot does her no favors at all, at least in the first act. After the revelation about her former lover, Bettie drives around crying as Rufus Wainwright blares from the soundtrack, trying to underline emotion that the script hasn't earned. We don't know why Bettie is so upset and Bercot doesn't really bother to tell us. And it's a pattern throughout the film as poor Deneuve is bounced around from episode to episode, never developing a character that feels genuine within the many plot contrivances. The first hour, in particular, is a jumbled mess of tones, lurching from one scene to another with little at all to connect them other than the film's still-engaging lead. With such a legendary star in the center and new faces for her to encounter, it almost feels like an acting challenge: "Let's see what Catherine can make out of this."

Even the filmmaking feels tonally adrift, especially in the first half, as some scenes have a languid, melancholy pace while others are played for bizarre comedy, especially some awkwardly written scenes with Bettie's grandson. It's as if Bercot was trying to make a film as adrift as her lead, which simply doesn't work if we can't identify with or even understand the motivations of poor Bettie.

The second half of the film becomes more old-fashioned and notably more effective as Bettie reconnects with her family. While the contrivances can still frustrate, Deneuve is given a chance to finally develop a character in scenes with the playful Nemo Schiffman as her grandson and charismatic Gerard Garouste as the boy's paternal grandfather. The idea that a chapter in Bettie's life had to be closed for her to start another one recalls that opening scene on the beach and hints at the film that could have been buried in "On My Way" if it didn't take such a long and winding path to get there. 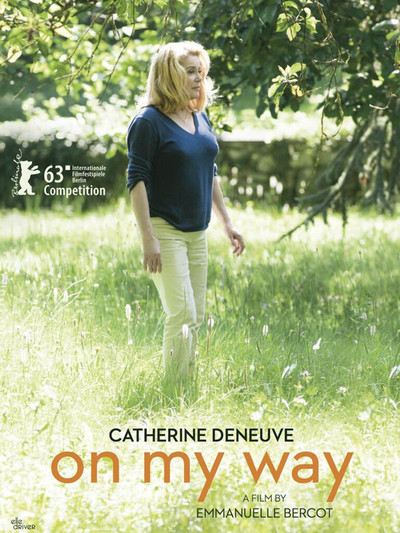