The first scene of Michael Almereyda’s graceful, enthralling chamber drama “Marjorie Prime” takes place in the well-appointed living room of a Long Island beach house. The sounds of waves outside are heard throughout. A woman in her mid-80s and a handsome man who appears to be in his 40s sit across a table and talk for a good while. If you came in not knowing the film was adapted from a play, you might guess it here.

While the dialogue sounds a bit stagey, it does draw us into the personalities of the characters. Marjorie (Lois Smith), pleasant and voluble, obviously enjoys conversing with dapper Walter (Jon Hamm), and together they explore the subject of her past, recalling, for example, two dogs named Toni the family once owned. Walter, it seems, can help in the task of recollection because he is Marjorie’s husband. Or rather, a walking, talking, smiling and very helpful image of her husband as he was several decades before.

“Marjorie Prime” is so beautifully and consistently focused on the human that I wanted to introduce Marjorie and Walter as people with a rich and complex relationship. But Walter, in addition to being a very charming and well-spoken guy, is also a hologram. He is, in fact, a “prime”—a hologram created to technologically reincarnate a dead person for therapeutic purposes (the real Walter died 15 years before). Walter Prime provides comfort to Marjorie by helping her recall her past as age slowly eats away at her memory. But their conversations also benefit him, so to speak, since his knowledge of her history must be supplied and augmented by others, including her.

Almereyda’s film belongs to a category that also includes “Eternal Sunshine of the Spotless Mind,” “Her,” “Ex Machina” and “A.I. Artificial Intelligence” but to me it’s singular in being the science-fiction movie that feels the least like a sci-fi movie. Although it evidently takes place sometime in the future, there’s virtually nothing futuristic about it; it could be set right now. Also, it’s entirely non-mechanistic; the technology behind primes goes completely un-shown and un-discussed.

Rather than gizmos or hypothetical futures, Almereyda is interested in philosophical issues concerning memory and identity. Adapted from the acclaimed 2014 play by Jordan Harrison, “Marjorie Prime” has a gentle, probing Chekhovian feel, and a deliberate dramatic approach that invites us to look at those aforementioned issues from various angles before coming to our own conclusions about them.

The film’s story has two other main characters. Marjorie shares the beach house with her daughter Tess (Geena Davis) and son-in-law Jon (Tim Robbins). Tess is troubled by various things in her past and present, including Walter Prime. It just doesn’t feel right to have this image of her dad as a young man having chats with her mom in the living room. Jon, though, is an enthusiastic supporter of the new technology; he thinks Walter Prime is good for Marjorie and is happy to share his memories of the family to help out.

Beginning with the first scene’s revelation of Walter’s nature as a hologram, “Marjorie Prime” contains a steadily accumulating stream of ingenious plot twists, sometimes very subtle or subtly revealed. To discuss these would be to venture into spoiler territory, so suffice it to say that Almereyda’s script is very sharp and especially good at delineating the film’s four main characters.

Chief among the film’s pleasures is watching the exemplary work of the actors who embody those people. Lois Smith is a veteran performer whose movie credits include “East of Eden,” “Five Easy Pieces,” “Dead Man Walking” and “Minority Report,” as well as a couple of earlier Almereyda films. She played Marjorie in both the Los Angeles and off-Broadway versions of the play, and here brings her deep knowledge of the role to luminous, assured life with a note-perfect performance. As Walter, Jon Hamm does a very capable job of balancing the ghostly and the real. As for Geena Davis and Tim Robbins, both have notable accomplishments in the resumes but I don’t know that I’ve ever seen them better than they are here.

Almereyda is also very adroit in the staging and direction of the story. While Harrison’s play was set in one room, moving it to a bright, modern beach house with a number of interiors and exteriors opens the tale’s visual atmosphere palpably, giving us the sense of nature—rain, snow, fog, the sea—framing this drama about the limits of nature.

Still, the last act struck me as more cerebrally intriguing than emotionally satisfying. That may be due to the film’s philosophical bent and focus on artificial intelligence. If so, it’s hardly a fatal flaw in a movie that leaves viewers with so much to ponder. 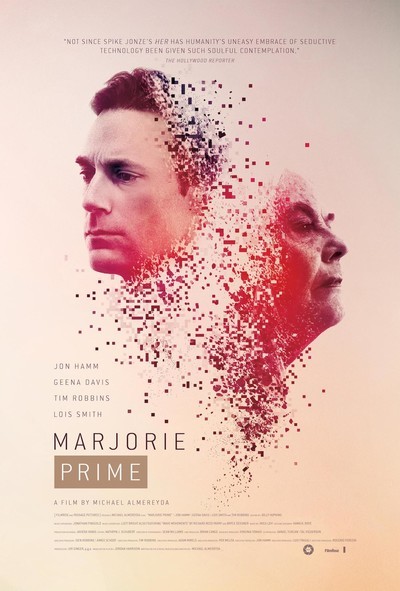