Real science fiction is about ideas, which means that real science fiction is rarely seen on movie screens, a commercially minded canvas that's more at ease with sensation and spectacle. What you more often get from movies is something that could be called "science fiction-flavored product"—a work that has a few of the superficial trappings of the genre, such as futuristic production design and somewhat satirical or sociological observations about humanity, but that eventually abandons its pretense for fear of alienating or boring the audience and gives way to more conventional action or horror trappings, forgetting about whatever made it seem unusual to begin with.

"Ex Machina," the directorial debut by novelist and screenwriter Alex Garland ("28 Days Later," "Sunshine"), is a rare and welcome exception to that norm. It starts out as an ominous thriller about a young programmer (Domhnall Gleeson) orbiting a charismatic Dr. Frankenstein-type (Oscar Isaac) and slowly learning that the scientist's zeal to create artificial intelligence has a troubling, even sickening personal agenda. But even as the revelations pile up and the screws tighten and you start to sense that terror and violence are inevitable, the movie never loses grip on what it's about; this is a rare commercial film in which every scene, sequence, composition and line deepens the screenplay's themes—which means that when the bloody ending arrives, it seems less predictable than inevitable and right, as in myths, legends and Bible stories.

The scientist, Isaac's Nathan, has brought the programmer Caleb (Gleason) to his remote home/laboratory in the forested mountains and assigned Caleb to interact with a prototype of a "female" robot, Ava (Alicia Vikander), to determine if she truly has self-awareness or it's just an incredible simulation. The story is emotionally and geographically intimate, at times suffocating, unfolding in and around Nathan's stronghold. This modernist bunker with swingin' bachelor trappings is sealed off from the outside world. Many of its rooms are off-limits to Caleb's restricted key card. The story is circumscribed with the same kind of precision. Caleb's conversations with Ava are presented as discrete narrative sections, titled like chapters in a book (though the claustrophobic setting will inevitably remind viewers of another classic of shut-in psychodrama, Stanley Kubrick's film of "The Shining"). These sections are interspersed with scenes between Caleb, Nathan, and Nathan's girlfriend (maybe concubine) Kyoko (Sonoya Mizono), a nearly mute, fragile-seeming woman who hovers near the two men in a ghostly fashion.

Because the film is full of surprises, most of them character-driven and logical in retrospect, I'll try to describe "Ex Machina" in general terms. Nathan is an almost satirically specific type: a brilliant man who created a revolutionary new programming code at 13 and went on to found a Google-like corporation, then funneled profits into his secret scheme to create a physically and psychologically credible synthetic person, specifically a woman. This is a classic nerd fantasy, and there is a sense in which "Ex Machina" might be described as "Stanley Kubrick's Weird Science."  But despite having made a film in which two of the four main characters are women in subservient roles, and making it clear that Nathan's realism test will include a sexual component, the movie never seems to be exploiting the characters or their situations. The movie maintains a scientific detachment even as it brings us inside the minds and hearts of its people, starting with Caleb (an audience surrogate with real personality), then embracing Ava, then Nathan (who's as screwed-up as he is intimidating), then finally Kyoko, who is not the cipher she initially seems to be.

"Ex Machina" is a beautiful extension of Garland's past concerns as a screenwriter. Starting with Danny Boyle's "The Beach," based on his novel, and continuing through two more collaborations with Boyle, "28 Days Later" and "Sunshine" and the remake of "Judge Dredd," Garland has demonstrated great interest in the organization of society, the tension between the need for rules and the abuse of authority, and the way that gender roles handed down over thousands of years can poison otherwise pure relationships. The final section of "28 Days Later" is set in a makeshift army base where soldiers have taken up arms against hordes of infected citizens. No sooner have they welcomed the heroes into their fold than they reveal themselves as domineering monsters who want to strip the tomboyish women in the group of their autonomy and groom them as concubines and breeders in frilly dresses, in a skewed version of "traditional" society. The soldiers, not the infected, were the true zombies in that zombie film: the movie was a critique of masculinity, especially the toxic kind.

Likewise, "Ex Machina" is very much about men and women, and how their identities are constructed by male dominated society as much as by biology. Nathan actively rebels against the nerd stereotype, carrying on like a frat house alpha dog, working a heavy bag, drinking to excess, disco dancing with his girl in a robotically choreographed routine, addressing the soft-spoken, sensitive Caleb as "dude" and "bro", and reacting with barely disguised contempt when Caleb expresses empathy for Ava. It's bad enough that Nathan wants to play God at all, worse still that he longs to re-create femininity through circuitry and artificial flesh. His vision of women seems shaped by lad magazines, video games aimed at eternal teenagers, and the most juvenile "adult" science fiction and fantasy.

As Ava becomes increasingly central to the story, the movie acquires an undertone of film noir, with Nathan as the abusive husband or father often found in such movies, Caleb as the clueless drifter smitten with her, and Ava as the damsel who is definitely in distress but not as helpless as she first appears (though we are kept guessing as to how capable she is, and whether she has the potential to be a femme fatale). The film's most intense moments are the quiet conversations that occur during power blackouts at the facility, when Ava confesses her terror to Caleb and asks his help against Nathan. We don't know quite how to take her pleas. Despite her limited emotional bandwidth, she seems truly distressed, and yet we are always aware that she is Nathan's creation. Her scenario might be another level in the simulation, or another projection of Nathan's twisted machismo. There is also canny commentary, conveyed entirely through images, which suggests that "traditional" femininity is as artificial and blatantly constructed as any android siren, which makes creatures like Ava seem like horribly logical extensions of a mentality that has always existed. (This movie and "Under the Skin" would make an excellent double feature, though not one that should be watched by anybody prone to depression.)

Throughout, Garland builds tension slowly and carefully without ever letting the pace slacken. And he proves to have a precise but bold eye for composition, emphasizing humans and robots as lovely but troubling figures in a cold, sharp mural of technology. The special effects are some of the best ever done in this genre, so convincing that you soon cease marveling at the way Ava's metallic "bones" can be seen through the transparent flesh of her forearms, or the way that her "face" is a fixed to a silver skull.

Garland's screenplay is equally impressive, weaving references to mythology, history, physics, and visual art into casual conversations, in ways that demonstrate that Garland understands what he's talking about while simultaneously going to the trouble to explain more abstract concepts in plain language, to entice rather than alienate casual filmgoers. (Nathan and Caleb's discussion of Jackson Pollock's "automatic painting" is a highlight.) The performances are outstanding. Isaac's in particular has an electrifying star quality, cruelly sneering yet somehow delightful, insinuating and intellectually credible. The ending, when it arrives, is primordially satisfying, spotlighting images whose caveman savagery is emotionally overwhelming yet earned by the story. This is a classic film. 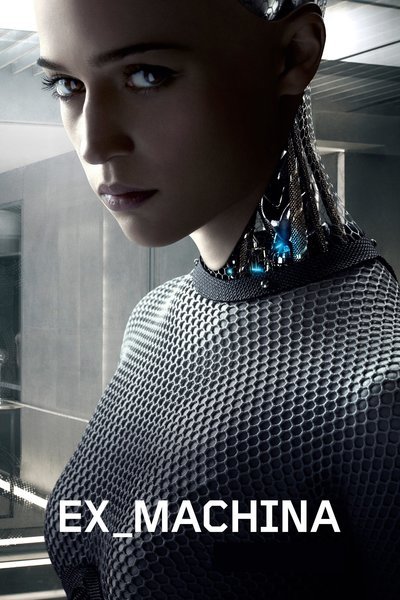