What made “I Love Lucy” a hit was its comedy. What made it a classic was its love story. Lucy Ricardo was not the only wacky housewife with a sometimes annoyed but mostly bemused husband in the early days of television sitcoms. But audiences were very aware that unlike the other couples, including another nightclub performer turned sitcom character Danny Thomas in “Make Room for Daddy,” the characters in “I Love Lucy” were played by a real-life married couple: Lucille Ball and Desi Arnaz.

It was easy to believe we were seeing a heightened version of their off-screen relationship. The audience who watched the episode where Lucy tells Ricky they are going to have a baby knew that they were seeing an intimate moment for Lucille and Desi, not their characters, embracing as she wiped away a tear of joy. The cover of the first issue of TV Guide magazine featured their real-life newborn, the same week that the son of their television counterparts arrived in one of the series’ most memorable episodes, watched by more than 68 percent of American homes. “I Love Lucy” has been playing continuously on televisions around the world ever since.

There’s been something of a renaissance in the Lucy metaverse over the past year, with the excellent third season of Turner Classic Movies’ podcast series devoted to the career of Lucille Ball, and the release of "Being the Ricardos," a high-profile, Oscar-nominated 2021 Aaron Sorkin film with Nicole Kidman and Javier Bardem as Ball and Arnaz. And now Amy Poehler has directed a documentary called “Lucy and Desi,” with never-before-seen archival recordings, including taped recollections and home movies, and comments from the Arnaz children and from fellow legends Norman Lear, Bette Midler, and Carol Burnett. Poehler clearly feels an unstated debt to Ball’s fearlessness as a comic performer and the strains that an overwhelming workload puts on a marriage.

She wisely lets Ball and Arnaz tell much of the story themselves, and it is very much the story of their relationship, not their professional success. Poehler has said she wanted to make the movie about what people felt rather than what they did. This is not the film to find out about one of the most significant innovations in television history, when Arnaz insisted that the show be recorded on film, not blurry kinescopes, though it is as important in the enduring popularity of the show as the scripts, guest stars, and once-to-a-planet comedy performance skills of America’s favorite redhead. It is not the film to explore what made Ball a legend, though one of the documentary’s highlights is Ball’s description of her sense of comedy as “an enchanted sense of play,” completely committed to her character’s belief in whatever was happening, no matter how bizarre.

And it is not about Ball’s greatest hits and most iconic moments, though Poehler does try to lift Arnaz to her level, as a performer (clips of the conga going viral) and producer. Instead, it is about their vulnerabilities as individuals and as a couple. The only person in the film who does not recognize Ball’s gift for comedy was Ball herself, who tells us more than once that she is not very talented, attributing her success to working harder than anyone else. “If you’re not beautiful and you’re not bright, you do anything you can,” she says. “They never had to ask me twice to do anything.” That same work ethic, shared by Arnaz, was not as beneficial in their off-camera relationship as their increasing obligations pulled them in different directions.

The network did not want to cast Arnaz as Ball’s husband. But Ball was tired of having her husband gone all the time because he was performing in night clubs; she wanted something they could do together. It worked very well for a few years. However, Arnaz had bigger ambitions. They bought RKO, the largest independent movie studio in Hollywood, and renamed it Desilu, where they produced some of the most successful television series of the 20th century, from the original “Star Trek” to “Mission: Impossible” and “The Andy Griffith Show.” It is poignant to hear Ball and Arnaz confess that they were overwhelmed by their success, feeling pulled to keep getting bigger but not enjoying any of it, especially, for Ball, the administrative, non-performing responsibilities. Arnaz grew up rich and wanted to stop. Ball grew up poor and could not stop working.

They survived failures but success was a bigger challenge. Poehler and writer Mark Monroe acknowledge but downplay the role of Arnaz’s womanizing and drinking as a reason for their break-up, almost suggesting it was somehow the fault of Ball’s greater success as a performer. Their daughter, Lucie Arnaz Luckinbill sadly describes a disastrous family trip where her parents argued the whole time.

As we move further from the beginnings of easily accessible technology like home movies, video, and cell phones, will be seeing more and more documentaries looking back at influential people through the literal lens of archival footage; some new, some very familiar to us, both reframed by previously unrevealed information. Recent examples include series about Bill Cosby and Woody Allen as well as films about Amy Winehouse, Kurt Cobain, and Whitney Houston. This film is exceptionally skillful in matching the footage to the commentary in thoughtful, illuminating, and often touching pairings.

It is terribly sad to see the later clips of their performances in this context. Their deep connection was palpable in “I Love Lucy.” The strain in their relationship is painfully evident in the follow-up “Lucy and Desi Comedy Hour.” They were still playing Lucy and Ricky on television, but Ball and Arnaz looked distracted and awkward. It is, after all, though, a love story. And the final scene, as Lucille Ball listens to the words Desi Arnaz left for her to hear when she received her Kennedy Center Honor, is as tender a love story as has ever been filmed. 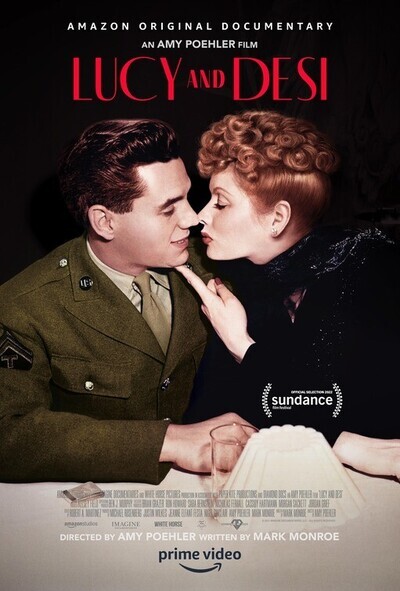 Lucille Ball as Self (archive footage)

Desi Arnaz as Self (archive footage)

Lucie Arnaz as Self

Bette Midler as Self

Carol Burnett as Self

Laura LaPlaca as Self

Norman Lear as Self

Desi Arnaz, Jr. as Self

Journey Gunderson as Self

Gregg Oppenheimer as Self

Eduardo Machado as Self