I'm not the sort of film critic who jots down ecstatic remarks during a screening. But about an hour into "Live Free or Die Hard," I scrawled in my notebook: "Ah, American movies!"

This might have been after a sequence in which New York City Police Detective John McClane (Bruce Willis), driving through Washington, D.C., with a nerdy hacker named Matt (Justin Long) in custody, evades the bad guys' pursuing helicopter by crashing into a fire hydrant so that the force of the vertical spray knocks the chopper out of its flight pattern ... then gets trapped in a tunnel full of cars speeding both ways and one car tumbling through the air directly at them, and they miss being killed because just as the car is to land on them, two other vehicles drive on either side of the guys and the hurtling car lands smack on top of the other two ... and then McClane jumps in another car, speeds it up a makeshift ramp at the end of the tunnel and jumps out just in time to see it hit and demolish the low-flying chopper. "Jesus," says Matt, "you killed a helicopter with a car!" McClane: "I ran out of bullets."

It's been said by our friends, and by our foes: Movies plus cars equals America. Well, car stunts plus a star like Bruce Willis equals a good action movie. A scene like the one in "Live Free or Die Hard" lets crazy-gifted stunt drivers bend the laws of physics, geometry and adrenaline to create a moviegoer's contact high. And since it seems to be achieved with a minimum of computer legerdemain and a maximum of ingenious skill, the scene triggers the satisfyingly old-fashioned vibe audiences used to get from action-movie entertainment they believed people had risked their lives to provide. (Or maybe the digital people have got so good at their job, it just looks handmade.)

There are also some potent, graceful physical stunts, with baddies swinging lithely over railings and through the cogs of menacing machinery. (Parkour, the streetwise athletic discipline that got its first big showcase in the French film "District 13" and was appropriated for several snazzy scenes in "Casino Royale" (2007), gets another handsome workout here.) The impact of these stunts, and the gritty, industrial look favored by director Len Wiseman, will make you think that somebody got dirty making this movie. Actually, a Willis stunt double, Larry Rippenkroeger, got pretty banged up after a 25-ft. fall from a scaffold to the pavement: he sustained two broken arms, a skull fracture, fractured ribs and a punctured lung. Rippenkroeger, happily, is now back at work. Stunt guys can bounce back from almost anything.

In a couple of pleasing ways besides the car-nage and the stunts, this fourth entry in the "Die Hard" series -- and the first since "Die Hard With a Vengeance" in 1995 -- is an American anachronism. It renounces the recent movie trend of foreign, mostly Muslim, terrorists for the good old, bad old U.S. type. For too long Hollywood has ceded these plum roles to Asians and Middle Easterners, as if America didn't have its own colorful history of homegrown crazies determined to wipe us all out. Does no one remember Ted Kaczynski, Timothy McVeigh, the still-at-large anthrax mailer from September 2001? Our popular culture has been falling sadly behind in the Evil Genius category. "Live Free or Die Hard" is a solid start in helping us close the Political Psychopath gap -- in reopening, for movie business, our Department of Homeland Terrorism.

The villain here, Thomas Gabriel (Timothy Olyphant), is a computer guru who created the ultimate security program for the federal government, and since he believes his masterpiece was horribly compromised, this ex-Fed decides to show his old bosses what life would be like if everything run by computers -- which is to say, just about everything -- were to shut down. Essentially a higher-IQ update of the disgruntled postal worker, Gabriel is played by Olyphant as a white-collar nut-case: a good-looking fellow with a professionally calm voice (the better to mask his malevolence) and the permanently intense stare that other people would get only if they'd had Murine dropped in their eyes every 10 seconds.

It's the bane of our Internet age that the basic visual motif of action epics, from the first "Mission Impossible" movie on, is: shots of guys typing. We see the villains crouched over their Macs to input some world-destroying program, then the good guys trying to type in the antidote. "Live Free or Die Hard" has a lot, too much, of this too, but at least it's true to the plot dreamed up by Mark Bomback and David Marconi. Gabriel orders his brainy minions to shut down the nation's stop lights, electricity and phone lines, while Matt -- the hacker who had, unawares, devised an algorithm that was used in Gabriel's grand scheme -- struggles to break the code while dodging bullets coming his and McClane's way. "I honestly don't think I can handle any more people trying to kill me," the frazzled Matt complains to McClane, who replies, from the experience of the first three "Die Hard"s, "Oh, you get used to it."

McClane is the central anachronism of the piece -- "a Timex watch in a digital age," as Matt tells him -- and the movie's definitive statement that there's still room for a dinosaur hero, if only to fight the enveloping military-computerate complex. (John McClane for President!) Much has been made of Willis' weathered look, and his loss of hair, and a paunch that I didn't notice. But the man is 52, and the one star from the Bronzed Age of 80s action movies who still can persuasively embody a haunted, implacable stud. Chuck Norris went into TV, and Jean-Claude VanDamme to made-for-video cheapies. Schwarzenegger's in the public sector. Jackie Chan has a third "Rush Hour" movie coming out in August, but a lifetime of martial-arts exertions has rendered him creaky. Only Willis remains -- the last action hero.

The first Die Hard picture came out in 1988, when Willis was a pup of 33. He's played this character, on and off, for most of his professional career, and it still suits. McClane gives him juice; he gives McClane grit. The part lets him jump around and show off his agility. (In what may be a one-stunt-too-many scene within the movie's long climax, he hitches a ride on the wing of a fighter jet.) In turn, Willis, with his coiled poise and the compact gestures of an assured star, exudes worldly wariness and cosmic weariness, as if he'd achieved a state of Zen machismo. He's so close to a still life, his own heroic statue, that we may wonder if the McClane character is even alive. "I thought I killed you already," a bad guy says, and Willis-McClane replies, "I get that a lot."

He survives that licking to keep on kicking, notably in a hanging-by-a-car-fender-at-the-top-of-an-elevator-shaft fight scene with Gabriel's hottie henchwoman (played by Vietnamese-Polish-Irish-American stunner Maggie Q and her stunt-double, Boni Yanagisawa). "Live Free or Die Hard" has a lot of this muscular bustle, considering its the first movie in the series not rated R. To get a PG-13, Wiseman & Co. made the violence cleaner, leaving out the reaction shots you'd get in an R-rated film of, say, a thug with his face blown off. At times it plays like the airline version of the real movie. But it still packs a punch, lots of them.

The other characters are around mostly to take punches. To establish Matt's credentials as a young cyber-dweeb, Long, best known as the hip kid ("I'm a Mac") in the Apple commercials, is required to do more whining than absolutely necessary, or attractive; but he's basically here to be the audience's surrogate, to express amazement at flights of fancy and lapses into implausibility. As McClane's daughter Lucy, Mary Elizabeth Winstead -- who ornamented the year's other big car-stunt movie, Quentin Tarantino's "Death Proof" -- has enough resentment and resolve to suggest a familial link to our prehistoric hero. Writer-director Kevin Smith ("Clerks.") has a nice bit as the basement-dwelling Jabba the Hutt of hackers. But did no one think to fill the role with Long's partner in the Apple spots ("I'm a PC"), John Hodgman? His sedentary smarminess and air of knowing more than he does would make for a wonderful movie character. Or movie critic.

In the movie's final showdown, Gabriel sneers: "On your tombstone it should read, 'Always in the wrong place at the wrong time.'" (To which McClane with his trademarked "Yippie-ki-yay," etc. etc.) It turns out that McClane, Willis and "Live Free or Die Hard" are in the right place at the right time. In the middle of a summer season already exhausted with sequels depending too much on visual effects, here's a throwback to remind you what American movies can do best. Enough of the ghost pirates and silver surfers! Up with cool stunts and car crashes! Real action films may be the wave of the past but, as this one splendidly shows, they'll live free before they die hard.

Richard Corliss writes on movies and popular culture for Time magazine and Time.com. His tribute to Roger Ebert is here:
www.time.com/time/arts/article/0,8599,1636520,00.html 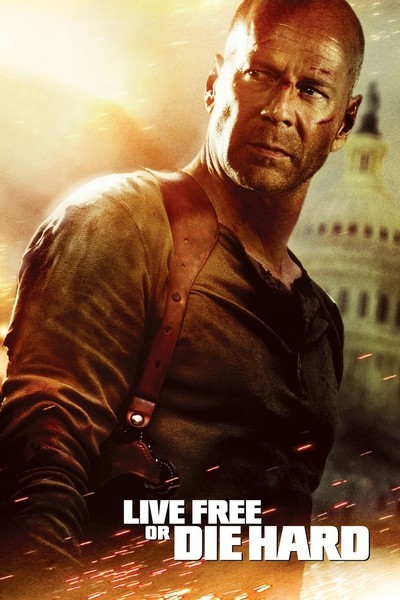