The movie teams up Jackie Chan, king of lighthearted action comedy, and Chris Tucker, who crosses Eddie Murphy with Chris Rock and comes up with a guy who, if you saw him a block away, you'd immediately start wondering how he was going to con you. There are comic possibilities even in their personal patterns. Chan is not known for his effortless command of English, and Tucker is a motormouth. Chan's persona is modest and self-effacing, and Tucker plays a shameless self-promoter.

The story: During the last days of Hong Kong's status as a British colony, supercop Chan busts up a smuggling ring, but the masterminds escape to the United States. There they kidnap the daughter of the Chinese consul, who tells the FBI he wants Chan, a family friend, flown in to help with the investigation. The feds want nothing to do with a cop from overseas, and they also don't want the LAPD involved. So they get the idea of pairing up the Chinese guy and the L.A. cop so they can keep each other out of the way.

At L.A. police headquarters, this idea is well-received after the chief (the redoubtable Philip Baker Hall) realizes it's a way to get his most troublesome detective out of his hair. That would be Carter, played by Chris Tucker as the kind of loose cannon who roars around the streets in a vintage Corvette and works undercover in dangerous situations.

Neither cop likes teamwork. Both work best alone. But Chan doesn't know his way around L.A., and Tucker needs to earn points with his chief. That's enough to fuel the lightweight screenplay by Jim Kouf and Ross Lamanna, which contains a lot of genuinely funny lines and even a reference to Roscoe's Chicken and Waffles, of “Jackie Brown” fame.

Chan is, of course, noted for his stunts, which he performs himself, without doubles. “Rush Hour” has a neat little example of his wall-climbing ability and a breathtaking sequence in which he leaps from a double-decker bus to an overhead traffic sign to a truck. And there's a scene in a high atrium where he falls from a beam and slides to safety down a silk streamer. (It's useful to point out, I suppose, that although Chan does his own stunts, they are indeed stunts and not death-defying risks; he does what a stunt man would do, but with the same safeguards and deceptive camera angles. He is brave, agile and inventive, but not foolish.) I like the way the plot handles Soo Yung (Julia Hsu), the consul's young daughter. Instead of being treated like a helpless pawn, she's portrayed as one of Jackie's little martial arts students in Hong Kong (“Have you been practicing your eye gouges?”), and when the kidnappers try to carry her off, she causes them no end of trouble. I also liked the way Chris Tucker (who was funny in “Money Talks”) talks his way into and out of situations, using a distracting stream of dialogue while he figures out what to do next. “Rush Hour” is lightweight and made out of familiar elements, but they're handled with humor and invention, and the Wunza formula can seem fresh if the characters are Botha couple of engaging performers.

Footnote: All Jackie Chan movies end with outtakes, which usually show him missing on stunts and breaking bones, etc. This time the emphasis is mostly on bloopers, where he and Tucker blow their lines. I like the missed stunts better. It's not that I enjoy seeing Jackie waving bravely from the stretcher as they wheel him into the ambulance, but that there's a tradition involved. To be sure, with the two major stunts in this movie, any mistakes could have been his last. 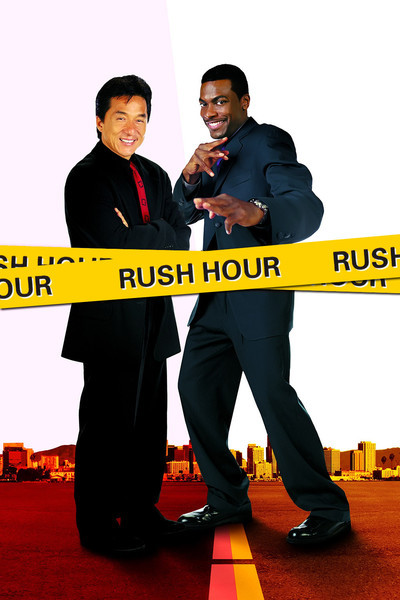 Rated PG-13 For Sequences Of Action/ Violence and Shootings, and For Language