What exactly do we want from all these inoffensive, Christmas-inspired romantic-comedies? (That includes “Last Christmas,” another tune-inspired rom-com from this week starring Emilia Clarke and Henry Golding, but a much more rewarding one, in my book). By the looks of it, we want characters to find warmth in either a person or a purpose, a sprinkle of holiday virtues, and just a little personality to cover up all the gears of these freakishly mechanical products. As a bland addition to the already low-stakes tradition of Xmas rom-coms, “Let It Snow” could use a whole lot more tinsel.

Adapted from the book by John Green, Maureen Johnson and Lauren Myracle, director Luke Snellin’s "Let It Snow" follows a group of high school seniors on a snowy Christmas Eve, each with some void to fill, or a vulnerability to be addressed. They're like junior versions of rom-com prototypes, like introverted Julie (Isabela Moner from “Dora and the Lost City of Gold,”) who hangs out with a famous, secretly lonely pop star named Stewart (Shameik Moore of “Spider-Man: Into the Spider-Verse”), and downplays what others would consider a fantasy day with him. Across town, the neurotic Tobin (Mitchell Hope of “Descendants”) wants to say something to his Sonic Youth t-shirt-wearing friend and longtime crush The Duke (Kiernan Shipka, of “Chilling Adventures of Sabrina”), but is just too gosh darn shy to do so. Then, there’s the frustrated Addie (Odeya Rush of “Lady Bird”), who is so caught up in getting attention from her crummy boyfriend that she pushes away her truly accepting friend Dorrie (Liv Hewson of “Santa Clarita Diet”), who has her own problems crushing on a girl who isn't out.

You can guess where all of these stories go—it’s not just the Waffle House party denouement, arranged by cheesy DJ Keon (Jacob Batalon of "Spider-Man: Homecoming"), that’s the obvious destination—you’ll just wish it tried to be more fun and funny along the way. With so many characters to juggle, and emotional boo-boos to nurse, “Let It Snow” always feels in motion, in a bad way. It doesn’t have those beats that help characters take after the charisma of their respective actors, or the inspired comedy that shakes up such automatic storytelling. It's funny when Julia dismisses snow as the “Spanx of weather,” but "Let It Snow" doesn't give her enough of that wit, or anyone else.

The whole enterprise gets some '80s teen comedy energy with two major factors: it takes place in an Illinois suburb like John Hughes movies do, and Joan Cusack appears as a wise snowplow driver who is covered in tin foil. Cusack even talks about Christmas Eve as if it were a prom night in a Hughes story, wistfully saying that it’s “It's the eve of everything, of the rest of your life.” But those Hughes tales know that a little gravity makes the lighter stuff stand out more—the biggest standout device is a beer keg that's treated like a sacred Christmas turkey, even though everyone is underage.

The underserved all-star cast of "Let It Snow" is at least striking enough to distract you from the fact that these characters have little personality outside of the flaws they need fixed. The farthest this script goes with giving them some color is in the music choices, which either leads to the catchy needle drops that surround them (Slow Club, BØRNS, Georgia, and other bands this movie hipped me to), or scenes in which they sing and dance. Duke and Tobin have an impromptu church organ duet to The Waterboys’ “The Whole of the Moon,” and while that scene might bungle the tension between them—it makes their feelings so frustratingly obvious—it’s probably the best example of the movie's otherwise dissipating cuteness.

“Let It Snow” is predictable and prodding at best—that's not the problem. Because even if Christmas rom-coms work with the lowest bar of movie-watching expectations, and are primarily about gifting you exactly what you expect, it’s the thought that counts. “Let It Snow” can’t even get that right. 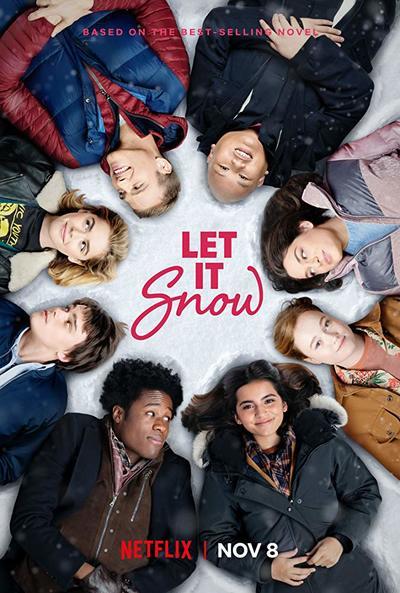