Dora and the Lost City of Gold

You may be dreading the prospect of having to schlep with your kids to the multiplex to see “Dora and the Lost City of Gold.”

The idea of sitting through a big-screen version of the long-running Nickelodeon series “Dora the Explorer” probably sounds like pure torture—even more facile messaging, rudimentary animation and sing-songy delivery for the littlest viewers. Sure, the show means well, and its emphasis on Latinx culture and bilingual education is essential, but a little goes a long way. At home, you can tune out, check your phone, fold some laundry, do anything else besides actually watch an entire episode of “Dora.”

But I am here to tell you that you will be shockingly entertained. “Dora and the Lost City of Gold” manages to ride a fine line between being true to the characters and conventions of the series and affectionately skewering them. Director James Bobin and co-writer Nicholas Stoller, who previously collaborated on the most recent “Muppets” movies, achieve a similar sense of humor and tonal balance here. They’re making fun of the inherently surreal nature of the show without tipping all the way over into parody or cruelty. They recognize how insane it is that Dora’s friends include a talking backpack and map, for example, or that her chief adversary in the jungle, Swiper, is a fox wearing a bandit’s mask. But they also see the importance of celebrating a strong, confident little girl with a kind heart, resourceful mind and fearless spirit.

Pulling off this tricky feat at the center of it all is the actress playing Dora herself, the magnetic Isabela Moner, whose performance is reminiscent of Amy Adams’ thoroughly delightful work in “Enchanted.” She’s giddy and guileless—borderline manic at times—and she has an unflappably sunny demeanor no matter the scenario. Whether she’s encountering a deadly, poisonous frog or digging a hole to help a friend relieve herself in the wilderness, she’s got a can-do attitude and likely a song for every occasion. But Moner is also in on the joke, bringing expert comic timing and just the right amount of a knowing wink to these perky proceedings. Following supporting roles in films including “Transformers: The Last Knight” and “Sicario: Day of the Soldado,” this is a star-making performance—so much so that it makes you wish the whole film were as good as she is.

Dora has grown up in the Peruvian rainforest with her zoologist mother (Eva Longoria) and archaeologist father (Michael Peña). It’s an idyllic existence that has sharpened her wits and fostered her curiosity, but it hasn’t exactly made her street smart. In fact, she’s never really had any other friends her age—or human friends, period—besides her cousin Diego, whom she hasn’t seen since she was a little girl. Now that she’s a teenager, her parents have decided to send her to Los Angeles to attend high school with Diego (Jeff Wahlberg) while they go on a dangerous mission to find the elusive, mysterious Parapata, the lost city of gold. (Adriana Barraza, part of the strong Latinx cast, brings grace to the role of Dora and Diego’s abuelita.)

Dora’s fish-out-of-water antics are quickly and consistently amusing, whether she’s offering a cheery hello in English and Spanish to every stranger on the street or navigating the pitfalls of public-school adolescence. She’s so darn innocent and earnest, you can’t help but root for her—or at least hope she’ll survive. Wahlberg brings a deadpan humor as the increasingly mortified Diego, while Madeleine Madden plays the bossy queen bee who’s threatened by her smarts and Nicholas Coombe is the self-deprecating nerd who’s enamored of them.

If only the story had remained in L.A. There’s plenty of material to mine there as Dora strives to find her way in such a vastly different environment while still staying true to herself. But the script from Stoller and Matthew Robinson contrives to send Dora, Diego, and their friends back to South America for a series of “Indiana Jones”-lite adventures. There, they team up with the frantic and grating Eugenio Derbez as a fellow explorer who’s also searching for Parapata. A series of “jungle puzzles,” as Coombes’ character calls them, causes the film to fall into a steady and episodic rhythm, which is a bit of a letdown compared to the lively and subversive nature of the first half.

But if you’ve ever wondered what to do if you should find yourself stuck in quicksand, Dora has the answer to the dilemma—and every other one, for that matter. 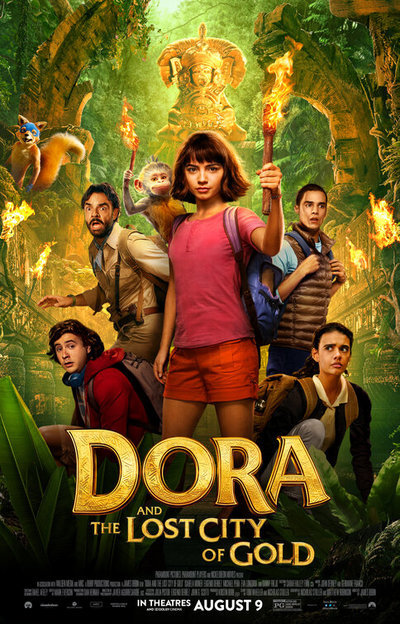 Rated PG for action and some impolite humor.

Writer (based on the series created by)