It’s that time of year where multiplexes across the nation prepare to serve up Christmas fare as sugary as a cup of eggnog. The love-to-hate-it schmaltz and syrupiness of it all can be pleasant for sure, if the output is something wittier and more starry-eyed than “Last Christmas,” a seasonal rom-com with little romance and even fewer laughs to spare. A shame, as its blindingly trimmed package is shiny enough—directed by the comedy genius Paul Feig (“Bridesmaids”), co-scripted by Emma Thompson and Bryony Kimmings, starring Emilia Clarke of “Game of Thrones” and Henry Golding, who left his mark on “Crazy Rich Asians” as a timeless leading man. Plus, there is the wall-to-wall George Michael soundtrack, including “This Is How (We Want You to Get High),” a handsome, never-before-released song from the late artist, serving as the pretty bow on top. And yet, what’s inside this gift box feels curiously joyless for what looks to be a foolproof recipe on paper—“Last Christmas” only succeeds in reminding you pre-Thanksgiving that soon it will be holiday shopping time, rejoice!

But if you’re the type who loves to visit year-around Christmas stores in July—like the overstuffed one the frantic Londoner Kate (Clarke, generically endearing) works at—then you might find some magic in “Last Christmas,” however stale. Just don’t expect the card-carrying George Michael fan Kate to be the spreader of holiday cheer here. Clad in an elf costume and matching pointy slippers she might be, but the former chorus girl with dreams of a stage career is more a mess-maker than an organized helper of Santa. And by Santa, I mean a character with a self-chosen name played by Michelle Yeoh (creating what wonder she can with her cringe-worthy part), who owns the shop “Yuletide Wonderful” on a busy, twinkling square of London and expects great things from Kate with a tough, maternal sort of affection. Meanwhile Kate—donned in a leopard coat when she’s not selling peculiar trinkets—keeps running late for work, making bad decision after bad decision, couch-surfing (London circa 2017 doesn’t appear to be a reasonable city on an elf’s salary) and braving her familial problems. Not to mention a mysterious heart defect she struggles with—we learn in bits and pieces that she had recently been taken ill with certain complications and can’t afford to lead an irresponsible lifestyle.

Her family, immigrants from former Yugoslavia, certainly thinks so. There is her over-concerned, guilt-tripping mom Petra (Thompson, bit of an offensive caricature of an émigré) who intensely dotes on her two daughters—the other one being the dependable and disciplined Marta (Lydia Leonard), who hides from her parents that she is a lesbian in a stable relationship. There is also their hardworking father Ivan (Boris Isaković), who’s made a good home for his family in London. Still, something seems to be missing from Kate’s life in the waning days of 2017, despite being surrounded by supportive figures she doesn’t quite deserve the sympathy of. Then comes along the mysterious Tom (Golding, making good use of his effortless charms), appearing from out of nowhere, bringing Kate’s guard down slowly and igniting both a sense of kindness and self-worth in her; so much that with Tom’s influence, Kate starts volunteering at a homeless shelter on a frequent basis.

Rest assured, there will be a “Love Actually”-esque performance to cap off the romp and a twisty pay-off (albeit, a frustrating one) to conclude its “Just Like Heaven” vibe that manages to romanticize sparkly streets of London more than the couple that strolls through them. While “Last Christmas” does a decent job of cozily resolving Kate’s family issues and through Gary Freeman’s production design, transforming London into a jolly old holiday greeting card, it forgets to build chemistry between its seeming lovebirds, who live inside the lyrics of the eponymous Wham! tune more than they realize. It doesn’t help that neither Yeoh nor Thompson play a character that remotely resembles real people in a film that only brushes over the anxieties of immigrants in the still-early days of Brexit. There will be fans of this intensely rich Christmas pudding—always a better idea in theory than practice—but you might find you’ve had more than enough after only a couple of bites. 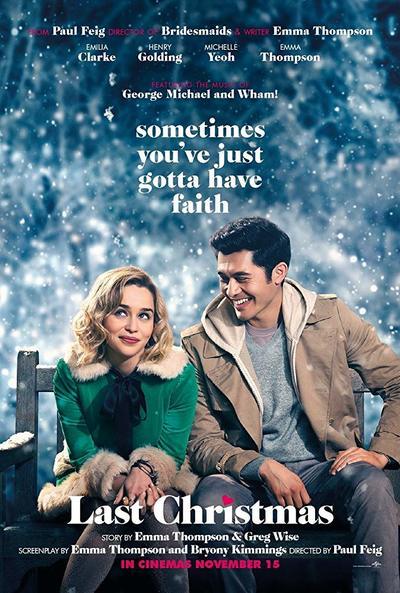