"Joy Ride" is a documentary about two veteran comedians, Bobcat Goldthwait and Dana Gould, who went on tour together in 2019, got in a car crash, and continued the tour. We see them performing together onstage, in long sections that let us appreciate the rhythm of their respective styles as well as the way their long friendship informs their onstage banter. The setup makes it sound like an American answer to "The Trip," the long-running collaboration between comedians Steve Coogan and Rob Brydon, but it's much shaggier and more low-tech. Probably half of it consists of footage of Goldthwait and Gould onstage together, and the rest is them driving from gig to gig on interstate highways in a variety of weather conditions.

Sometimes the stage material is allowed to stand on its own, in a committed if fragmented and arbitrary-seeming way. Some of it is knock-down brilliant, particularly Gould's routine about the viciousness of chimpanzees, but a lot of the rest might make you wonder if this was really the best material they had. Other times the standup bits segue into autobiographical stories from one comic or the other about their obsessions, upbringing, and hangups. Goldthwait and Gould come from similar backgrounds—they're both middle-aged American white men from Roman Catholic households in upstate New York that could be generously described as dysfunctional—which, by their own admission, is a big part of the reason they click.

Biography-wise, Gould appears to have gotten the worst of it. There are harrowing stories of his mother, a homegrown religious fanatic, praying to the televised image of evangelist Oral Roberts, and the scenario that Gould acts out to demonstrate his ingrained terror and shame about masturbation is one of those moments that could break up a gathering of friends who thought they were sharing warmhearted childhood anecdotes until one of them told a tale that made everyone else's blood run cold then capped it with a grin and an aw-shucks laugh. That being said, Goldthwait's family situation wasn't typical, either. His father was an amateur entertainer who sounds like an anonymous 1970s suburban answer to Goldthwait hero Andy Kaufman. The story about his dad and a jack-in-the-box yields a punchline image worthy of the Joker.

The film is directed by Goldthwait, a 1980s shock comic, or anti-comic, who eventually pulled back from standup to become a writer/director. He infuses the material with the mordant humanist sensibility that he brought to movies like "World's Greatest Dad." He talks a little bit about the decision to switch careers here, and it's impossible not to respect his choice when you hear him talk about how he really doesn't care whether other people consider him a success any more, as long as he gets to make art on his own terms. (He likes to brag that his films make "hundreds of dollars.")

This one is a mostly likable effort, but it doesn't quite feel like a self-contained movie with a shape and a discernible point; it's more of a collection of material arranged in a way that more or less makes sense. It's neither fish nor fowl, categorically: there isn't enough standup to call it a concert movie and there isn't enough road material to call it a road movie and there isn't enough material delving into the idea of comedy and funniness to justify some of the detours it takes in those sections. And a couple of those detours are badly misjudged, in particular Gould's routine about the innate stupidity of the Ku Klux Klan as evidenced by their ridiculous outfits. It might've worked as a short bit, but it goes on so long that it edges into that iffy comedic zone of material that's supposed to demonstrate that "the best weapon against hatred is ridicule," which will be news to the Klan's targets.

Goldthwait screws the pooch more spectacularly in an even longer story about the time he was on a commercial flight with a Special Olympics team when an engine exploded. The pilot comes on to tell the passengers that they're making an emergency landing on an airport runway covered in fireproof foam, and when the pilot mentions that there's a fire truck at the end, one of the passenger's with Down Syndrome delightedly exclaims, "Fire truck!" Goldthwait imitates the man who said it, then goes on a tangent that veers into the cliche that people with these sorts of issues are holy fools who can find the delight in a situation that might terrify everyone else.

I wouldn't go so far as to say that this is worse than a routine that straight-up makes fun of people with Down Syndrome. But it's certainly more disappointing, because Goldthwait is a self-interrogating comedian who usually puts more thought into, if not what he says, then at least what he wants to preserve. He keeps going on this subject and sort of turns things around by talking about the time he was in a company of actors with Down Syndrome when he made a statement that brought them all down simultaneously, and one of the actors warned Goldthwait to never do that again. I'm not sure if Goldthwait realizes that the actor he quotes in that anecdote was trying to teach him a lesson, and that the story he told immediately before that one is proof that he wasn't really listening.

It's not a catastrophic misstep. But it does a lot of damage (at least to anybody who knows somebody with those issues, and who is used to them being among one of the last groups that it's OK for standup comedians to make sport of). It makes you start thinking back over the rest of the film, and over the filmmaker's career, and wondering how many of the provocations were thoughtful and challenging, and how many were just a more intellectualized version of the shock comic trying to see what he could get away with. Goldthwait makes it clear in this movie, and in assorted interviews, that he makes movies and does comedy for himself. He doesn't lose sleep over whether anybody likes his work, so this note might not mean anything to him, but I'm offering it here anyway. I've met him. He seems nice. 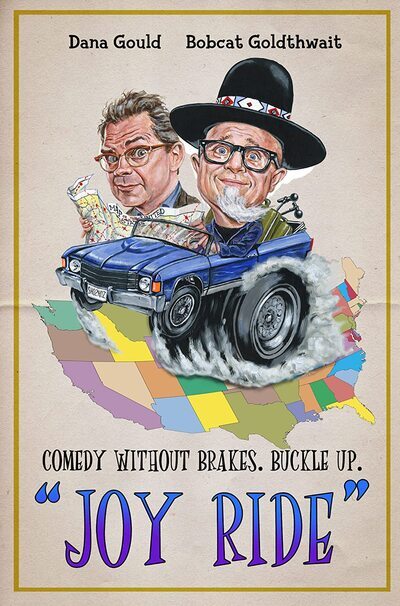 Bobcat Goldthwait as Himself

Dana Gould as Himself