Bobcat Goldthwait makes a daring assault in "World's Greatest Dad" against our yearning to mythologize the dead. But he loses his nerve just before the earth is completely scorched. I have a notion his first draft screenplay might have been unremittingly dark and cynical. It might not have been "commercial." This version may have a better chance. Audiences think they like bleak pessimism, but they expect the plane to pull out of its dive and land safely.

Robin Williams is the star, demonstrating once again that he's sometimes better in drama than comedy. He has that manic side he indulges, and he works better (for me, anyway) when he's grounded. Here he plays Lance, a high school teacher, the divorced father of a loathsome teenager. His son dies by hanging and becomes the object of a cult of veneration and mourning at the school where he was a student and his dad still teaches.

This premise is well-established because of a disturbingly good performance by Daryl Sabara as Kyle, the disgusting son. Kyle is a compulsive masturbator who makes no effort to conceal his pastime from his father. At school, he's a vulgar sexist, insulting girls in the corridors. At all times he is as angry and hostile as he can possibly be, and is genuinely disliked by the student body -- with the sad exception of Andrew (Evan Martin), his "friend" and victim.

Lance comes home to find his son has strangled himself. He has loved the boy despite everything, and now he attempts to rewrite the story of his death. He manufactures misleading evidence for the police to find -- and although he is a failed author with five rejected novels in the drawer, he now finds his perfect genre by forging a diary allegedly left behind by Kyle at his death.

This diary he posts on the Internet, it goes viral at the high school, and the student body is overtaken with remorse about the way Kyle was treated. Soon he becomes the deity of a death cult, led no doubt by "Twilight" fans, and students start wearing his photo. Lance is now seen as a heroic father.

The way this becomes an obsession is possibly the real point of Goldthwait's film. There's nothing like death to stir the herd instinct. For example, yes, Michael Jackson was a creative and talented artist. But was he as venerated a week before his death as he was a week after? Would anyone have foreseen the state funeral? What exactly did it mean when fans staged an all-night vigil at Neverland? Some were motivated by grief, more perhaps by a desire to participate vicariously in fame. Like sports fanatics, they seek identities through the objects of their adulation.

The Kyle cult becomes a tiger that Lance, the hero's father, has to ride. As he passes through the corridors, the path clears before him and a hush falls. He becomes much more interesting to his girlfriend Claire (Alexie Gilmore), a fellow teacher, who had shown alarming signs of growing sweet on Mike (Henry Simmons), a handsome, younger faculty member.

The only character who doubts the story about Kyle's death and his diary is Andrew -- the only one who knew him, and his onanism, at all well. Lance otherwise triumphs as he creates a fake son in place of his real son, and it all leads up to Kyle Clayton Day at the school. It is quite true, as New York Times critic Stephen Holden points out, that the phony death story has brought out the better natures of the survivors. My question is whether Goldthwait, the creator, after all, of "Shakes the Clown," started out with that intention. There is an inexorably black satire somewhere inside "World's Greatest Dad," signaling to be saved. 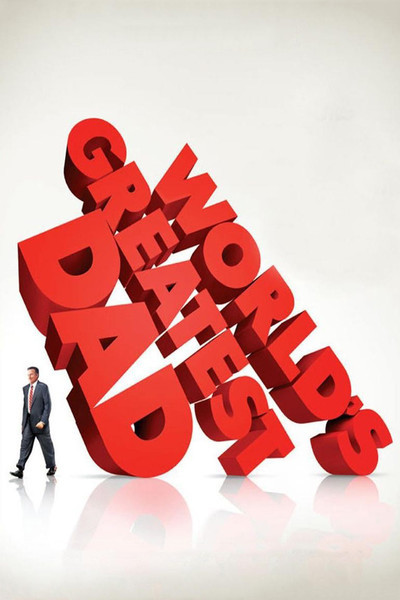 Rated R for language, crude and sexual content, some drug use and disturbing images