Jia Zhangke, A Guy from Fenyang

Walter Salles’ “Jia Zhangke: A Guy from Fenyang,” a documentary about mainland China’s leading contemporary auteur, gets points for a title that stresses the importance of geographic specificity to its subject. When Zhang Yimou, Chen Kaige and other members of the “Fifth Generation” of Chinese filmmakers got their starts in the late 1970s, they usually had been uprooted from their homes by the Cultural Revolution and its aftermath, and were assigned to provincial film studios in distant areas of China. Jia, the foremost director of the Sixth Generation, on the other hand, started out making films in his hometown of Fenyang, and his films have evidenced a strong sense of place ever since.

Salles’ cinematic portrait aptly emphasizes Jia’s roots in Shanxi province. Many of its early scenes follow him as he returns to Fenyang, walks through its streets, looks at its buildings and city walls, and talks with old neighbors and family members; these are intercut with scenes from his early films, often showing the same locales. As pleasingly evocative and warm-spirited as these passages are, they leave far too much unexplained. Why did Jia start out making films in Fenyang rather than through the state film system? How were such independent, or “underground,” films as “Xiao Wu” (1997), “Platform” (2000) and “Unknown Pleasures” (2002) made without state sanction in an autocracy that exercises tight control over its media? Who financed them?

In avoiding these and many similar questions, Salles’ film ultimately comes off not as a serious documentary but rather as the kind of promotional piece used for DVD extras. As such, it will have more appeal for people who know Jia’s work and history and want more of an insight into his personality than for newcomers, who will remain largely in the dark about the reasons for his renown and the cinematic context from which he emerged.

Jia himself comes across as mild-mannered, pleasant and thoughtful, a picture that grows more complex and nuanced when he begins talking about his working methods and we sense a very intelligent, determined artist constantly seeking to challenge himself. In Fenyang, older neighbors recall that he was nicknamed Lailai (Bad Bad) as a kid, and his adult personality still evidences some of that mischievousness and willingness to rebel. At a time when Mao worship was the official religion and all art referred only to “we,” he secretly tuned into Taiwanese radio for songs that spoke of love and “I.”

That memory says a lot about the later importance of pop music in his movies. Salles’ film would have been much better if it looked for more such insights. Indeed, as a mini-biography and account of artistic growth, it contains some amazing blind spots and omissions. We hear nothing, for example, about Jia's place in Chinese cinema, his relationships to or thoughts on his Fifth Generation predecessors or Sixth Generation contemporaries. Entirely unmentioned too is that he was inspired to want to make films by Chen’s “Yellow Earth” (shot by Zhang), or that like these forebears, he attended Beijing Film Academy before returning to Fenyang and starting the films that launched his career.

While it also doesn’t note that “Xiao Wu” brought him a deal with Japanese auteur Takeshi Kitano’s production company, or the general importance of foreign recognition and festival success to his career from early on, “Jia Zhangke: A Guy from Fenyang” does register his dismay that his first three features were banned from theatrical exhibition in China (they did circulate on video). It also shows that his life and work experienced a kind of break after “Unknown Pleasures” when he spent time in places like New York and Paris, then returned to China with a perspective that was more broadly national than locally rooted.

Although it says nothing about why the Chinese authorities chose to support Jia's work rather than ban it thereafter (his formidable international renown at this point surely played a role), Salles’ film offers some illuminating passages when it touches on the making of the films “The World” (2004) and “Still Life” (2006), and talks with collaborators including cinematographer Yu Lik-wai and others, who give detailed descriptions of Jia’s working methods, which allow a lot of room for spontaneity and accidents within a context that obviously reflects a lot of forethought. Jia himself says he only feels anxious when everything seems to going as planned; he thrives on difficulty, disruption, the unexpected.

Another collaborator who offers commentary, the extraordinary actress Zhao Tao describes her first meeting with Jia and offers some thoughts on the role she plays in his unprecedentedly violent “A Touch of Sin” (2103), but she says nothing about their personal relationship or what it feels like to have served as his muse through many films. (This doc was finished two years ago and thus doesn’t include the recent “Mountains May Depart.”)

From the first, Jia has established himself as a realist who looks intently at specific places, people and situations with clear-eyed sympathy but without sentimentality or rhetorical intent. In doing so, he has provided a remarkable chronicle of China as it has been transformed by capitalism, globalization and technology. He has also been an intrepid stylistic innovator, especially in his use of digital cinema. While Salles’ portrait gives a very incomplete account of the man and his art, it pays tribute to a filmmaker who remains among the medium’s foremost and most fascinating creators. 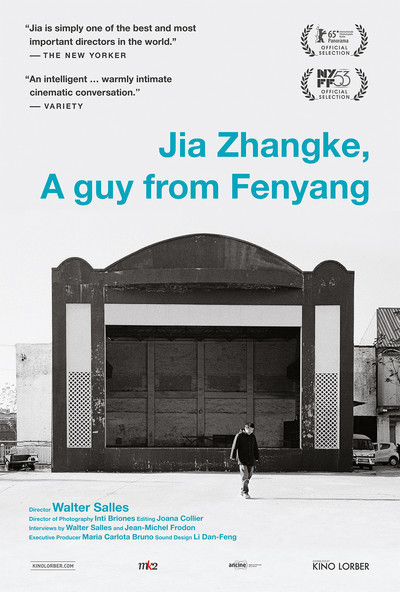 Jia Zhangke as Himself

Hongwei Wang as Himself

Zhao Tao as Herself

Sanming Han as Himself

Nelson Yu Lik-wai as Himself