A Touch of Sin

"May you live in interesting times" is the familiar Chinese saying, usually spat out as a curse. You can see why in "A Touch of Sin," a film by renowned director Jia Zhang-ke. That kind of time is now, in the history of his country. With four vignettes inspired by real-life "ripped from the headline" events, he shows what the great economic expansion of China is doing to the majority of its people. It's not a pretty picture, but it's a compelling one.

The four stories track a furious miner who goes on a rampage against a company head, a migrant worker who returns home for his mom's 70th birthday, a young kid from the provinces who can only find work in an exploitative factory or a brothel, and a massage parlor receptionist (played by Zhao Tao, the director's real-life wife). Jia's view is of a country with corrupt managers and government officials. It also points up the undeniable income disparity topping even that of the U.S. Still, the displaced and marginalized traverse the country, trying to get some piece of the pie. Or some job.

Worse yet, greed has trickled down to everyone. One of the nastiest ironies is that Dahai, the miner played by Jian Wu, gets a tongue-lashing for his idealism by a character reminding him that at least the executive has made it into upper ranks, and out of their village. Dahai tries to fight some injustices, such as the mine owner failing to honor his promise to share some profits with his workers. Nothing doing, though, so when the embezzler visits in his private jet, Dahai goes bonkers with a gun. In perhaps the most memorable sequence, the docile-seeming receptionist (Tao) is set upon by a patron of the "sauna" where she works. He literally beats her up with money trying to force her into another job description: a masseuse/hooker. Finally, she turns the tables, brandishing a knife in a way to best any kung fu master.

Signature strokes of a great filmmaker come through even in a "message" movie. Startling images shot in high definition digital show the old agrarian China smashed up against the new. A horse pulling a cart without a driver goes the wrong way down a highway. Bulls peer placidly at the urban scene. But you have to know a bit about China, which most of us don't, to get that the four stories are set in different parts of this huge country: a cross-section is implied. One is clearly in the north, though, as we can figure from the snow, and characters often chat about where they are from, or guess each other's dialects. It's a world in flux.

Those who follow news in China will catch on to the televised glimpse of an incident involving a high speed train wreck,  a disaster the Chinese government kept on the down-low. That the film is showing these things at all is some sort of minor miracle. Jia's films have been suppressed for number of years, yet he decided to go ahead and try to pass the censors this time (he did). The script for "A Touch of Sin" won best screenwriting award at Cannes this year. His earlier films include "Still Life" which showed an ancient river being wiped out as part of a dam project, and "24 City," a kind of oral history about condo development and the loss of 20,000 jobs.

Those films are calm in tone compared to the explosive "A Touch of Sin," with its wilder-than-the-Wild West beginning as a traveler is set upon by roadside thugs. He's ready for them, vigilante- and Tarantino-style, presaging the steam of rage which erupts into violence throughout the film, sometimes graphically. A mangled ear was too much for a couple audience members at the screening I attended, or maybe they couldn't get into the storylines. There is no segue from one sequence to another, though in fact the movie is tied up in a nearly novelistic fashion, with plot threads coming together cleverly at the end.

If you have the stomach for it, "A Touch of Sin" is a stunning travelogue of cruelty and vengeance. Even if you can't relate to the anthology-like narrative and would have preferred to spend more time with individual characters, the film's glimpses of China today intrigue. Smaller towns now have a neon sheen. The countryside is strewn with humming construction equipment re-making the landscape. Even the brothel where a displaced factory worker (a poignant Luo Lanshan) finds work has its moments. Catch the spectacular march of sex workers in theatrical costumes being paraded before the cash-rich patrons; don't blink or you'll miss a witty cameo with the director as one of them.

None of this may want to make you go to China. "A Touch of Sin" is hardly an invitation to look-see. It does explain some of the contradictory information we've gotten: spectacular wealth and growth, but terrible factory accidents, low wages, and human abuse issues. It's also a kind of plea to the Chinese government. I'm always suspicious of a movie where you have to have a creator's quote to figure things out, but Jia, who was on hand for a Q & A at the screening, had an apt one. "The expansion in China has been so fast," he said, "there's been no room for the system to catch up with any kind of humanity." 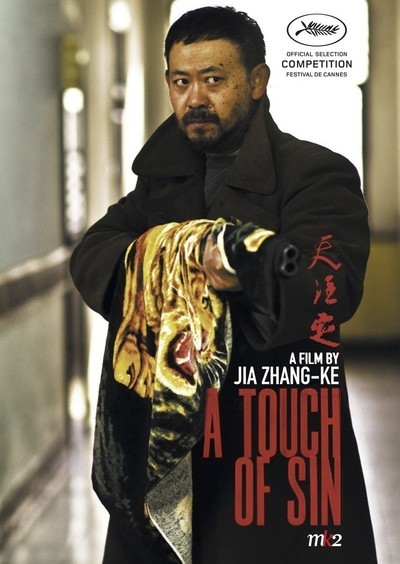