Into the Dark: A Nasty Piece of Work

As I watched Charles Hood’s “A Nasty Piece of Work,” the Christmas installment of the Hulu & Blumhouse series “Into the Dark,” I kept taking notes of other works that I felt inspired this one. Recent echoes of class warfare in films like “Ready or Not” and “Parasite” are almost certainly coincidental (or, more accurately, a commentary on where we are in 2019 as a culture), but “Who’s Afraid of Virginia Woolf?,” “Cheap Thrills,” “The Game,” and even “National Lampoon’s Christmas Vacation” could be actual inspirations. If you’re thinking that a movie that throws all of these good-to-great movies in a blender and hits puree sounds pretty fun, you’re not wrong. For the second month in a row, season two of “Into the Dark” has produced a clever, surprising entry—a sharp, funny, vicious little movie that zips by in under 80 minutes and never drags. Gather the family and watch a different kind of holiday comedy this year.

Julian Sands plays Steven Essex, the CEO of a major corporation and a total prick. In the vein of characters like Kevin Spacey’s from “Swimming with Sharks,” Essex is the kind of monster who forces his underlings to work late, berates them constantly, and then tells them at the last minute that there will be no Christmas bonuses this year. Ted (Kyle Howard) works for the awful Essex, and has just about had it, as evidenced by the opening scene in which he smashes the bathroom mirror with the boss’ overpriced golf clubs. And then Essex throws him what appears to be a life preserver. There won’t be bonuses, but there may be a new position created. He wants Ted and his wife Tatum (Angela Sarafyan) to come to his mansion that night for a gathering.

When Ted arrives, expecting a party, he’s stunned to discover that the only other couple there is his office rival Gavin (Dustin Milligan) and his wife Missy (Natalie Hall). Gavin is everything Ted is not—grotesquely eager to step on those around him to climb the corporate ladder. And Missy is the anti-Tatum, obsessed with her looks and the toys of the good life more than anything of real value. Rounding out this evening of entertainment is Steve’s tempestuous wife Kiwi (Molly Hagan), the Lady Macbeth who seems to enjoy pushing the buttons of her husband’s employees more than her husband. Soon, the two couples will learn that tonight’s event is more than a party or a discussion—there’s one position and two employees. How far would you go for a life-changing job?

A lot of the “Into the Dark” films have been single-setting affairs—it keeps the budget low—but this is one of the best yet in terms of use of space. Hood uses the Essex mansion brilliantly, keeping its secrets hidden and utilizing its opulence almost as a weapon. Of course, the Essexes would develop insane games to keep themselves entertained—when you have everything, you have to get creative. There’s also a fascinating subtext about how far people go in the real world to get ahead. Without spoiling anything, there are moments when Ted and Gavin have to face covering up serious crimes. Before asking yourself if that stretches believability, consider how many executives have covered up corporate crimes to protect their paychecks. And yet Hood and his writer Paul Soter never let the commentary on economic inequality or corporate malfeasance dominate the film. It’s just a rich subtext that adds to the overall enjoyment.

What’s most refreshing about “A Nasty Piece of Work” is how much it reflects a director who knows how to bring rich genre performances out of his cast. As he did with the screwball performances in “Night Owls,” Hood gets his ensemble to commit to the insanity. If any part of this had been too self-conscious or cynical, it wouldn’t have worked. There’s not a weak link in the cast, and the main six all seem to be exactly on the same page in terms of tone, which cannot be understated in terms of the film's overall effectiveness. If we didn’t buy the situation that Ted, Gavin, Tatum, and Missy find themselves in—or the mentally unhinged dynamic of the Essexes—this whole affair would have collapsed.

The second year of “Into the Dark” is only three chapters old, but it’s already produced two very solid entries in last month’s “Pilgrim” and now this month’s gnarly Christmas tale. There will be a time this holiday season when you need a break from the sweetness of things like “Elf” and “It’s a Wonderful Life.” Why not show your family something new? Or maybe your boss? 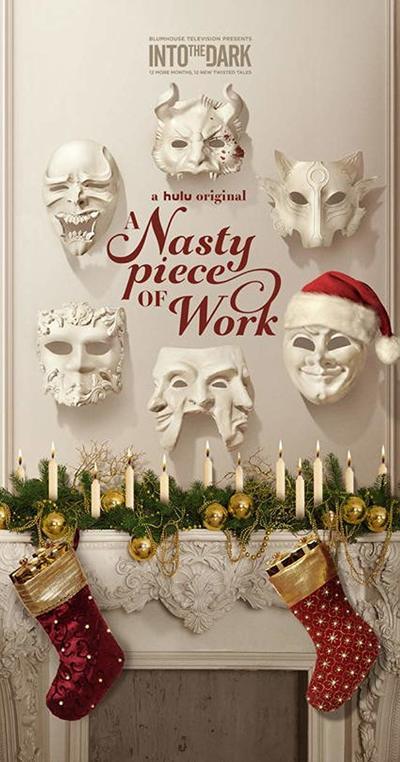