It’s so clichéd at this point in the critical conversation during the hot take season of festivals to say, “You’ve never seen a movie quite like X.” Such a statement has become overused to such a degree that it’s impossible to be taken seriously, like how too many major new movies are gifted the m-word: masterpiece. So how do critics convey when a film truly is unexpectedly, brilliantly unpredictable in ways that feel revelatory? And what do we do when we see an actual “masterpiece” in this era of critics crying wolf? Especially one with so many twists and turns that the best writing about it will be long after spoiler warnings aren’t needed? I’ll do my best because Bong Joon-ho’s “Parasite” is unquestionably one of the best films of the year. Just trust me on this one.

Bong has made several films about class (including "Snowpiercer" and "Okja"), but “Parasite” may be his most daring examination of the structural inequity that has come to define the world. It is a tonal juggling act that first feels like a satire—a comedy of manners that bounces a group of lovable con artists off a very wealthy family of awkward eccentrics. And then Bong takes a hard right turn that asks us what we’re watching and sends us hurtling to bloodshed. Can the poor really just step into the world of the rich? The second half of “Parasite” is one of the most daring things I’ve seen in years narratively. The film constantly threatens to come apart—to take one convoluted turn too many in ways that sink the project—but Bong holds it all together, and the result is breathtaking.

Kim Ki-woo (Choi Woo-sik) and his family live on the edge of poverty. They fold pizza boxes for a delivery company to make some cash, steal wi-fi from the coffee shop nearby, and leave the windows open when the neighborhood is being fumigated to deal with their own infestation. Kim Ki-woo’s life changes when a friend offers to recommend him as an English tutor for a girl he’s been working with as the friend has to go out of the country for a while. The friend is in love with the young girl and doesn’t want another tutor “slavering” over her. Why he trusts Kim Ki-woo given what we know and learn about him is a valid question.

The young man changes his name to Kevin and begins tutoring Park Da-hye (Jung Ziso), who immediately falls for him, of course. Kevin has a much deeper plan. He’s going to get his whole family into this house. He quickly convinces the mother Yeon-kyo, the excellent Jo Yeo-jeong, that the son of the house needs an art tutor, which allows Kevin’s sister “Jessica” (Park So-dam) to enter the picture. Before long, mom and dad are in the Park house too, and it seems like everything is going perfectly for the Kim family. The Parks seem to be happy too. And then everything changes.

The script for “Parasite” will get a ton of attention as it’s one of those clever twisting and turning tales for which the screenwriter gets the most credit (Bong and Han Jin-won, in this case), but this is very much an exercise in visual language that reaffirms Bong as a master. Working with the incredible cinematographer Kyung-pyo Hong (“Burning,” “Snowpiercer”) and an A-list design team, Bong's film is captivating with every single composition. The clean, empty spaces of the Park home contrasted against the tight quarters of the Kim living arrangement isn’t just symbolic, it’s visually stimulating without ever calling attention to itself. And there’s a reason the Kim apartment is halfway underground—they’re caught between worlds, stuck in the growing chasm between the haves and the have nots.

"Parasite" is a marvelously entertaining film in terms of narrative, but there’s also so much going on underneath about how the rich use the poor to survive in ways that I can’t completely spoil here (the best writing about this movie will likely come after it’s released). Suffice to say, the wealthy in any country survive on the labor of the poor, whether it’s the housekeepers, tutors, and drivers they employ, or something much darker. Kim's family will be reminded of that chasm and the cruelty of inequity in ways you couldn’t possibly predict.

The social commentary of "Parasite" leads to chaos, but it never feels like a didactic message movie. It is somehow, and I’m still not even really sure how, both joyous and depressing at the same time. Stick with me here. "Parasite" is so perfectly calibrated that there’s joy to be had in just experiencing every confident frame of it, but then that’s tempered by thinking about what Bong is unpacking here and saying about society, especially with the perfect, absolutely haunting final scenes. It’s a conversation starter in ways we only get a few times a year, and further reminder that Bong Joon-ho is one of the best filmmakers working today. You’ve never seen a movie quite like “Parasite.” Dammit. I tried to avoid it. This time it's true.

This review was filed from the Toronto International Film Festival on September 7th. 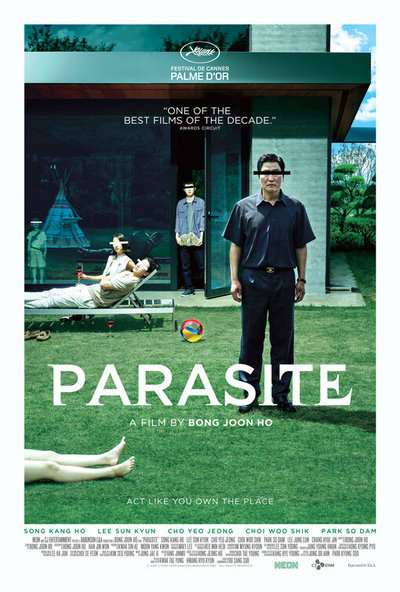