On August 10th, Universal Pictures cancelled the release of the Blumhouse production “The Hunt,” directed by Craig Zobel. The script for the film, about rich people who hunt poor people for sport, leaked and Trump supporters missed its subtext, calling it an invitation for blue state liberals to come after conservatives with guns. The problems with this are too numerous to explain in the preface to a film review but suffice it to say Universal made a bad call. By keeping the film from the public they’ve left it to our imagination exactly how anti-Trump the film is or isn’t. What they’ve also done is set a dangerous precedent. If Republicans decide a movie is unfair (and a goodly sum of major studio product is politically to the left by default these days) all The President need do is tweet about it and that film will be shelved. We can all be grateful then that no one had a hard look at “Ready Or Not,” a film implicitly as radical as "The Hunt." Which is to say neither film is going to change the way anyone votes, but they both posit a game in which the rich hunt the poor. “Ready or Not” doesn’t wear its anti-capitalist bias proudly but you’d have to be blind to miss it.

Grace (Samara Weaving) loves Alex Le Domas (Mark O’Brien) so much that she’s tolerated the hoops through which his family have made her jump: Alcoholic wastrel Daniel (Adam Brody) hitting on her, mother Becky (Andie MacDowell) being somewhat cagey about her approval, sister Emilie (Melanie Scrofano) not even showing up in time for the ceremony, father Tony (Henry Czerny) outright voicing his displeasure at the girl’s status and aunt Helene (Nicky Guadagni) staring daggers at her from the moment they met. They’re a bizarre bunch but Grace sees the light at the end of the tunnel now that they’ve all congregated at the Le Domas manor for the nuptials. With the ceremony out of the way, Grace starts to relax, but then Aunt Helene shows up unannounced in Alex’s bedroom to remind him that there’s one more ritual before the two can live happily ever after. Alex neglected to mention that every time someone enters the Le Domas dominion, they have to play a game.

The Le Domas family name is in the world of the film, meant to be as ubiquitous as Parker Brothers or Milton Bradley. They’re world renowned for their board and card games, so Grace takes the little moonlit challenge as a quirk because of their chosen industry. However when Tony explains the origin of the family fortune, how it was only after Great Grandfather Le Domas had chance encounter with a traveler that he made his millions, and Grace pulls "Hide And Seek" from the box of games, the entire family has a collective intake of breath and it’s clear something is off. Grace hides in a dumbwaiter for as long as she cares to, missing the sight of the entire Le Domas family arming themselves to the teeth before they begin to look for her. It’s only when Emilie accidentally kills one of the family’s three maids that Grace fully understands that this isn’t just a game.

It can be easy to overstate the case of a movie like “Ready or Not.” It’s replete with ‘badass’ images of Grace in her wedding dress wearing post-"Kill Bill" swagger heading to do battle with the batty Le Domas progeny, covered in blood, sporting a bandolier, a half-baked quip, and a ripped wedding dress. It’s filled with easy jokes about the insanity of the rich and the callousness with which they take to their task of hunting and killing a woman on the grounds of their mansion. It’s got cavalier work from Brody, MacDowell (who struggles a little with the tone), and Kristian Bruun as Emeilie’s jackass husband, but they should all be funnier and they should all have been given a little more to chew. Czerny and Weaving are the only ones who fully seize every second of their screen time, showcasing the full bodied comedy and crazy eyed horror this might have been.

At its heart, this film cries out to be The Most Dangerous Game by way of “Schitt’s Creek,” but it doesn’t appear to know what it takes to be a satire. It knows the sight of rich people with medieval weaponry hunting a woman means “something” but they haven’t worked out the details. “The ammunition’s just for show,” says a butler to Weaving as she points a gun at him midway through the carnage. The same is true of the film’s political machinery. “Ready or Not” quite plainly didn’t ask to be the other movie about human beings hunting each other for sport, but as Wesley Morris once wrote, a moment picks a movie more than the reverse. It’s quite plainly in Weaving’s corner, but it doesn’t have much to offer her. Even the final line has a kind of cheap seats Joe Eszterhas anti-poetry that has nothing to do with the conflict and is more about scoring a laugh as the audience heads to the parking lot.

On a technical level, the digital photography is too murky to become the fake Lars von Trier movie that directors Matt Bettinelli-Olpin and Tyler Gillett (who also go by the name Radio Silence) appear to be aiming for. MacDowell in particular is betrayed by the harsh light and muddled photography. She’s one of the most radiant women in the American cinema and is treated to harsh lighting and garish post-production colorization, to say nothing of an unflattering hairstyle. A little confidence in and respect for a game cast would have gone a long way.

However, and it’s a big however, the film is charismatic and thrilling enough to bypass its shortcomings. Weaving makes for a very likable hero, with a broad comedic appeal, an every-girl clumsiness and sarcastic rejoinder for everything. In a better world, she’d be headlining comedies already. She makes for a likable action hero precisely because she knows and shows that the clothes don’t fit her. In her tattered wedding dress, she fights for her life against everyone from her young nephews to the butler. Every wound she receive shows her that the backwards morality by which the rich live is so deeply ingrained that no amount of pleading could right the course. It’s also her first clue that not even her beloved Alex will be able to get her out of this jam. She’s not just fighting people, she’s fighting tradition and the idea of family.

Weaving’s expressiveness lends her plight instant pathos and Brody, who’s been one of America’s best character actors for over a decade, slowly pulling back from the rest of the clan, plays nicely against the bug-eyed fervor of the rest of the Le Domas’ brood. By the time the games come to an end, “Ready or Not" has ceased to be about the rich and the poor. It’s about a girl trying to survive a violent ordeal, which is potent enough for the moment you’re watching the film, but in a climate in which politics can pull a film from a release schedule, now is not the time to hide. 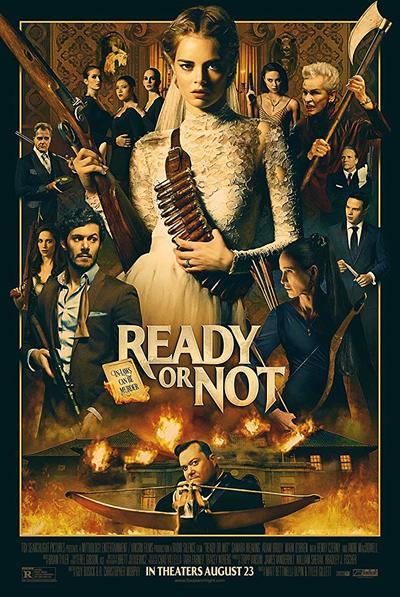 Rated R for violence, bloody images, language throughout, and some drug use.