"Cheap Thrills" is a movie that Rod Serling would have loved. Driven by a stellar everyman performance by the always-great Pat Healy, E.L. Katz's darkly comic thriller plays that oh-so-common "Twilight Zone" game of putting an average protagonist in an extreme situation and asking the viewer to wonder what they would do in his shoes. It's a smart, fun, twisted little festival hit which has already garnered quite a vocal fan base through On Demand viewing. I wish the final act was a bit darker and that it took the black comedy tone of the first half of the film and turned it into something more of the horror genre, but this is a solid thrill ride all around, especially for those who like their Faustian parables with a bit of the bloody red stuff.

Craig (Healy) is in one of life's deeper valleys. He's just been fired, about to be evicted, and has a young child. One fateful night, he runs into an old friend at a bar. He hasn't seen Vince (Ethan Embry) in a half-decade and while Craig has settled down, his old acquaintance seems a bit more instinctive, careless, and potentially violent. The "odd couple" dynamic between the two will matter greatly to their journey this fateful night.

Craig and Vince aren't alone in this dive bar. The gregarious Colin (David Koechner) and mopey Violet (Sara Paxton) invite them over for a drink. After noting that they're splitting hundred dollar bills based on exactly how a bar patron sexualizes his drink pourer, the games begin. Colin throws out that he'll pay $50 to the first guy to do the shot in front of them. Vince doesn't think twice, slamming it down. It's just the beginning. You see, it's Violet's birthday and this is how rich sociopaths have fun: playing off the desperation of those with only a fraction of their cash flow. $200 to get the girl at the bar to slap you. $500 to hit a bouncer. Of course, the stakes and the payouts increase after the quartet ends up at Colin's house and the sharp instruments come out.

The main element that separates "Cheap Thrills" from similar tales of how far we're willing to go to provide for our families is the brilliant move on the part of screenwriters Trent Haaga and David Chirchirillo to give Craig competition other than his own conscience. Men behave differently when they think someone else, especially an old acquaintance who they like to think they have out-achieved in life, may take what's theirs. It's not just turning down the money Colin is offering but realizing that doing so means it could go to the guy standing next to you. And so there's often little time to think about the consequences. It's not just "Will you do this?" It's "Will you do this before someone else takes away your chance to do so?" It adds a layer of social commentary and gives the entire film adrenaline as if the next challenge could be accepted before either man has had a chance to even think about it. The difference in social type between Craig and Vince adds a fresh dynamic as well. Vince has a violent streak and Craig has a desperate one. Which will be their undoing?

It helps to have a natural performer like Healy in the lead role. He never oversells Craig's desperation, allowing it to clearly influence his actions but never steal focus. Embry is solid throughout but Koechner threatens to steal the piece in its showiest role. He's never been better, turning up the volume on that streak of malevolence that he often brings to even comedic parts like his character in the "Anchorman" films. Koechner has always seemed a bit off and he uses that amply here. At his best, he seems honestly dangerous and yet remains friendly enough to believe that our heroes would stay in his spider's web.

I wish there was a bit more follow through on those hints of honest danger. "Cheap Thrills" takes a very dark turn at about the 50 minute that I won't spoil and I thought to myself how are Katz and his writers going to work their way out of this one? They do so a little too neatly for my tastes, kind of winking at the audience as things get truly crazy instead of just allowing the comedy-thriller to naturally become more of the latter. It's a minor complaint for a very enjoyable cautionary tale about the perils of doing anything for a buck. Serling would be proud. 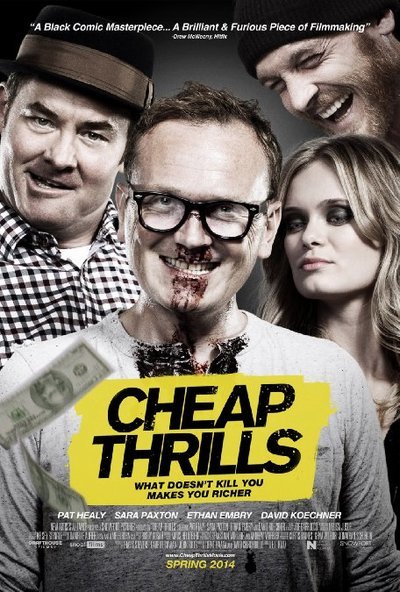