Blumhouse Productions is a filmmaking entity that first hit it big in 2009 with the release of “Paranormal Activity,” the out-of-nowhere horror hit that tapped into our inexplicable appetite for watching camcorder footage of two oafs being spooked by weird noises in their suburban home. Flush from the success of that film and its inevitable string of sequels, the company began an ambitious program of cranking out a large number of low-budget genre items in the hopes of hitting it big again, and found success with the likes of “The Gift,” “The Visit” and the “Purge” and “Insidious” franchises. However, there have been a number of failures as well (“The Green Inferno” and “The Darkness”), many Blumhouse films not even deemed worthy of a theatrical release and instead went straight-to-video.

Having seen a number of those films, I can easily understand why they were deemed unworthy of getting an actual theatrical distribution. But what I can't begin to fathom is why they decided that their latest effort, the dunderheaded demonic possession saga “Incarnate,” deserved just such a release. This film seems to have been designed to defeat even the most meager expectations one might have towards a cheapo “Exorcist” knockoff, released on one of the slowest moviegoing weekends of the year and with barely any warning.

That said, you don’t want to mention the “E” word around Dr. Seth Ember (Aaron Eckhart). While he has the power to rid people who are possessed by demons, he disdains organized religion as a whole and instead refers to what he does as, if I recall correctly, the eviction of parasitical entities. With the aid of his two hipster assistants, he accomplishes this by lowering his heart rate so he can be as close to death as possible. From that point, he can enter the possessee’s subconscious dream state and convince them that what think they are experiencing is all a lie. He is driven to do all of this in the hopes of one day tracking down and destroying one especially all-powerful demon, known to him as Maggie, who caused the car accident that killed his wife and son and left him in a wheelchair. To be fair, I am probably not explaining this very well but to be honest, neither does the movie.

One day, a representative from the Vatican (Catalina Sandino Moreno) shows up with a suitcase full of money in order to buy his help. An 11-year-old boy (David Mazouz) who has been possessed by a demon and will die in roughly three days otherwise. At first, Ember isn’t interested at all but when she mentions that the demon in question may in fact be the elusive Maggie, he eventually agrees in the hopes that he can get his revenge. While the Vatican observer and the boy’s mother (Carice van Houten) look on, Ember and his team begin their work and the early rounds are all with Maggie—his first contact is a total failure and his attempt to break Maggie’s hold by bringing in the kid’s drunken, abusive and estranged father likewise does not go off quite as planned (unless the plan was to kill off an otherwise completely disposable character to create the illusion that something of interest has happened). Luckily, for his final confrontation with Maggie, Ember has something up his sleeve—a serum derived from the blood of another possessed person that will provide just enough clarity within the dream world to help him somehow defeat the demon once and for all.

Although the screenplay by Ronnie Christensen steals material from any number of sources, the most obvious inspiration for “Incarnate” is, of course, the “Exorcist” films. You can’t really blame director Brad Peyton (the auteur of the equally ludicrous “San Andreas”), as countless movies have been doing that for the last 40-odd years or so. But based on the evidence presented here, it appears to be the first time someone has tried to do that after only watching the one Renny Harlin directed. Although the MPAA rating promises “intense sequences of horror violence, terror and disturbing images” (though at resolutely PG-13 levels), you would be hard-pressed to find any of those elements on display. Then again, one would be hard-pressed to find much of anything thanks to a dreadful lighting scheme that reduces virtually everything to a murky mess, which is not helped by the script simplifying most of the action to a single dingy room. Speaking of murky, the story is a jumble in which everyone speaks in purely expository sentences that nevertheless fail to explain any of what is going on, the characters are total bores (even the ones currently being possessed) and the scares are completely nonexistent.

“Incarnate” is such a pointless bit of hackwork that it almost makes the recent horror dud “Shut In” seem focused by comparison. Frankly, the only scary thing about it is that actors as talented as Eckhart, van Houten (who has shown her talents in such projects as “Black Book” and “Game of Thrones”) and Moreno (who was so good in “Maria Full of Grace”) apparently had no better offers on the table when they signed on. Even if that were the case, it is so bereft of anything of interest for them to do that you still have to ask yourself why they would still agree to waste their time on it. Hopefully the next time they are getting ready to read a script for a potential project (since “Incarnate 2” is probably not going to exist), they'll have popped in enough of that clarity-inducing serum to avoid getting stuck in such garbage in the future. 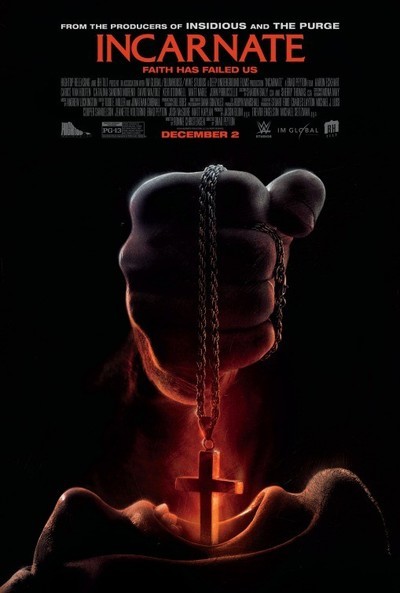