Most bad horror films offer viewers long stretches of screen time where nothing much happens, which are then occasionally punctuated by brief moments of bloody mayhem deployed to keep viewers vaguely interested in the proceedings. “The Darkness,” on the other hand, is a horror film made up of long stretches of time in which nothing much of anything happens, and is only occasionally punctuated by brief bursts of pure, concentrated boredom. There are times when it feels as if the producers challenged themselves to see how little it needed and still meet the legal definition of a movie.

As the film opens, the seemingly happy Taylor family—dad Peter (Kevin Bacon), mom Bronny (Radha Mitchell), older teen daughter Stephanie (Lucy Fry) and younger son Michael (David Mazouz)—are camping in the Grand Canyon with another couple, the Carters (Matt Walsh and Jennifer Morrison). While hiking with his sister and the Carter's son Andrew, Michael, who is autistic, is left alone for a few minutes and crashes through the ground into a hidden underground cavern. He discovers five mysterious stones belonging to the ancient Native American Anasazi tribe, which are used to keep a quintet of vicious demons at bay. Next thing we know, Michael has somehow gotten out of the cavern without anyone realizing what happened to him and before long, the two families leave—the Carter clan take off and are never seen or referred to again but alas, we get stuck going home with the Taylors.

The Taylors, it should be noted, are not an especially happy bunch—Stephanie is bulimic, Bronny is struggling with a drinking problem, Peter has strayed from his marriage in the past and is contemplating doing so again with a new intern at his architecture firm and they are collectively frazzled by the demands of Michael’s condition—and things get progressively worse for them when it turns that Michael, unbeknownst to them, has taken the stones. Soon the house is filled with bizarre odors, faucets and televisions begin turning themselves on and off, locked doors mysteriously open on their own and Michael begins displaying a whole range of discomfiting behavior ranging from having a new invisible friend named Jenny to setting fire to a wall in his room. Although it takes the rest of the family an extraordinarily long time to catch on that something is up, they finally begin to realize that dark forces are at work and call in a couple of Native American spirit cleansers to help them before it is too late.

“The Darkness” was co-written and directed by Greg Mclean, an Australian filmmaker who made a splash a decade ago with “Wolf Creek,” an exceptionally nasty exercise in sadism about a seemingly friendly guy in the Outback who tortures and brutally murders a trio of backpackers that was, it is said, supposedly inspired by a real-life incident. According to the film’s Wikipedia page, “The Darkness” was also purportedly based on actual events but in fact, it pinches elements from so many sources, ranging from the expected likes of “Poltergeist” and the M. Night Shyamalan catalogue, to a couple of famous “Brady Bunch” episodes involving haunted tiki idols and trips to the Grand Canyon, to the immortal Ben Murphy vehicle “Time Walker” (known to MST3K fanatics as “Being from Another Planet”) that to list them all would result in a review longer than one for the latest Terrence Malick joint. Perhaps all of these borrowings were designed to distract audiences from discovering that the scares are nonexistent and the more dramatic elements go absolutely nowhere, with the autism subplot coming across as exceptionally questionable from a taste perspective.

Although I have no way of knowing it for sure, “The Darkness” has all the hallmarks of a film that was greatly tampered with in post-production—characters are introduced only to completely disappear, plot developments are brought up and summarily dismissed and the whole thing moves along with a choppiness that suggests a lot of additional footage was shot and then either cut out at the last second or never employed. That would certainly explain why good actors like Bacon and Mitchell would sign on for something so ridiculous. It would also explain why Mclean’s work displays absolutely none of the cinematic style that made “Wolf Creek” more memorable than it had any right to be. Here, the only scares he is able to deliver are of the “BOO!” variety in which someone or something pops up out of nowhere, accompanied by a sudden blast of music. While this particular approach to scaring viewers can be sensationally effective when used properly (as was the case with “The Conjuring”), it gets really old, really quickly here.

“The Darkness” is pretty much a total bust—it isn’t scary, it isn’t exciting and it plods along at such a snails pace that even though it clocks in at just over 90 minutes, it plays like it runs at least twice that. That said, there are a couple of things about it that amused me to a certain degree. For one, we learn that those haunted by the stones will be visited by the animals representing the five spirits at unrest—a crow, a dog, a snake, a wolf and a buffalo—and since the first four all pop up, I found myself on the edge of my seat waiting for the buffalo to finally turn up. Then there is the odd appearance by none other than Paul Reiser as Kevin Bacon’s boss, a casting decision that makes this film, of all things, a partial reunion of the cast of that great film “Diner.” Trust me, not only is that an infinitely better movie than “The Darkness," it is an infinitely scarier one in comparison. 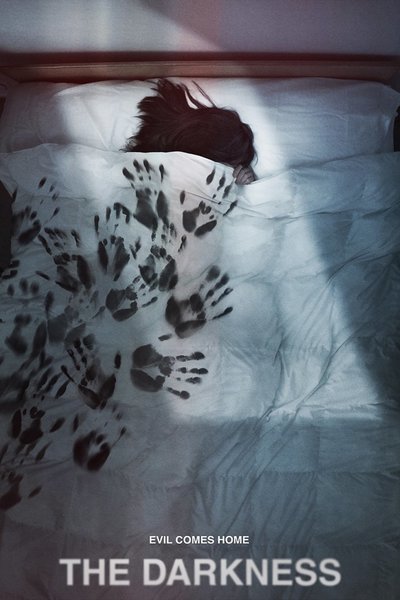