Controversial filmmaker Eli Roth ("Hostel," "Cabin Fever") has finally made a film with squirm-inducing skills that match its provocative payload. Roth's homage to notorious Italian films like "Cannibal Holocaust" is a nasty piece of work with a mean spirit that is tempered by believable sympathy with naive protagonist Justine (Lorenza Izzo), a college freshman who travels to Peru with a student activist group after she becomes traumatized by a college lecture on female genital mutilation. Because Roth is an existential misanthrope, Justine faces the worst nightmare of any privileged white protagonist with unexamined racism in their hearts: an inhuman tribe of flesh-eating cannibals who behead, gouge, impale, drug and devour any outsiders unfortunate enough to cross their paths. "The Green Inferno" is, in that sense, not so much a knock against Occupy Wall-Street-style slacktivists (though it is also that) so much as it's an accomplished, mean-spirited horror film about a heroine who is too young to understand the motives for her do-gooder idealism.

From the start, Justine is asked—by her even-tempered diplomat father Charles (Richard Burgi) and bitchy romantic rival Kara (Ignacia Allamand)—why she's joining a mission to stop the destruction of an indigenous Peruvian tribe's ancestral home. Justine has immediately superficial reasons: she's attracted to student leader Alejandro (Ariel Levy), a dickishly self-serious leader who initially asks Justine to leave his group when she mockingly raises doubts about his methods' efficacy. Still, Justine makes her way back into Alejandro's good graces in a scene that complicates her horny-for-teacher motives: Justine challenges Alejandro, and says that maybe his group might have a greater impact if he were more inclusive.

That call to inclusivity is ironic given that this is an Eli Roth film. Roth mocks Justine's peers before circumstantial peril humanizes them (mostly; more on this in a moment). These kids want to smoke weed, they lead with their alternative lifestyle (Veganism is wacky!), and are deeply hormonal. They are, in other words, the perfect examples of the American exceptionalism that Roth mocked in "Hostel," only this time they're too young, dumb and full of bad ideas to be treated like real bad guys. Still, there is an element of you-get-what-you-give moralism to the blood-soaked massacre that ensues after Alejandro's group's plane experiences engine failure and crash-lands in the midst of a people-eating Peruvian tribe.

The violence in these scenes is intense. It's technically not gratuitous however because the extreme nature of Roth's film is its primary reason to exist. Still, with that in mind, it's interesting to see how Roth's fanboyish impulse to top "Cannibal Holocaust" director Ruggero Deodato and his Italian contemporaries winds up inadvertently revealing the relatively humanizing aspects of "The Green Inferno" as a cultural critique. If you buy into Roth's film, these cannibals are the worst nightmare of girls like Justine, a character who stubbornly has to convince herself that she knows what she's doing when she follows her impulse to translate her revulsion with genital mutilation into progressive political action.

But as with the protagonists of any halfway decent post-"Texas Chainsaw Massacre" horror film, the humanity of Justine's peers kick in along with their survival instinct. They cannot reason with a seemingly uncivilized third world group whose physical appearance—bones through their noses, red dye covering their skin, and loin cloths over their extremities—immediately broadcasts their alien nature. So it stands to reason that violence is extreme, and copious throughout "The Green Inferno." Roth defines his characters based on what he knows they're not: smart or introspective enough to be wise beyond their years, and certainly not emotionally hardy enough to know how their bodies react under extreme stress. So, because selfishness and naiveté are universal constants in Roth's cynical world, the natives of "The Green Inferno" must be lopsidedly sadistic.

"The Green Inferno" is accordingly at its best when it's a horror film that thinks it's a satire, and not a satire that acts like a horror film. There are a couple of notable missteps, particularly in the scene where blonde vegan Amy (Kirby Bliss Blanton) has diarrhea. The scene is presented as an unnerving, even surreal moment in an already unbelievable, intolerable situation. But the sound effects guy was clearly instructed to go to town, and he winds up giving short shrift to one of the film's most believably pathetic characters. Thankfully, while one might wonder what value a horror film that uses savage tribesmen stereotypes, Roth's film does represent anti-heroic Justine and her peers through a lens that is both critical and human enough. "The Green Inferno" is not exactly a feel-good film, but it gets a very particular job done. 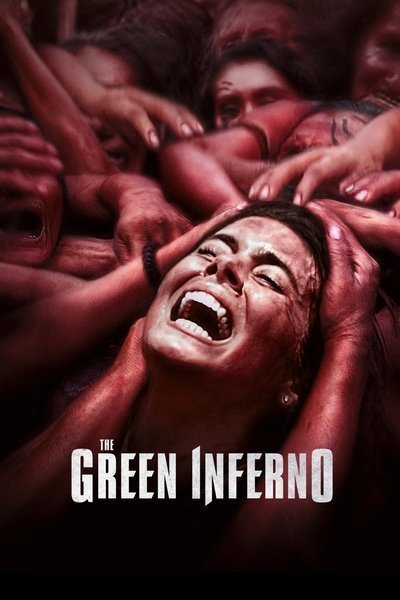