“Shut In” feels like an attempt to follow in the precise footsteps of M. Night Shyamalan, as made by people whose knowledge of his oeuvre is based only upon everything from the last ten minutes of “Signs” on. It is a thriller that starts off at a molasses-like pace and spends the next hour or so meandering around while telling a story consisting of elements borrowed wholesale from other, better sources before arriving at the kind of “shocking” final twist that is so ludicrously conceived and executed that you wonder how the filmmakers ever expected to get away with it. Frankly, the most surprising thing about the entire enterprise is that the wonderful actress Naomi Watts was somehow roped into starring in it, despite offering nothing of value for someone of her talents except a paycheck.

Watts plays Mary Portman, a child psychologist who lives and works in a remote corner of rural Maine. As the story opens, a horrible car crash has killed her husband and left 18-year-old stepson Stephen (Charlie Heaton of “Stranger Things”) paralyzed from the neck down and unable to communicate. Six months later, Mary is caring for Stephen at home by herself, and, while she loves him, the pressure is clearly getting to her. Her Skype sessions with another shrink (Oliver Platt) are not helping. One night, one of her more troubled patients, a young deaf boy named Tom (Jacob Tremblay from “Room”) turns up on her doorstep. Before she can do much of anything, he just as quickly takes off into the frigid evening again and cannot be found. A search for Tom goes on in earnest, and Mary is crushed with guilt over what has happened until strange things begin happening around the house. While her psychiatrist friend suggests that she is suffering from the effects of parasomnia as the result of what has happened with both Stephen and Tom, she is convinced that something else entirely is going on. Good thing that a raging ice storm is bearing down on where she lives because absolutely nothing strange or bizarre would possibly happen when she was cut off from the outside world, right?

The concept of “Shut In” is promising, I suppose, but the execution here is pretty much a total botch from start to finish. Watching the story unfold, you get the sense that first-time screenwriter Christina Hodson came up with the big final twist first and then decided to work backwards to construct a narrative that would fit it. There are two key problems with that approach. First, the big twist is so ridiculous that viewers will more likely find themselves laughing at its sheer silliness than reeling from its dramatic rug-pulling. (Suffice it to say, it almost makes the big twist in “The Boy” seem staid and logical by comparison.) Second, the story leading up to that less-than-spectacular reveal is a heavy-handed drag that spends more time blatantly ripping off elements from Stanley Kubrick’s take on “The Shining” than in trying to create a compelling story of its own. To make matters worse, director Farren Blackburn (a veteran of such TV shows as “Doctor Who” and “Daredevil”) directs everything at such a poky tempo that it feels twice as long as its 90-minute running time and proves incapable of delivering a scare that doesn’t rely solely on people suddenly popping up out of nowhere. Believe me, in this case, that gets really tiresome after a while.

Which brings us back to the inexplicable presence of Naomi Watts, an actress I have admired ever since I saw her for the first time as the spunky sidekick in the long-forgotten “Tank Girl” and whose work in “Mulholland Drive” is one of the best screen performances that I've ever seen. She has been in a lot of movies, some very good, some very bad but few which have given her as little to work with as this one does. She offers it her all, to be sure, but is incapable of overcoming the inanities of a screenplay so beneath her that there are times when it seems to be going out of her way to embarrass her—in one especially mortifying moment, we get to see one of the best actresses around kneeling in front of a toilet naked while chugging baby shampoo in order to help her induce vomiting. (Yes, it all makes sense in context, I suppose, but still ...)

By happenstance, there is another relatively unheralded horror film coming out today, “The Monster,” that also deals to some degree with testy parent-child relations, physical and emotional isolation, guilt, auto accidents and things going bump in the night. Now, that film is hardly perfect by a long shot—it strives a little too much to be seen as metaphorical and the monster is just a little too cheesy-looking at times for its own good—but it at least has the decency to offer viewers a story that resonates beyond the “Boo!” moments, a couple of excellent performances from its two leads and a couple of genuinely effective scares here and there. “Shut In,” on the other hand, is the kind of lazy genre hackwork that will inspire more yawns than screams—at least until the final reels, when the sounds of incredulous laughter will no doubt take over. 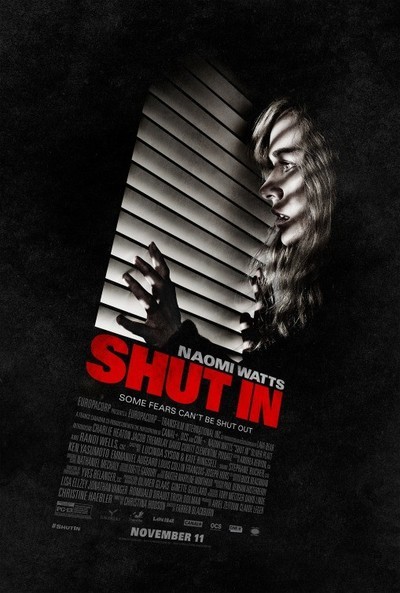