Since the nascent days of the pandemic, there have been several high-profile Covid-19 documentaries: “76 Days,” “Totally Under Control,” “The Last Cruise,” etc. None have been like Nanfu Wang’s “In the Same Breath.” Her previous film, “One Child Nation,” a personal critique of China’s one-child policy, first introduced her unique ability to work around a government censorship in order to deliver truthful, powerful stories. She exercises that same strength with "In the Same Breath," an incisive exploration of how political narratives and public health collided in the early stages of the Covid-19 pandemic, and still do.

Her film opens simply, joyfully, in fact: Wuhan, China is celebrating the New Year. Jubilant crowds fill the streets. Their celebratory balloons float through the vast, neon canyon of the modern skyline. The next day President Xi Jinping commemorates the country’s “prosperous society.” On that same day, a bulletin streams on daily news: “Eight people were punished for spreading rumors about an unknown pneumonia.” The seemingly minor reporting, as we now know, will take on greater import. And from the vantage of August 2021, it’s impossible to look at the throngs of people, unmasked, enjoying their last hours of normalcy without an odd blend of wistfulness and fright.

Since its premiere at Sundance 2021 in January, when the development of vaccines sprung new hope, the interminable cycle of mistakes made by those combating the Delta variant has only added new contours to Wang’s sharp work. Similar to “One Child Nation,” the Chinese-American director attaches a personal lens to her studies. Wang and her two-year-old son were visiting her mother in China for New Year’s. The public’s awareness of the virus, at the time, was nil. Upon returning to the United States for business, Wuhan went into lockdown, catching Wang, who left her son with her mother in China, by surprise. Though she would eventually bring her son back to America, the event spurred her instinct for truth finding.

At its core, Wang’s film concerns how governments consolidate greater power by crafting narratives out of tragedy. She begins by parsing China’s actions, how the state-run media shaped the story to downplay the severity of the problem while selling a pro-regime message of positivity. In one startling sequence, a Brady Bunch array of news anchors repeat, word-for-word, the same report: “No evidence of human-to-human transmission.” Wang also calls attention to the steady stream of positive documentaries, with Hallmark titles like “Life Matters,” “Fighting Covid-19,” and “Chinese Doctors - Angels in White,” that proliferated China’s airwaves. At her best, she translates the sinister intentions bubbling underneath the suspicious patterns to uncover the machinations employed by manipulative regimes.

After scrutinizing the government’s response, she then turns her efforts toward a human scale: how an older couple, Chen Runzhen and Liu Deyan, owners of a Wuhan clinic, first encountered locals complaining of colds in December 2020. The clinic’s CCTV footage of the stream of people entering for medication is chilling, particularly when a woman in a white coat with a nervous laugh tells them, “I’m afraid that I’ll die.” Liu himself would contract the virus, only to be turned away by multiple hospitals while seeking treatment. We can surmise that these places knew Liu didn’t contract a simple respiratory infection, and that the parameters for refusing sick patients used by hospitals came from on high. By employing a guerilla crew to install cameras in hospitals, allowing her to direct remotely, Wang exposes the trickle down of government doctrine influencing the local level for the flood that it is.

Beyond the director’s advanced understanding of China, another component of her particular perspective, the way she straddles two worlds of the West and East helps to separate “In the Same Breath” from other documentaries about Covid. Her narration, explaining her astonishment for missing similar signs of propaganda in the United States and how the Trump administration spun the virus as a mere cold, tears apart the assumptions we hold of our governmental systems. Her juxtaposition of censorship afflicting Chinese citizens from speaking out—from telling the truth to the rest of the world—against the ways freedom of speech in America slowed the proper response to the virus, is just as balanced.

These details welcome a wave of frustration, especially as healthcare workers share their ordeals. In one montage, Chinese nurses, shot head-on, try holding back the tears that are rolling from their eyes under their masks. Every one-on-one interview with an American healthcare worker, whether discussing a shortage of PPE or the immense amounts of death witnessed, results in a heartbreaking breakdown. Their shared trauma is made all the more distressing because of the time separating them. America had three months to avoid the same fate, and yet government interests overrode public safety.

Wang concludes her film on an agonizing, but no less honest note: an innumerable total of people have died in both countries (the exact total is still withheld in China). But something else has been lost, or worse yet, gained. Power. Ideologies are being leveraged. A proxy war of influence is being fought (countries have used vaccine distribution as forms of consolidating favor with other countries). The Delta variant is currently spinning out of control due to individual and systemic negligence. But governments have never been stronger. That’s the devastating forest for the worrying trees that Wang wants us to see. With her harrowing film “In the Same Breath,” Wang has established herself as the preeminent documenter of the pain inflicted by oppressive regimes on their people.

Now playing in select theaters and available on HBO on August 18. 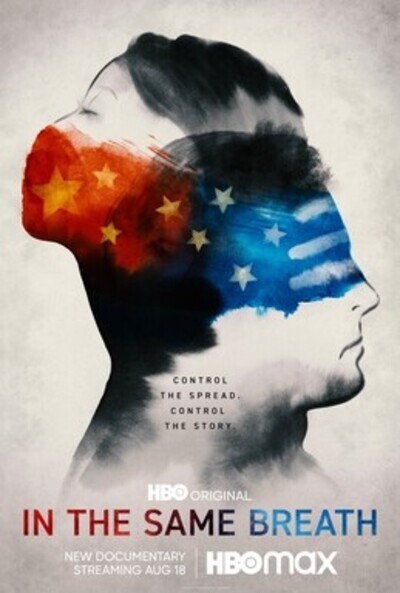