Future generations wishing to study the COVID-19 pandemic already have two documentaries to start with. Less than two months ago saw the release of “Totally Under Control,” an alternately frightening and enraging in-depth look at how the U.S. government bungled its early response to the pandemic and left us woefully behind in combating it to this very day. Now comes “76 Days,” an equally harrowing film that goes even further back, observing the struggles of both frightened patients and harried medical workers in Wuhan when the city was placed under a 76-day lockdown.

The story of how the film came to be is interesting enough to perhaps one day become the subject of its own movie. In the earliest days of the pandemic, some hospitals actually welcomed the presence of the media to help get the word out about what was happening. Hao Wu was there doing research for a pandemic film for a U.S. network when he met two other reporters, Weixi Chen and another who has chosen to remain anonymous, and they agreed to collaborate until a media crackdown in late March forced that to come to an official end. After returning to the U.S. and quarantining in Atlanta, Hao began putting together a rough cut of their footage, shot at four different hospitals, and which was smuggled digitally past officials. When the aforementioned network elected not to go ahead, he got back into contact with the other two and they worked to complete it anyway.

The opening sequence, filmed in the chaotic early days of the pandemic, is as nightmarish as anything ever presented in a horror film and this time, one cannot merely think to themselves "It’s Only A Movie ..." Hordes of cold, frightened, and potentially sick people are banging on the doors trying to get in, while an already overworked hospital staff tries to maintain some kind of order to prevent them from being completely overrun. Those workers are also forced to deal with a critical lack of resources—what is to be done when a patient is in imminent need of intubation but the equipment required to do so is not there? Pushed to the brink of exhaustion, these workers do everything in their power to take care of their patients, but it's not always enough. This leads to a particularly devastating moment in which a woman is reduced to hysterics as she begs the doctors to let her see her just-deceased father one more time as his body is wheeled away. We then see shot of a box filled with the ID cards and phones of the dead—a stark reminder of the already-growing human cost.

After that, the film settles down and uses a fly-on-the-wall approach to chart the ways in which the hospital staff—as everyone is swathed in PPE, it is virtually impossible to tell people and their positions apart—tries to attend to their scared and confused patients with little rest other than to collapse in a nearby chair for a few minutes of respite. We see them as they do what they can to pass on messages to and from family members who cannot be there, and later contacting the families to tell them when their loved ones have passed in order to return their possessions. At one point, a woman arrives to deliver a baby by C-section and they have to tell her that not only is her husband not allowed to be with her, but that her child will have to remain in the hospital afterwards while they go into quarantine.

The closest thing that the film has to a recurring character is “Grandpa,” an elderly retired fisherman with a form of dementia who continually attempts to leave the hospital and go home. This puts yet another burden on the staff when they are forced to chase him down before he makes it to an exit, and then have to deal with him weeping as he begs to be left alone. Even the most forgiving of people might get a little tired of this after a while. But as we see the staff carefully leading him back to his bed, they demonstrate a capacity for kindness and patience that would be remarkable under ordinary circumstances. Here, it comes across as absolutely extraordinary.

Of course, watching a film chronicling the opening salvo of the COVID-19 pandemic at a time when cases in this country continue to surge may not exactly strike most viewers as the most entertaining way to pass a couple of hours. That may be true, but to the credit of the filmmakers, “76 Days” has been made in such a skillful and gripping manner that even those suffering from COVID news fatigue will find themselves caught up in it. More importantly, the film will be of great value to future viewers as a time capsule from a key moment in history—one that is undeniably grim and nightmarish, but also contains enough small triumphs involving people coming together for the common good (such as the film’s very existence) to make it an oddly hopeful and optimistic one as well. 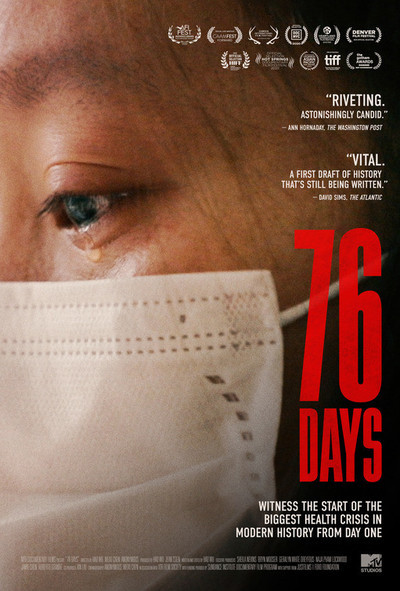